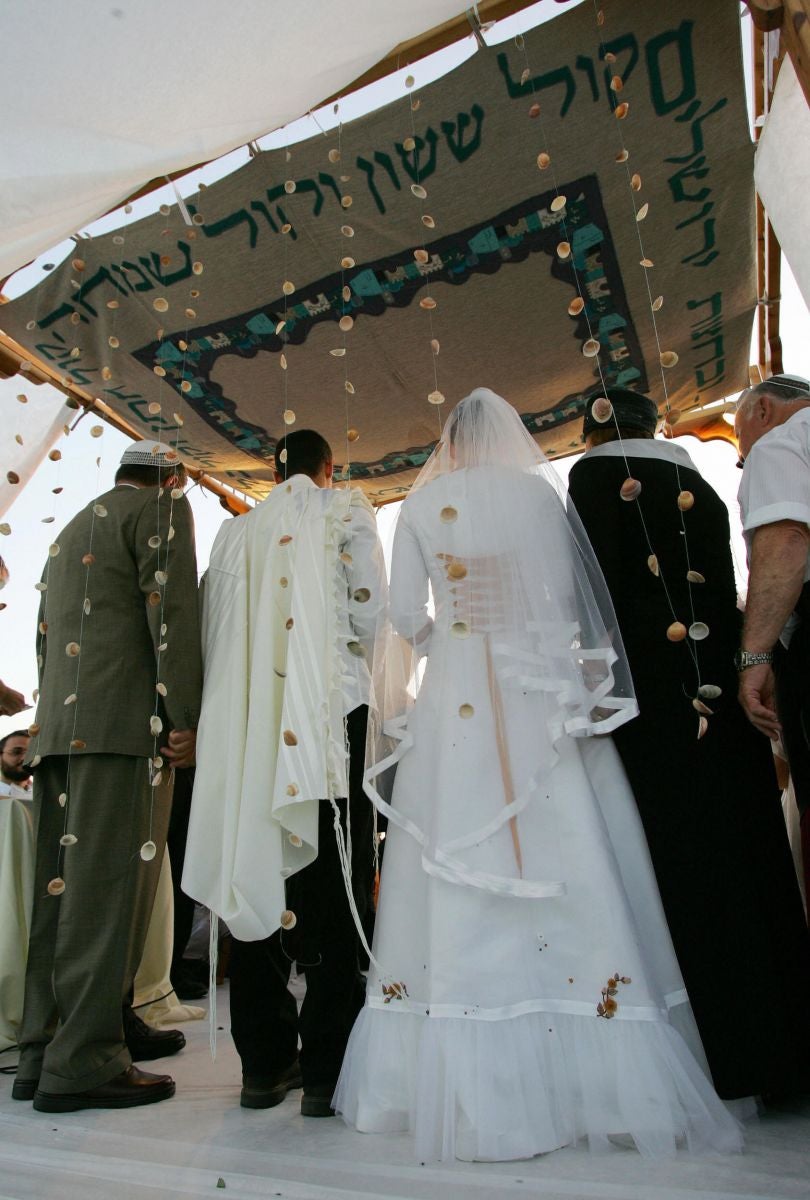 Jewish women and men are often encouraged
to marry a fellow ‘member of tribe’. Image: Getty

Since falling in love with a Gentile and betraying my religion, my heritage and thousands of years of Jewish tradition, I’ve compiled a rough list of the historical figures I have been told I am worse than: Hitler; the guy that started the blood libel; Mahmoud Ahmadinejad.

While the nice Jewish girls I grew up with were busy trying to find nice Jewish boys, I found myself taking an altogether different path with an altogether different type of boy. Despite this act of incontrovertible depravity, I feel just as Jewish as ever. I baulk at the idea of living in Kent, I believe in the healing power of chicken soup, and I still think in terms of whether or not things are ‘good for the Jews’.

But girls like me are not supposed to fall in love with someone outside of the faith. I know all the arguments: it’s my responsibility as a Jewish woman to find, marry and have children with another Jew. It is imperative my partner is MOT (member of tribe) to ensure the survival of Jews around the world.  I’m just not convinced by them anymore. And witnessing the fuss, frustration, false starts and the full-on heartbreak that the overwhelming desire to ‘marry in’ can cause simply affirms this belief.

One only need to look at the stats: a heterosexual Jewish woman in the UK looking for love with a Jewish man has roughly 0.025 per cent of the population to choose from. Of that 0.025 per cent many will either be age inappropriate, a first-degree relative, secretly gay, a carbon copy of Alexander Portnoy or worse, already married.

The imperative — in the face of such unfavourable odds — for young Jews to cop off and one day have Jewish babies has given rise to ‘Booze 4 Jews’ at universities across the country, plus a mosaic of youth organisations with the promulgation of Jewish genes as a prime concern.

Then there’s the shaming of those who choose to marry outside the faith, like the tight-lipped matriarch who turned up to her daughter’s wedding an hour late and in a pair of jeans. From the moment she took her seat, she began to voice her disapproval. Then there are mothers who don’t show up at all.

It’s not my place to judge those who only want to date other Jewish people. But it terrifies me that I might not have gone out with my boyfriend on the basis of his religious background. To me, it seems an even more arbitrary thing to object to than the colour of his eyes or his fashion sense.

Yes, another Jew might have had a similar upbringing and thus have a similar perspective on life. Yes, they would want to bring up our children with full knowledge of our centuries-old tradition. Yes, that would bond us in a unique way. But I know that my Catholic boyfriend has the same values, morals and perspective on the world as me, despite the fact that he somehow thinks it is OK to eat shellfish.

And partially because of our love and understanding, he knows that the Jewish tradition is special and something I want to pass on to our children. I know that what bonds us in a unique way is something more than a similar upbringing –  it’s deep, head-over-heels, schmaltzy love.