When Helen Pidd took over as the Guardian’s only “Northern Editor” in January of this year, she quickly conceded that the job is “far too much for one person to do”. You don’t say. Alongside politics, business, law, sport and more, the printed press is just another industry indulging in a sycophantic obsession with the south east.

What’s more, I can prove it.

For ten weekdays in two consecutive weeks at the end of July, I monitored the regional bias of ‘national’ newspaper coverage. Looking at the eight most renowned national daily papers (The Mail, Independent, Times, Guardian, Telegraph, Sun, Mirror, and Express), I noted down which region each article covered. The results are depressingly predictable.

Even excluding stories covering Westminster, 49.1 per cent of articles which were based on a particular region, centred on London and the south east. This region only possesses 26.6 per cent of the national population.

With the exception of the north west (which actually received slightly too much coverage in proportion to population) and the west and south west (which received marginally less), all other regions were noticeably under-represented. 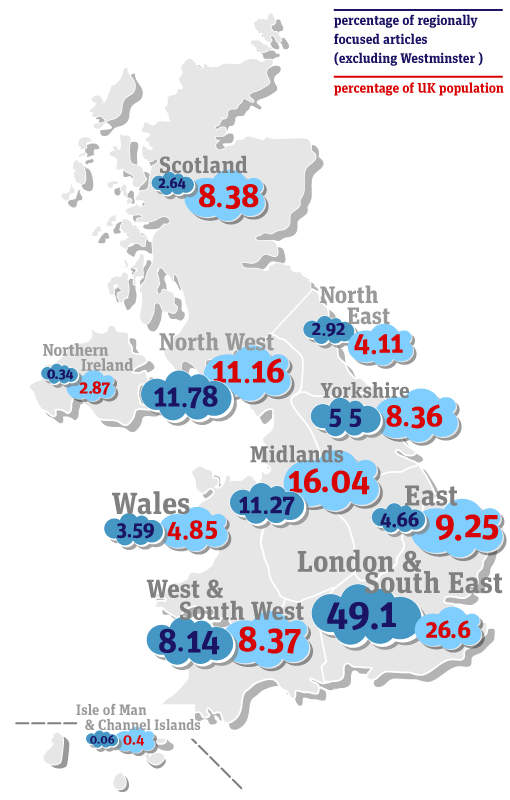 Although both of these regions have their own strong local press outlets, it’s farcical to label our main newspapers ‘national’ newspapers given these numbers. Plus, why should we assume that the rest of the UK has no interest in the affairs of other regions?

The bias becomes even more apparent when looking at articles with more than 300 words. A staggering 58.6 per cent of these articles were centred on London and the south east. Apparently there aren’t only more stories there, there is also more to say about them.

Perhaps surprisingly, the main offenders were towards the centre and the left of the political spectrum.  An astonishing 70.1 per cent of the Independent’s regionally based articles were centred on the south east. Helen Pidd’s Guardian was an easy second, but can hardly be proud of its 59 per cent. The Mirror boasts the least south east centric approach, yet still, a disproportionate 38.2 per cent of its regionally based coverage centred on the area surrounding the M25.

Of course, the natural counter to such an obvious bias is to argue that newspapers are only reporting where more news occurs. Surely London and the south east have more important institutions, more famous people, more significant events? Surely all the newspapers are doing are reflecting a broader structural concentration of newsworthy stories in the south east?

Well, no. In fact, although there is a lamentable skew of so many industries towards the south east, the newspapers themselves are still biased.

In addition to listing only regional focused articles, I also tallied those national stories which used an example from a particular region – like, for instance, the very national heat-wave we have been treated to this summer. Of these articles, an astonishing 60.1 per cent listed London and the south east as their first example. Despite the fact that the article wasn’t exclusively about the south east, and despite the fact that an example from anywhere else in the UK would have sufficed, newspapers demonstrated an instinctive tendency to prioritise the south east.