You’d think it would have been an open and shut case. An expectant mother writes in to the advice columnist of a broadsheet newspaper revealing that she has just been offered a job. ‘Friends say that I should wait and see how I feel before I commit to a new job but my husband has said he’s keen to look after the baby and become a house-husband,’ writes the pregnant Jill. Jill’s husband is freelance and doesn’t have much work on at the moment, while Jill is clearly extremely tempted at the job offer, so the decision to go back to work would not only make financial sense but is also seems to be in line with the wishes of the baby’s parents. And yet, the agony aunt Virginia Ironside’s written response was so unexpected that it not only had people composing the kind of ragey tweets usually reserved for the likes of Taylor Swift, but has led us to question the continued relevance of agony aunts in general. We’re wondering, is it time we give them the boot?

Virginia Ironside’s advice to Jill has to be read in its entirety to be believed, but some choice excerpts include ‘it would be madness to accept this job’; ‘Having a baby is a job. You’ve already been headhunted – by your child’ (strangely, Jill won’t recall an interview); and ‘A househusband recently spoke of his experiences with his baby daughter. What he found, to his distress, was that the child was incredibly backward in her speech as she grew older.’ Such kneejerk fifties backwash (‘backward’? Really?) seems incredible in this day and age. In fact, we hazard that Ironside’s advice might be even more ‘backward’ than that toddler.

Agony aunts haven’t always had a reputation for giving bad advice. In Victorian times (when comments such as Virginia Ironside’s would not have seemed anachronistic), advice columnists appeared to have carried all the sharp tongued, terrifyingly formidable authority of Lady Bracknell. In fact, there’s a whole book, called Never Kiss a Man in a Canoe (good advice, we feel), devoted to such responses as ‘do give up all that nonsense and be a sensible girl’ and ‘a nice, new bonnet might be acceptable in the form of a peace offering’, not to mention ‘no wife should have a soul above buttons’. The problem is that things have moved on quite a bit from then. But the Agony Aunts? Not so much.

Virginia Ironside’s ticking off of the pregnant Jill (‘you clearly have no idea what a huge responsibility it is to bring a baby into the world’) is by no means an isolated example. A few months ago, a young woman of 29 wrote into the Times (£) concerned that the fact that she had slept with 25 people might alarm her new boyfriend. Assuming the woman in question lost her virginity at sixteen, this number amounts to under two sexual partners a year. A pretty normal figure, then, and, actually, probably the bare minimum number of sexual partners required for anyone who’s been single for a long time and is keen to avoid contracting repetitive strain injury from frenzied masturbation. And yet the agony aunt’s response? ‘I don’t wish to alarm you but that is more than four times the national average for a woman of your age!’

Now, we’re aware that those with problems often look to agony aunts for some hard truths which their friends, what with their empathy and their desire to stay on your good side because you’re the only one not on 5:2 and thus still have a sunny personality and pizza in your fridge, might not be keen on troubling you with. We know that. But essentially calling a lass a slag in the pages of a national newspaper, or indeed a bad mother, is not exactly modern (and in addition, massively unhelpful). Nor was telling a victim of domestic violence and sexual abuse ‘less of the drama’, as Mariella Frostrup did at the end of last year when the woman wrote to her lamenting how her friends refused to believe her account of what had happened to her. Or, indeed, advising a woman whose boyfriend had described her vagina as ‘repulsive’ to give her boyfriend an ‘educational DVD’, when really what she should have given him is an educational dumping of his ass and a DVD of the sort which might allow him to deduce if his sexual tastes might not lie nearer the other end of the rainbow (props to Pamela Stevenson Connolly for that one). 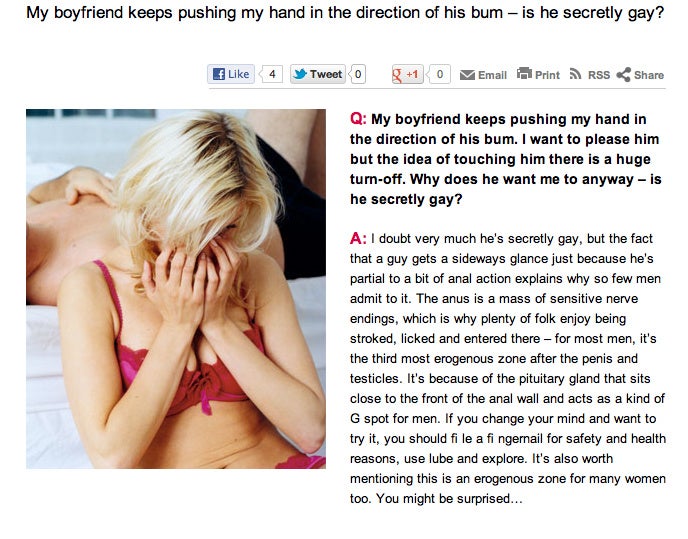 And this month’s Cosmo isn’t much better, with ‘sex psychotherapist’ Rachel Morris telling a young woman upset at the fact that men ignore her after sex to ‘close your legs and open your eyes.’ ‘Learn to talk to men rather than flirt with them’, she orders, having somehow made the assumption that henceforth her correspondent has been too busy hypnotising men with her vagina to engage them in conversation. Meanwhile, a woman who is finding her lovers sexually dissatisfying is coldly told that one can’t expect good sex from ‘random lovers’. ‘You will have great sex again- with the next guy you spend some time getting to know’, Morris blindly predicts.

With such terrible advice abounding, it’s no wonder we’re questioning just how good these columns are for women. They so often house an archaic agenda, inhabiting a world where casual sex is off limits and women are expected to submit to the caprices of their male partners. After all, how different is putting up with a boyfriend who describes your vagina as ‘repulsive’ from having ‘no soul above buttons’? At their heart, both notions place a man’s contentment before the wellbeing of the woman seeking advice. If we had a pound for the number of times we saw a young woman who has written in upset that her boyfriend went to a strip joint dismissed out of hand and told to accept these ‘laddish antics’ we’d have, well, at least fifty quid. Even worse, we know that teenage girls read these advice columns and take them seriously (take the teen magazines of the nineties’ obsession with toxic shock syndrome, rendering some of our generation of young women absolutely terrified of tampons for months, if not years, afterwards). With internet advice forums that allow the reader to see a mass of perspectives becoming more and more popular, perhaps it’s time we kicked these agony aunties, these vestiges of another time, directly to the kerb. Because, while they’re almost always female, they really don’t seem all that feminist.