Rarely a day now passes without ministers looking to impose new conditions on welfare claimants. The latest proposal under consideration, as today’s Guardian reports, is for low-paid workers to be forced to work more hours or face losing their benefits.

Ahead of the national launch of Universal Credit in October, a DWP document notes that “the current Jobseekers Allowance caseload will be joined by current claimants of tax credits/housing benefit who are working less than could reasonably be expected.” It adds: “The Welfare Reform Act enables us to place a wide range of mandatory requirements on this group (e.g. work search, work availability and work preparation requirements). Any requirement must be intended to help them find work, more work or better paid work.”

Universal Credit claimants will be divided into six groups (see below): working enough (individual and household), working could do more, not working, too sick to work right now, too committed to work right now and too sick to work. It is the second of these groups that the proposals are concerned with. The DWP suggests that claimants could be required to move job if and where “other avenues (additional job, more work with same employer) have proved unsuccessful”.

Responding to the department’s “call for ideas”, a new Policy Exchange report recommends that all new in-work claimants should be required to attend an initial interview at a JobCentre “where a conditionality regime should be set up to ensure the individual is doing all they can to increase their hours and earnings”. It adds that claimants should then be forced to attend a quarterly meeting “to be reminded of their responsibility to try to increase their earnings”, with sanctions applied for failing to attend. 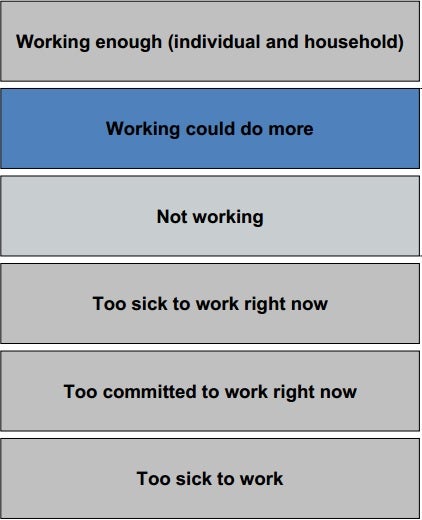 Ministers will no doubt argue that the plans are aimed at assisting the 1.4m people who are working part-time because they could not find a full-time job. The Policy Exchange report found that only 30 per cent of part-time workers who expressed a desire for full-time work were actively looking for it. Ministers will merely help push claimants in the right direction. But given the routine abuse of existing benefit sanctions by job centres, the danger is that this will become an underhand means of reducing the welfare bill.

And, rather like the suggestion that the minimum wage could be frozen or cut, the proposals sit uneasily with some of ministers’ recent rhetoric. At last week’s Resolution Foundation event on low pay, the skills minister Matthew Hancock (George Osborne’s former chief of staff) argued that people were wrong to suggest that “working longer hours is the best way to boost earnings, and that getting people to work longer hours will help solve our economic problems.” He observed: “Now I love my job, and work a humungous number of hours. And while many people in this room might do the same, let me let you into a secret: we’re unusual.

“Working more hours may be a necessary thing, but it’s not necessarily a good thing. It means less time to see the family; less time in the garden. Less free time. I’m in favour of more freedom. If the cardinal sin of modern economics is assuming that markets are always rational, then the second great failing is forgetting who we’re in it for.”

If ministers are to avoid alienating the very “strivers” they purport to support, they should heed Hancock’s words.