The photograph below is all that the majority of parents with young children will see of the Independent today, waiting in supermarket queues or flicking through magazine racks. The front page quotes a doctor – never mind that he was struck off in order to protect patients – saying he was right about the MMR-autism scare. And so the zombie controversy rises from the dead again. 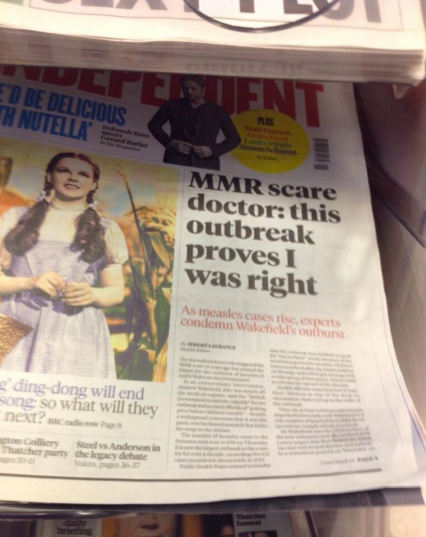 There are three realities that need to be addressed here right at the start. First, the MMR vaccine is safe, many tens of millions of doses have been administered worldwide, the data show no link between MMR and autism. As with any medicine there are occasional side effects, in some cases these might be serious, but the benefits far outweigh the slight risks.

Second, single vaccines are less safe than MMR. They are less convenient, leading to poor uptake and more children being unprotected for longer; and they have had far less testing.  If the NHS were to start touting single vaccines as an alternative then not only would it have a negative impact on public health, it would be taken as evidence that the problem was real, potentially leading to a catastrophic loss of public confidence in vaccines (remember Tony Blair’s role in all of this).

Third, Andrew Wakefield is about as discredited as it is possible for a doctor to get. He was found to have ordered invasive investigations on children without either the qualifications or authority to do so. He conducted research on nine children without Ethics Committee approval. He mismanaged funds, and accepted tens of thousands of pounds from lawyers attempting to discredit the MMR vaccine, being found by the GMC to have intentionally misled the Legal Aid Board in the process.  He was not just dishonest, unprofessional and dangerous; his contempt for the rules and regulations that safeguard children in research projects was vile.

Wakefield’s research was unconvincing at the time and swiftly refuted, yet the ‘controversy’ over MMR has raged for years, fuelled almost entirely by credulous idiots in the media.

“The media repeatedly reported the concerns of this one man, generally without giving methodological details of the research, either because they found it too complicated, inexplicably, or because to do so would have undermined their story. As the years passed by, media coverage deteriorated further. Claims by researchers who never published scientific papers to back up their claims were reported in the newspapers as important new scientific breakthroughs while, at the same time, evidence showing no link between MMR and autism, reviewed academic journals, was simply ignored. This was cynical and unforgivable.”

And yet, three years after Wakefield was struck off and the Telegraph’s best journalist, Tom Chivers, wrote “so, farewell then, Dr Andrew Wakefield”, here we are again with Britain’s most dangerous doctor since Harold Shipman given pride of place on the Independent’s front page.

The villain, now firmly at the heart of America’s quack autism-cure industry, has come to gloat even as 60 measles-afflicted children are sent to hospital beds in Swansea. 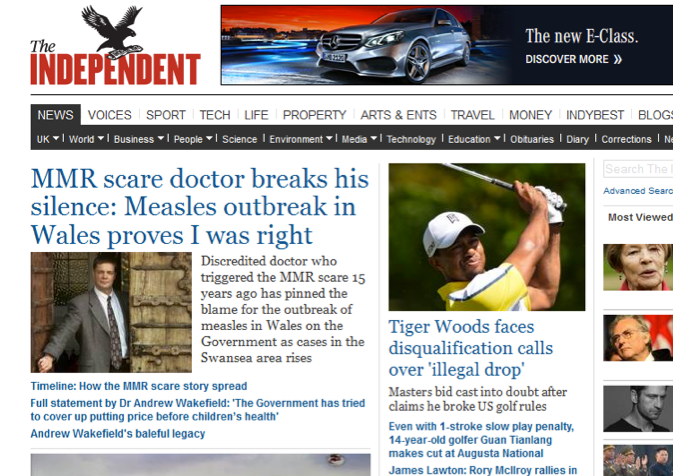 What impression does the Independent website give of the MMR ‘controversy’?

On Twitter, the Independent’s health writer Jeremy Laurance has spent the day demanding that critics read the whole piece. “Jeeezus!”, he responded to Ben Goldacre and others at one point, “U have NOT read the story.” What Laurance fails to understand is that few people ever do read the whole story. Any competent journalist understands that people tend to grab the information at the top, and don’t always stick around until the end of the piece.

And besides, it’s not just the headline. Laurance’s article continues to put Wakefield’s point of view for a further 14 paragraphs, before giving over barely half that space to one contrary voice, addressing only a fraction of the points made. It would be a great example of the false balance inherent in ‘he-said, she-said’ reporting, except that it isn’t even balanced – Laurance provides a generous abundance of space for Wakefield to get his claims and conspiracy theories across, and appends a brief response from a real scientist at the end.

The Independent’s deputy editor, Archie Bland, protests that ‘it’s not as if we give [Wakefield] unqualified airtime’. Well no, but few disclaimers – calling him ‘discredited’ for example – do not address this problem of giving Wakefield a big national platform in the first place.  As Dave Jones puts it, “why do the media give a lone, discredited voice in the darkness an equal platform as the whole body of scientific evidence? Is that balance?”

On top of this, Wakefield gets his own entire article, a further 12 paragraphs apparently copied verbatim from a days-old press release, linked to prominently on the Indie’s homepage. This isn’t health journalism, it’s simple, unadulterated PR.

Earlier, Ben Goldacre asked Laurance the following on Twitter: “How on earth can the Independent justify running 12 paragraphs today on MMR by Wakefield himself?” Laurance replied, “So what do u suggest? That we ignore him and let him go on spreading poison? Or answer him, point by point, as we have done?”

Jeremy Laurance has a history of reacting badly to the idea that health and science journalists deserve scrutiny. What he doesn’t seem to grasp is that this is not an abstract public health debate between a few angry people on Twitter – he, and journalists like him, are putting the lives of real children at risk, their clumsy reporting stoking unwarranted fears about a safe vaccine.