At least, that’s what today’s Mail on Sunday front page story would have you believe with its front page headline: Queen fights for gay rights. 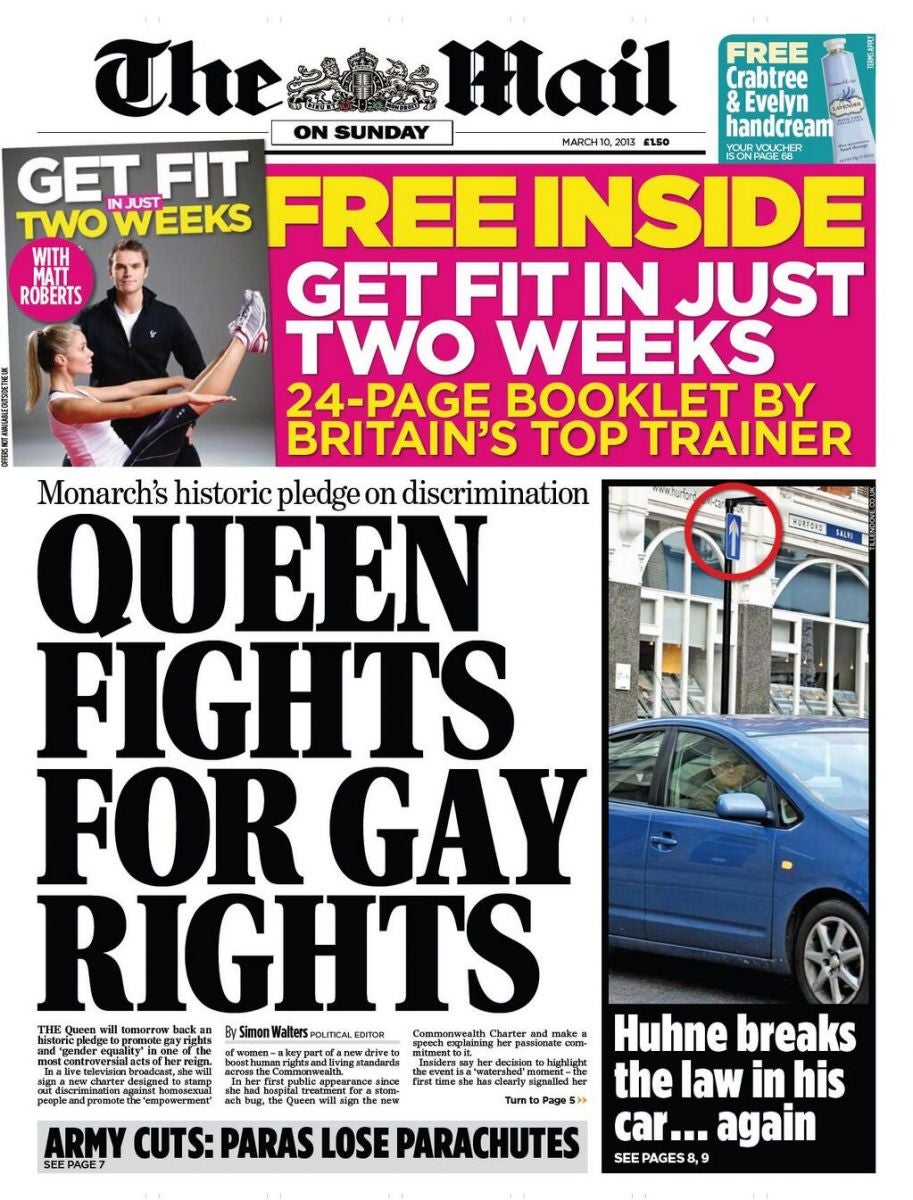 Simon Walters, who was this week named Political Journalist of the Year at the British Press Awards, reports:

The Queen will tomorrow back an historic pledge to promote gay rights and ‘gender equality’ in one of the most controversial acts of her reign. In a live television broadcast, she will sign a new charter designed to stamp out discrimination against homosexual people and promote the ‘empowerment’ of women – a key part of a new drive to boost human rights and living standards across the Commonwealth.

Leaving aside “an historic” – which makes me wince – what is this controversial pledge? It’s the new Commonwealth Charter, which states: “We are implacably opposed to all forms of discrimination, whether rooted in gender, race, colour, creed, political belief or other grounds.”

The ‘other grounds’ is intended to refer to sexuality – but specific reference to ‘gays and lesbians’ was omitted in deference to Commonwealth countries with draconian anti-gay laws.

So, to recap: the Queen is today making a speech about the new Commonwealth Charter, which she did not write, and indeed, she did not have any say in its wording. In the charter, there is a reference to discrimination on “other grounds”, which are not made explicit.

Furthermore, as Walters himself acknowledges, several Commonwealth countries have harsh anti-gay laws. In Uganda, for example, homosexuality is already criminal offence: but that was not enough, and in 2009 legislators tried to institute the death penalty as punishment. That “Kill The Gays Bill” is still working its way through parliament. Homosexuality is also illegal in Trinidad and Tobago, Nigeria, Tanzania, Pakistan and others (see a full list of Commonwealth countries here and of anti-gay laws here).

So: the charter says nothing about gay rights, and several Commonwealth countries execute gay people. It would clearly be wonderful if the Queen were fighting for gay rights, but . . . she’s really not.

So what’s this story all about?

In her speech, the Queen is expected to stress that the rights must ‘include everyone’ – and this is seen as an implicit nod to the agenda of inclusivity, usually championed by the Left.

Oh, the Left. I knew they would have something to do with it. To be honest, I think the Queen – the head of state of more than a dozen countries – is fine with “women’s empowerment”. Who needs to wear a Union Jack dress when your face is on everyone’s money?