“Dole Queen Owns Horse!” screeched the front page of yesterday’s Sun. This masterpiece of balanced headlining ran alongside a full-length picture of a distressed-looking pregnant woman who is due to be relocated into an extravagant new home at the government’s expense. The thirty-one year old, who has never held a full-time job, will shortly be moving into a twenty-bedroom palace with a fleet of staff, all funded by the taxpayer at a cost of hundreds of thousands of pounds per year. Kensington Palace, to be precise. The state is to fund the redecoration of every room to suit the unemployed mother-to-be and her husband, who is also out of work after a brief stint in the army. 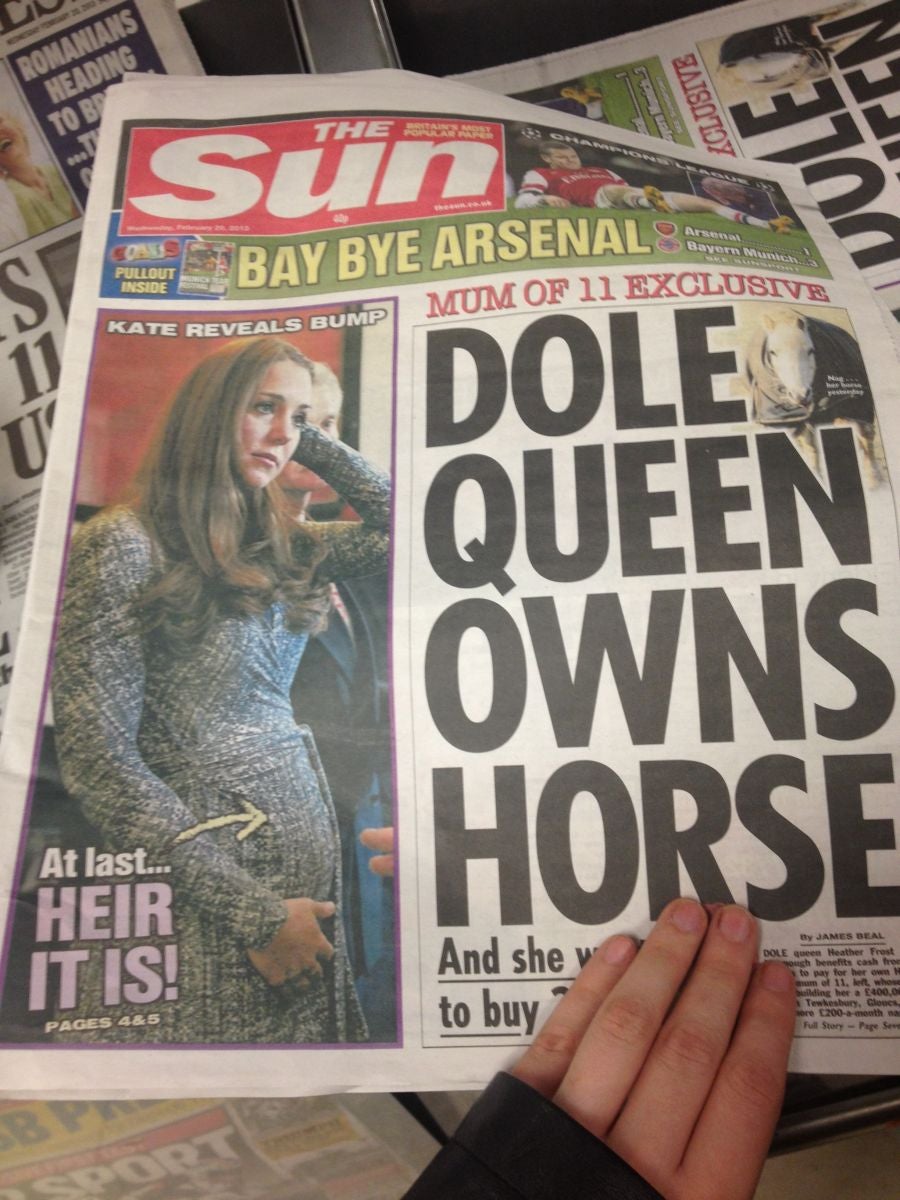 By now, the twisted logic of tabloid mob-whippery dictates that a small host of outraged citizens carrying pitchforks, cameras and branding-irons should be forming to descend on Kensington. The public must be demanding to know who this brazen madam thinks she is and why she’s being allowed to have a kid on the state and hundreds of millions of pounds in handouts instead of accepting a slow slide into alienated penury like the rest of us. Throw the hussy to the vultures! Smear her face over every front-page, have her chased from her home by packs of wild paparazzi! Confiscate her uterus! Rent out the offending organ to wealthy Chinese families until the surrogacy fees have paid back the exorbitant cost of her outrageous hyperfecundity to the public purse! If we’re not careful, every scrounging harlot this side of Anglesey will grow up thinking that the recipe for an easy life is to amass a collection of elegant wrap-dresses and marry the hereditary heir to the Duchy of Cornwall. The shame of it.

Rather than string this one out until it snaps, let’s be absolutely clear that we’re talking about the Duchess of Cambridge here. By an unhappy oversight of tabloid subediting, Kate Middleton’s picture appeared yesterday in every paper looking slightly sad about some slightly mean things said about her by a Booker Prize-winning author, alongside headlines attacking Heather Frost, mother-of-eleven, for daring to be rehoused by a local council that has a statutory duty to do so. That these two stories have hit the front pages this week tells you most of what you need to know about class and media manipulation in Britain today.

Dispatch: Putin’s answer to the Ukrainian crisis might lie in Georgia

Tabloid persecution of individuals in receipt of welfare benefits is practically encouraged by the Department for Work and Pensions, which has been known to feed its tame papers stories about “benefit scroungers” to drum up support for its policy of plunging hundreds of thousands of children into poverty. Say anything the least bit critical about the Duchess of Cambridge, however, and you’ll get an official reprimand from the PM, or worse. If Hilary Mantel’s subtle and incisive essay merits public excoriation of this sort, I’m expecting a team of black-baggers to burst through my window at any second once they find my back-catalogue of republican rantery – so please forgive any spelling mistakes. I’m writing this column at speed, in the dark, hiding under the bed.

Before they come to take me away, let’s look at the figures. Frost’s large family costs the British state some £30,000 a year, as opposed to the £30m paid to the Queen per annum, on top of the Royal family’s land-based income and travel and living expenses. The morality of having a child at state expense is not what I want to discuss here: the key difference between Kate Middleton and Heather Frost is that the Duchess’ future children will never be at risk of poverty, whereas Frost’s are. In fact, in the sixth richest country in the world, over a quarter of children and young people live in poverty. The morality of that uncomfortable little statistic is never questioned, because Frost’s real crime in the ledger of proto-fascist tabloid morality is not the fact that she has a lot of children, but the fact that she is poor. Every millionaire in Britain will be receiving a £42,000 tax cut come April, and none of them are being shamed for it on the front page of the Sun.

There are two types of outrage permitted on of this bitter little island right now: dog-whistle disgust for the extremely poor and spanielish devotion to the aristocracy. If we’re going to talk about large, dysfunctional families gaming the system and spoiling democracy for hard-working, law-abiding, ordinary citizens, the discussion should start and finish with the House of Windsor. The royals and their retinue cause more damage to the British psyche than any luckless single-parent family scapegoated by the tabloids, and it’s a cost that goes way beyond the financial implications of the Civil List. Yesterday’s headlines, like tomorrow’s and next week’s, tell the people of Britain in terms as stark and brutal as an eviction notice: ask for nothing, doff your cap, and know your place.