Back when we just thought some horse meat had crept (trotted?) into a few supermarket value burgers, it didn’t seem to be something you had to take particularly seriously. What’s wrong with eating horse, we cried. They do in Europe, and everyone knows their food is better – in fact, my colleague Charlotte Simmonds put together some delicious-sounding Italian recipes, in case any readers felt inspired to give it a go. At worse, it was felt to be a failure of the supermarket to keep people informed about what they were eating – if something says “beef burger” on the label, it’s not really on to fill the packet with horse instead, is it? Jokes were made on Twitter, most of them awful, and the story gradually died away.

Now, though, it’s back with a vengence. Aldi and Findus have both withdrawn ready meals from sale after it was alleged that its beef lasagne contained only horse meat. The environment secretary, Owen Paterson, is touring the television stations this morning, urging people not to panic but warning of “more bad news” when further test results are published on Friday. Many of the papers have looked into the story in some detail, and lots of different angles are emerging. Here’s your handy guide to what’s happened so far.

Sources close to the Department for the Environment, Food and Rural Affairs and the Food Standards Agency (Defra) told the Observer that the whole horse meat furore was the result of fraud that had an “international dimension”. Polish and Italian mafia gangs apparently run vast schemes where they substitute horse meat for beef during the food production process. Owen Paterson said: “I’m concerned that this is an international criminal conspiracy here and we’ve really got to get to the bottom of it.” The Independent on Sunday has investigated the complicated pan-Europe supply chain arrangements that have lead to this situation – read their account here.

Could it make you ill?

The Mail reported that food inspectors are concerned that some of the meat that ended up in the “beef” lasanges could contain E.coli. One of the companies that supplied Findus with meat – French firm Spanghero – had previously been investigated for a similar scare.

Observer science editor Robin McKie writes that there’s a potential risk from a drug called bute or phenylbutazone that is given to horses to “relieve pain and treat fevers”. If still present in the meat, it can have side effects in humans, such as triggering “a serious blood disorder known as aplastic anaemia”. According to the Sunday Telegraph, there is also a possibility that some of the horse meat came from Romania, “where a virus called equine infectious anaemia is endemic, and has led to a ban on live exports”.

What are we doing about it?

For now, more tests. There are more results due on Friday, which is why Owen Paterson is talking a lot about “more bad news” this morning. After that, more tests, more regularly – the Food Standards Agency should be doing DNA testing every three months, Paterson has said. The BBC’s Andy Moore has said that up til now, the food industry has “relied on a system of self-policing”, a phrase that has rather loud echoes of the way we talked about banks after the 2008 crash. An Observer editorial calls for more independent regulation and more on-site testing – expect more discussion of this in the next few days.

Is this BSE all over again?

No. But British farmers are angry at any suggestion it could be. National Farmers’ Union president, Peter Kendall has said: “Our members are rightly angry and concerned with the recent developments relating to contaminated processed meat products. The contamination took place post farm-gate which farmers have no control over.” However, in one regard, it could be similar. As Judith Woods pointed out in the Telegraph,  both the BSE controversy and now this horse meat problem have affected consumers’ trust that what they read on a packet is really what’s going to be inside.

Have the papers gone horse gag-mad?

Surprisingly, and almost disappointingly, today’s front pages feature very few horse jokes (perhaps indicating that this is now A Serious Story.) Only two splashed on it. The Sunday Telegraph: 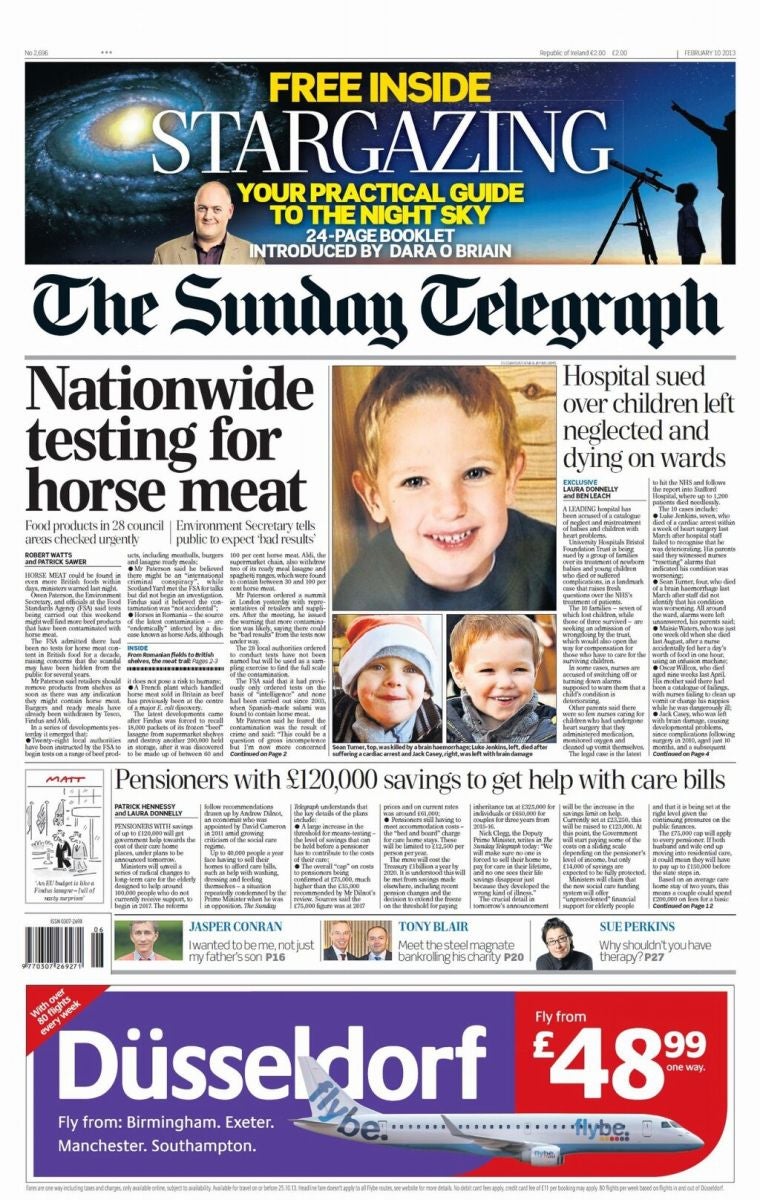 And the Independent on Sunday: 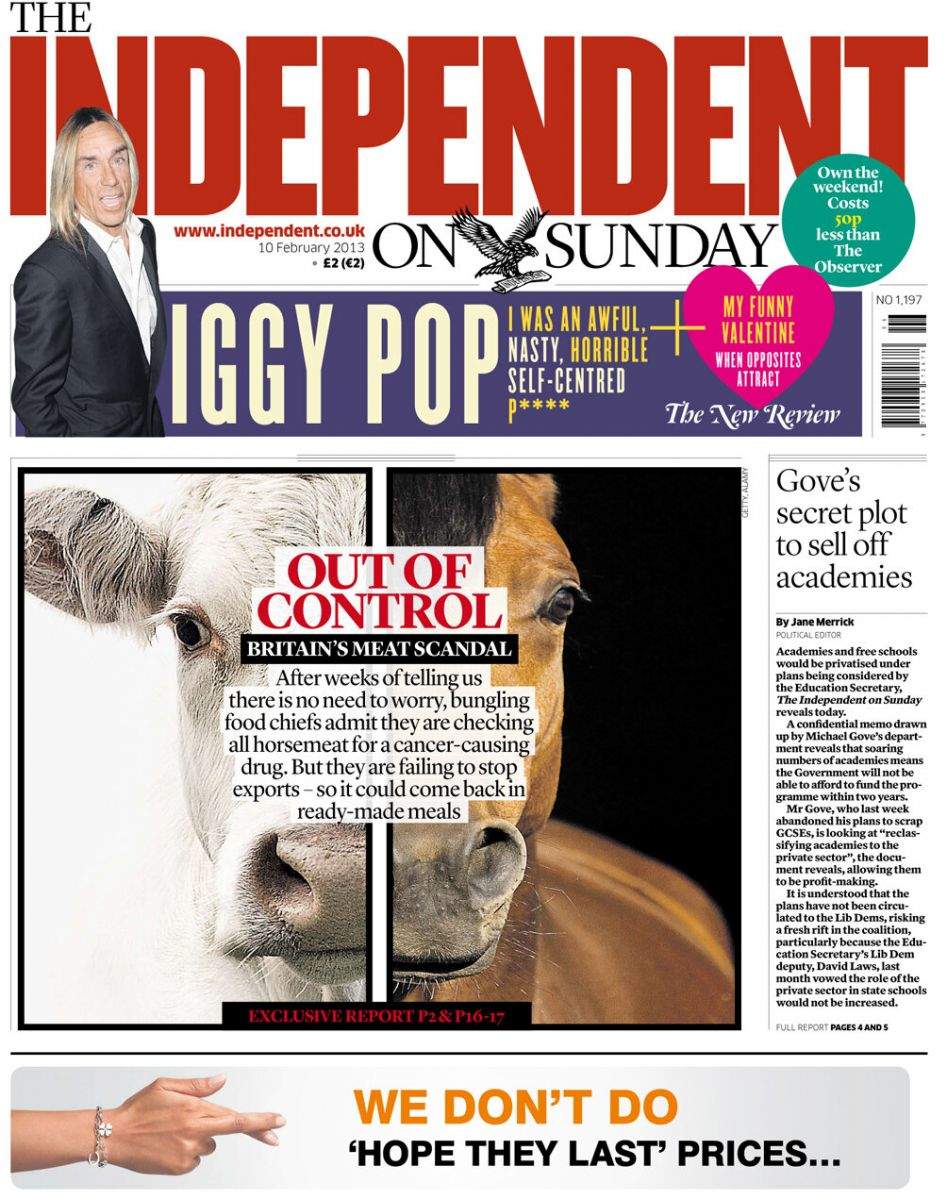 I, for one, was sad not to see the Racing Post take it on: 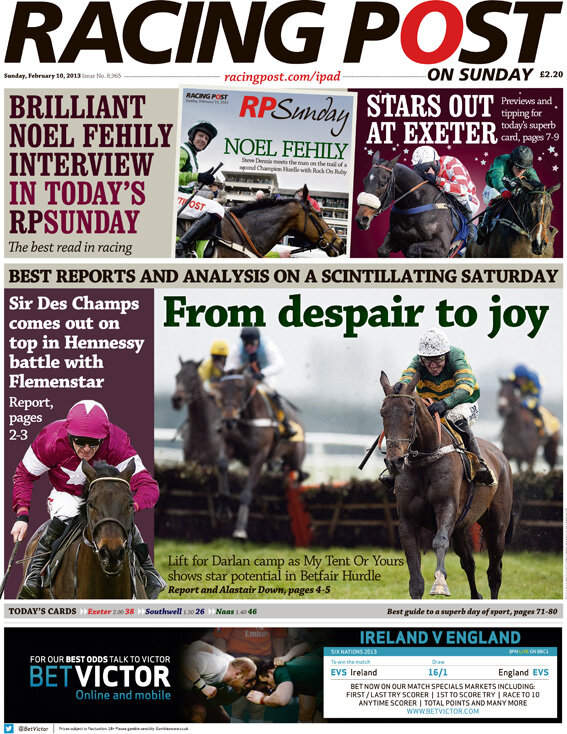