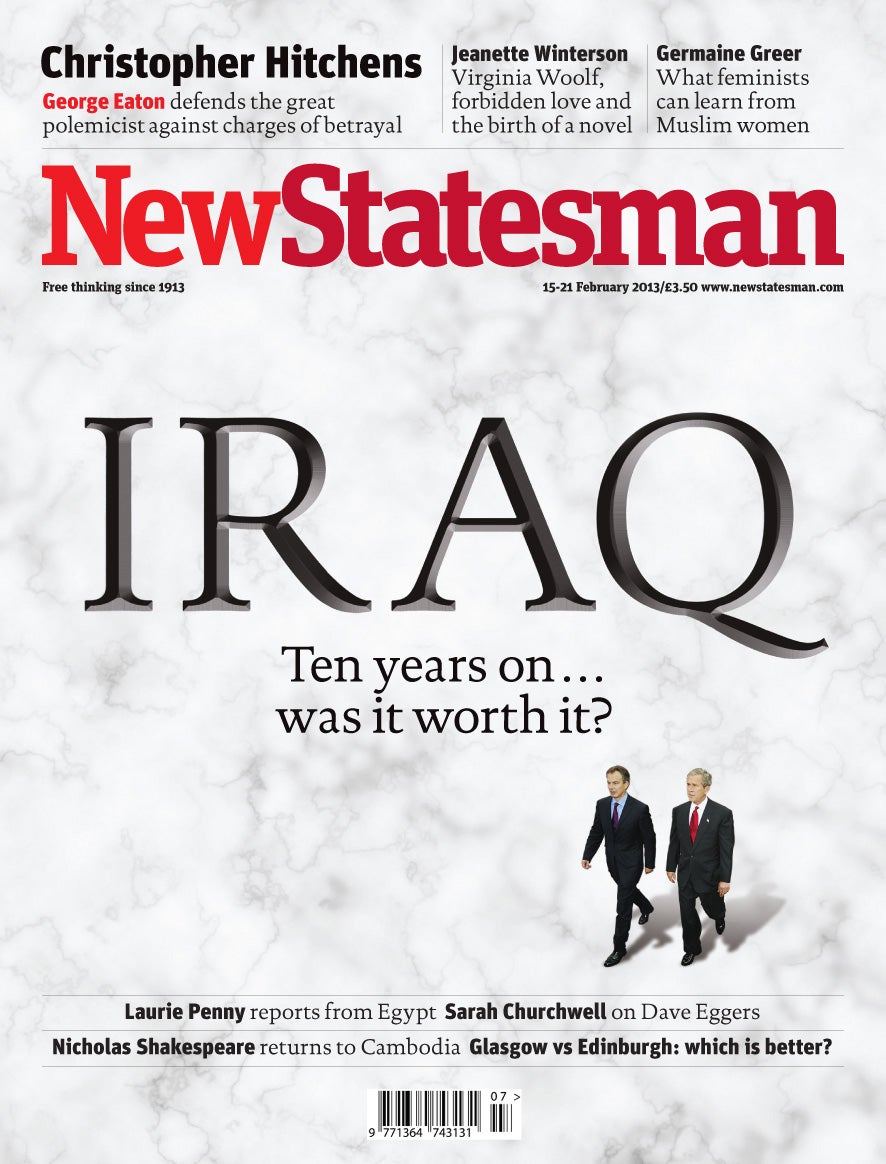 You are invited to read this free preview of the latest issue of the New Statesman, out on 14 February. To purchase the full magazine – with our Iraq cover package including this piece by Mehdi Hasan alongside articles by John Lloyd, Caroline Hawley, Adnan Hussein and Ian Taylor, as well as our signature mix of opinion, longreads and arts coverage – please visit our subscription page.

On Saturday 15 February 2003, more than a million of us – students, toddlers, Christians, Muslims, nuns, Telegraph readers – gathered in Hyde Park for the biggest public demonstration in British history. “Not in my name,” we chanted, as a series of speakers – from Charles Kennedy to Jesse Jackson – lined up to denounce the impending invasion of Iraq.

In Glasgow, a sombre yet defiant prime minister delivered a speech to Labour Party activists. Responding to the march in London, Tony Blair declaimed: “The moral case against war has a moral answer: it is the moral case for removing Saddam.” He continued, “It is not the reason we act. That must be according to the United Nations mandate on weapons of mass destruction. But it is the reason, frankly, why if we do have to act, we should do so with a clear conscience.”

Whether or not Blair’s conscience remains “clear” is, as he once pointed out, between him and God. But a decade on from the debate about dodgy dossiers, WMDs, 45-minute warnings and various clauses and subclauses of UN Resolution 1441, those of us who marched against the war stand vindicated. We were right; the hawks were wrong.

It isn’t the size of our demonstration that those of us against the war should be proud of, it is our judgement. Our arguments and predictions turned out to be correct and those of our belligerent opponents were discredited. Remember the rhetoric? There was “no doubt” that the invaders would “find the clearest possible evidence of Saddam’s weap­ons of mass destruction” (Blair) as well as evidence of how Iraq had “provided training in these weapons [of mass destruction] to al-Qaeda” (Colin Powell); the foreign troops would be “greeted as liberators” (Dick Cheney); “the establishment of a free Iraq at the heart of the Middle East” would be “a watershed event in the global democratic revolution” (George W Bush).

It was a farrago of lies and half-truths, of delusion and doublethink. Aside from the viewers of Fox News, most people are now aware that there were no weapons of mass destruction in Iraq, no ties between secular Saddam and Islamist Osama. The fall of the Ba’athist dictatorship failed to usher in a democratic or human-rights revolution. Every argument advanced by the hawks proved to be utterly false.

The Iraq war was a strategic disaster – or, as the Tory minister Kenneth Clarke put it in a recent BBC radio discussion, “the most disas­trous foreign policy decision of my lifetime . . . worse than Suez”. The invasion and occupation of the country undermined the moral standing of the western powers; empowered Iran and its proxies; heightened the threat from al-Qaeda at home and abroad; and sent a clear signal to “rogue” regimes that the best (the only?) means of deterring a pre-emptive, US-led attack was to acquire weapons of mass destruction (see Korea, North).

There may have been a strong moral case for toppling the tyrant and liberating the Iraqi people – but there was a much stronger moral case against doing so. Brutal and vicious as Saddam’s reign had been, a “humanitarian intervention” could not just be justified in March 2003, given the complete absence of an ongoing or imminent mass slaughter of Iraqis. Some of us warned that the cost of action, in blood and treasure, would far outweigh the cost of inaction.

And so it came to pass. The greatest weapon of mass destruction turned out to be the invasion itself. Over the past ten years, Iraqis have witnessed the physical, social and economic destruction of their country – the aerial demolition of schools, homes and hospitals; the siege of cities such as Fallujah; US-led massacres at Haditha, Mahmudiyah and Balad; the biggest refugee crisis in the Middle East since the ethnic cleansing of Palestine in 1948.

Between 2003 and 2006, according to a peer-reviewed study in the Lancet medical journal, 601,000 more people died in Iraq as a result of violence – that is, bombed, burned, stabbed, shot and tortured to death – than would have died had the invasion not happened. Proportionately, that is the equivalent of 1.2 million Britons, or six million Americans, being killed over the same period. In a typically defensive (and deceptive) passage in his memoirs, Blair described the Lancet report as “extensively challenged” and said its figures were “charged with being inaccurate and misleading”. Sir Roy Anderson, the then chief scientific adviser to the Ministry of Defence, told ministers in an internal memo that its methods were “close to ‘best practice’” and the study design was “robust”.

Presumably, denialism is how hawks sleep at night. They dispute the studies that have uncovered the human cost of the war – whether it be the civilian casualties across the country, or the torture and abuse inside Iraq’s prisons (which a UN investigator described in 2006 as “worse than it has been in the times of Saddam Hussein”), or the fivefold increase in birth defects and fourfold increase in cancers in and around Fallujah. Or they try to blame the violence and turmoil in Iraq exclusively on terrorists, “jihadists” and “Islamofascists”. Few would dispute that most of the killings in Iraq have been carried out by the sadistic monsters who fight for al-Qaeda and its affiliates. But to focus only on the crimes of AQI (or “al-Qaeda in Iraq”) represents a gross moral evasion.

First, according to the Lancet survey, 31 per cent of the excess deaths in Iraq can be attributed to coalition forces – about 186,000 people between 2003 and 2006. Second, most studies show that only a minority of Iraqi insurgents were card-carrying members of AQI. The insurgency kicked off in Fallujah on 28 April 2003 as a nationalist campaign, long before the arrival of foreign jihadists but only after US troops opened fire on, and killed, 17 unarmed Iraqi protesters. Third, there were no jihadists operating in Iraq before our Mesopotamian misadventure; Iraq had no history of suicide bombings. Between 2003 and 2008, however, 1,100 suicide bombers blew themselves up inside the country. The war made Iraq, in the approving words of the US general Ricardo Sanchez, “a terrorist mag­net . . . a target of opportunity”.

The Iraq invasion turned out to be the best recruiting sergeant that Muslim extremists could ever have prayed for, radicalising thousands of young men from the Middle East to the Midlands. Listen to the verdict of the former head of MI5, Dame Eliza Manningham-Buller: “Whatever the merits of putting an end to Saddam Hussein, the war was also a distraction from the pursuit of al-Qaeda. It increased the terrorist threat . . . [and] spurred some British Muslims to turn to terror.”

Ultimately, say some hawks, such arguments are irrelevant. Didn’t Iraqis welcome the removal of Saddam? Despite the bloodshed, isn’t their nation better off as a result of the war? Not quite. “Let me clear it up for any moron with lingering doubts,” wrote the Iraqi blogger known by the pseudonym Riverbend on her blog Baghdad Burning in February 2007. “It’s worse. It’s over. You lost… You lost every sane, red-blooded Iraqi when the Abu Ghraib pictures came out… You lost when you brought murderers, looters, gangsters and militia heads to power…”

In September 2011, a Zogby poll found that 42 per cent of Iraqis thought they were “worse off” as a result of the Anglo-American invasion of their country, compared to only 30 per cent of Iraqis who said “better off”. An earlier poll, conducted for the BBC in November 2005, found a slim majority of Iraqis (50.3 per cent) saying the Iraq war was “somewhat” or “absolutely” wrong.

Should we be surprised? The post-Saddam government, observes the noted Iraqi novelist and activist Haifa Zangana, is “consumed by sectarian, ethnic division, but above all by corruption”. The Human Rights Watch 2012 report shows how the rights of the Iraqi people are “violated with impunity” by their new rulers. In his book Iraq: from War to a New Authoritarianism, Toby Dodge of the London School of Economics documents how the war has produced an Iraqi system of government not so different from the one it replaced. Prime Minister Nouri al-Maliki, Dodge argues, is leading his country towards “an incredibly destructive dictatorship”. The establishment of a liberal democracy on the banks of the Tigris remains a neocon pipe dream.

So, Saddam is gone – but at what cost? Iraq has been destroyed and hundreds of thousands of innocent people have lost their lives, as the direct result of an unnecessary, unprovoked war that, according to the former chief justice Lord Bingham, was a “serious violation of international law”. “It was worse than a crime,” said the French diplomat Talleyrand, responding to the execution of the Duc d’Enghien by Napoleon; “it was a blunder.” Iraq turned Talleyrand’s aphorism on its head – it was worse than a blunder; it was a crime.

Mehdi Hasan is the political director of the Huffington Post UK and a contributing writer for the New Statesman. This piece is also published on huffingtonpost.co.uk