As more pictures of the four anarchists arrested last week were published today by the Greek police, a new round of controversy has set alight the Greek and international media. In an attempt to prove that the extensive abuse the suspects suffered took place during their arrest and not later as they and their lawyers claim, the Greek police’s Internal Affairs department was set on the case. Their conclusion was that, according to eyewitnesses and officers, signs of struggle were obvious and that the injuries were sustained after the suspects resisted arrest, a claim Nikos Dendias (Minister of Citizen Protection) backed and repeated himself.

This new set of pictures (contrasted against the photoshopped versions the authorities shared last week, see above and below) was also released. According to the police’s official statement, these pictures were taken around 13:00, only ten minutes after the arrest took place. A phone camera and a small digital camera were used and the pictures were sent to the appropriate agency via email on 13:45 after a failed attempt on 13:30. The extent of the bruises on the suspects’ faces is truly appalling and inevitably a series of questions arises. 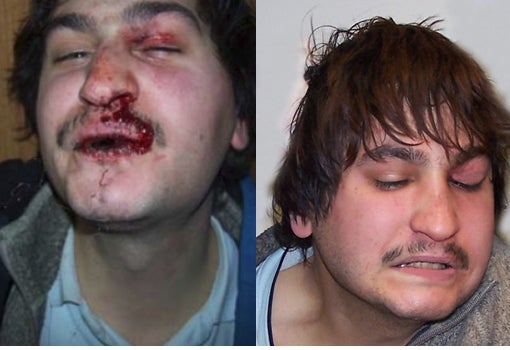 While the police claims that these pictures were taken immediately after the incident (which they place at 12:50) and also that they attempted to first send them to the appropriate agency at 13:30 and 13:45, the EXIF data (pdf) they themselves provided show that some pictures were not taken until 14:31. Furthermore, to add to the confusion, in the background of one of the pictures a clock showing 08:25 can be clearly seen. As if this is not enough, the metadata of the files shows that the files weren’t created on that specific computer until 13:53, which again doesn’t support their claims. But the metadata and EXIF data were provided in such a manner (PDF file) that they could have been altered with a simple word processor. This is not to say it was actually altered, but rather to point out that it’s a mess and can’t be used to prove anything, just complicates the case even further.

Internal Affairs, after examining the reports, concluded that there was no torture nonetheless. It claims eyewitnesses to the struggle and officers that testified they saw the bruising as the arrestees were brought in and even claims a police officer was injured, a detail we only heard about yesterday, a week after the incident, not supported by a coroner’s report. But the testimony of one of the arresting officers offers much ground for doubt, as he makes no mention of the intense hand-to-hand fight the others describe but rather, a swift and clean arrest:

We’d realised during the pursuit that the driver was unarmed. On the contrary the other guy was holding a Kalashnikov. We didn’t know how many there were in the back of the van. When we blocked them and they were left with no escape route, I approached the passengers door, opened it as fast  as I could, grabbed the armed man, threw him on the street and we started wrestling.

Within seconds, I saw the back door sliding open and someone pointing a gun at me. Before he had the time to shoot at me, or his comrade as we were fighting, one of my colleagues hit his hand and disarmed him. That’s where it all ended and they didn’t make a move to escape.

So can anyone really rely on the police to investigate itself? Especially in cases like this one, the Greek police is infamous for its tendency to cover up incidents or stall cases to the point of scandal. For the period 2005-09, 281 cases of police brutality were investigated. From those, only thirteen reached any conclusion. And no one is yet ready to forget how this specific agency (North Greece Internal Affairs charter) handled the case of the severe beating of Augoustinos Dimitriou, a Cypriot student, by 8 police officers in Thessaloniki in 2006, before a video that proved his abuse was published. Then, as now, ministers and police officials had gone on record saying they saw no signs of police brutality but “sheer professionalism” and blamed a flower pot for his injuries.

The situation with Internal Affairs is so bad that a new agency had to be founded. The new division for dealing with police arbitration therefore came into being, unfortunately only on paper, as the agency is still inactive. Even if activated, it will still be under police management, and not an independent body that would secure some impartiality. This comes after a number of convictions in European courts and officials from Amnesty International publicly condemning the police for co-operating with the neo-Nazi party Golden Dawn.

Before engaging in this panicked crisis management drill, the Greek Police and the Ministry of Citizen Protection ought to consider if these conflicting storylines and timestamps offer anything in the way of truth. By releasing these pictures without a coroner’s report that confirms their claims, they only offer more ground for doubt. And while trying to simply prove the suspects were not harmed after the arrest, the use of excessive force during the arrest is left wide open as a possibility.

For better or for worse, this has been a disastrous case for the police. Photoshopped pictures, half-baked excuses, lack of medical data and muddled information do not constitute the work of a serious and transparent police force. A government that backs them up nonetheless, while lacking evidence itself, appears as reckless and deaf to the reality of the problem. It is well established by now that torture and excessive force is utilised by the Greek police in the street, in holding cells and in prisons. By choosing not to deal with this, the Greek government renders its citizens hostages to the whims of a police force that is now a threat to social cohesion.