Soubry explained how she “can almost now tell somebody’s background by their weight” when she walks around her constituency. She expressed surprise at the fact “there are houses where they don’t any longer have dining tables. They will sit in front of the telly and eat.” She spoke of her horror at seeing parents buying their children fast food and concluded that poor people should be more disciplined about teaching their children proper table manners.

The springboard for this tirade was a set of government figures which “showed that 24.3 per cent of the most deprived 11 year-olds in England were obese, compared with just 13.7 per cent of children from the wealthiest homes”. A highly selective sample – with no definition about what “most deprived” or “wealthiest homes” might include, looking at children of a very specific age.

In an unusual move, I shall try to intrude in this debate with – gasp! – some facts. An analysis of the most recent and most comprehensive set of figures, collated by the Department of Health, concludes that there is no obvious relationship between obesity and income. The groups with the lowest levels of obesity are poor men and rich women. 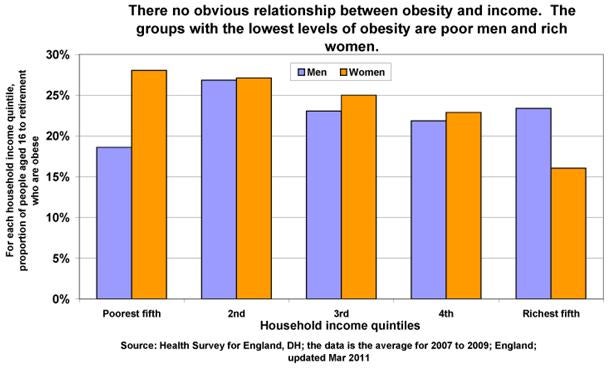 The dataset also strongly suggests that there is no obvious relationship between obesity and social class. 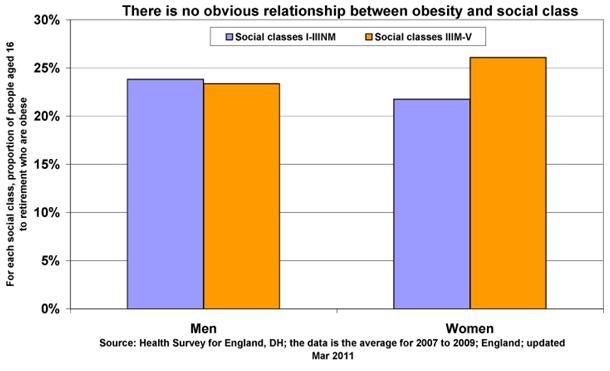 Now there is some evidence to suggest that there is a problem, specifically with children, looking at the same data. Currently 6.9 per cent of boys and 7.4 per cent of girls are obese – with the difference between the lower and higher classes 0.6 per cent and 1.5 per cent respectively for boys and girls.

However, there is a chasm as wide as the Grand Canyon between a study showing that a variation of values between 0.6 per cent and 1.5 per cent is beginning to emerge in children and the Minister for Public Health saying she can tell poor people’s background just by looking at them because they’re fat. And then going on to criticise them for not having dining tables – gosh, these people are animals!

It is not so long ago, I had to subsist on a bag of frozen fish fingers (40 for £2), two loaves of value bread (42p) and a bottle of cheap ketchup (31p) for twelve days. I remember it well. I remember the panic of running out towards the end and beginning to make my daily sandwich with three – not four – fish fingers, to make them stretch. So, when some affluent minister in a position of power, sits on her perfect Laura Ashley clad arse, in her perfect Laura Ashley dining room (paid for by our taxes), in her pink Laura Ashley life, and criticises me for not giving that splendid, nutritious meal the ceremony it deserves with a candlelit setting, I get very, very, very annoyed.

Soubry’s target is what she sees as bad parenthood and misinformed choices by poor people. Her comments about dining tables ignore the rising trend of limited affordable housing, with limited space in it, especially in urban areas. Her insufferable arrogance of condemning a parent buying their kid a MacDonalds, goes directly to her prejudice. Was it a rare treat? Was it a regular thing? Did she stalk this parent for a month to observe the family’s nutritional habits? Do you, when you make similar judgements?

The subtext of her solution – the only thing to do is speak to manufacturers – is steeped in the presumption that “these people are too thick to do the right thing, so we have to tackle it at the source”.

Her understanding of the issues is derived from years of a sustained tabloid campaign to portray poor people as idle, fat, lazy, stupid, ignorant slobs, responsible for their own demise. And, possibly, a DVD box-set of The Royle Family. Once the premise is established in one’s mind, of course, it is very easy to walk around a poor area and identify examples which confirm it. But that doesn’t make it evidence and the policies which result from it are not evidence-based. They are prejudice-based.

For every poor fat woman she sees (and judges) on a high-street, there are two of regular weight, an undernourished person in the queue at the job center, an emaciated pensioner who has to chose between heat and food, and plenty of incredibly fit people who clean others’ houses and build others’ conservatories. Anna Soubry just notices them less. Perhaps she wants to. The evidence and statistics actually do not support her position. She is just airing her own anecdotes.

Critically, she does so, while her government dispenses with school dinners and closes health centres, public libraries and local swimming pools. Those are the real, the shocking facts, Ms Soubry.

There is conclusive evidence linking poverty to poor nutrition, which brings terrible health problems and a reduced life expectancy. So, in fact, the only way for Anna Soubry to effectively poor-people-spot would be to observe someone for a very long time and see if, having suffered insult and condescension by her miserable government at every turn, having had their public services pulled from under their feet and privatised, they then die relatively young of some horribly painful ailment.

Let’s sort out the underlying problems, instead of further victimising their victims. Let’s not become judgmental, twitchy-curtain neighbours, like Ms Soubry, and call it anything other than pure cruelty.

I watched Anna Soubry’s appearance on the BBC’s Question Time yesterday evening. Her unwillingness to admit that her comments were wrong could only be characterised as wilful; her aggressiveness towards anyone who suggests otherwise as defensive.

Obesity has dozens of factors which are well established contributors. There is a statistically significant link, between race and obesity (for example, see figures 6 and 7 in this study). Applying Ms Soubry’s logic, it would be acceptable to say that almost all Black Caribbean people are fat. There is a statistically significant link between people with sedentary jobs and obesity (for example, see this report). Does this mean Ms Soubry can spot almost all office workers at the beach? There is evidence that working long hours and overtime may increase the risk of obesity (from a study conducted on nursing staff). Does it follow that Ian Duncan Smith can spot strivers by looking at their butts?

It is incontrovertible that deprivation is linked to malnutrition with all the health problems that may bring. One of them is being overweight. Another is being underweight. Another is having skin problems from vitamin deficiencies. Applying Ms Soubry’s logic, poor people must almost all be fat AND thin AND spotty. Also, almost nobody who is not poor is fat or thin or spotty.

I admire her motivation to tackle the food industry. The fact that she does not see the flaw in the logic of her damaging Daily Mail rhetoric, however, is deeply worrying.