Charleen is talking to me by phone, and I can hear her three kids screaming in the background. She’s been working from 7am at home because she can’t afford the childcare to go into the office. The rent is due on Monday, and she’s running out of options. The TV and kids’ computer games have already gone to the pawnbrokers and her private landlord doesn’t give a damn. She already owes £2,000 to pay day lenders. Now she’s choosing between eating and heating.

“You can’t win, no matter how you look,” she says, “I’m getting all sorts of panic attacks, I’m stressing about keeping a roof over me and my children’s heads… A lot of people feel the same. You can’t afford to rent privately, pay the bills and eat.”

Millions of people around the UK are now finding themselves in the same position. As the credit card bills for Christmas thud through the letterbox, January 14 has been labelled “debt day”.

Those suffering are no longer just in the lowest income groups. They are not irresponsible spenders and they often work overtime. Charleen works as an accountant. She manages a company’s finances, but she can’t make the books balance at home. The cost of living is rising like a tide, and when wages don’t keep up, even middle-income earners struggle to stay afloat. The household buget on the back of an envelope goes in the bin. We borrow to plug the gap.

“People ask me why I’m lending from these places (pay day lenders) when there’s so much to pay back, but I have no choice. I just have to pay my rent. I’m Robbing Peter and Paul to pay Mike. I’ll try and catch up but everyone just wants their money.”

“To be honest it’s crossing into the family home – I’ve got arguments with the other half and I’m shouting at the kids constantly. I try not to burden the kids. I don’t want them to have a bad life . . . They ask why I’m not eating and I just say I’m not hungry, or I ate a bite whilst I was cooking. This is just the stuff you say.”

This government talks a lot about cutting state debt. But the figure it talks less about is personal debt held by individuals on loans and credit cards. According to Credit Action, that figure now stands at a whopping £1.4 trillion – and it’s growing.

In a twisted irony, experts say that some of the government’s desperate attempts to cut state debt may actually increase personal debt. When the benefit cap kicks in, Charleen says she will be borrowing more to plug the gap. Parents will go to pay day lenders to compensate for housing benefit changes. Students are already borrowing more for higher tuition fees to cover education cuts. Without doing more to help people, reductions in the state debt are being met by an increase in personal debt as Britons try to compensate.

Anna Hall knows all about this. She works as a money advice manager at Citizens Advice, a charity that registered 2.1 million debt problems last year alone. In the wake of the Christmas holidays, she knows that all advisers will be on call as the telephones ring off the hook. She says this year, it’s only predicted to increase.

“At the moment most of our calls are about benefit changes, but we’re expecting a knock-on effect as people take on more debt just to get through it. We’re all expecting it to get much worse. Meanwhile one of the cuts to hit local authorities is Citizens Advice services so we can’t even provide all the advice we want. It’s a perfect storm really.”

Hall says it’s hard to stereotype the people who are asking for help. In the last round of figures, 61 per cent of Citizens Advice callers were in some form of work. Most survive on the edge with low wages and high costs, so a sudden change can quickly push them under. A relationship breakdown. A dentist bill. A fridge malfunction. A funeral. With no financial space to meet these surprises, the debt spiral starts.

But Hall says it’s not just borrowers that are changing. It’s also the lenders.

“Before the crash it was easy to access to cheap credit,” says Hall, “Now people are turning to pay day loan companies and credit cards for rent, food and clothes – the really basic stuff. That’s the big shift. Benefits are already incredibly tight, including for those in work, and it’s harder to make ends meet.”

Walk down your local high street and you’ll see evidence of this growing borrowing culture just about anywhere in the UK. Wonga. Peaches. The Money Shop. In London the adverts are plastered on red buses. “Money in minutes!” scream local billboards. Money in seconds is available on phone apps from your bedroom. By the age of ten, a third of children have used their parent’s credit card to make an online purchase. We are a nation of borrowers and lenders. We don’t produce goods, we shuffle credit.

To put this problem in perspective, look at the graph (below) produced by Morgan Stanley. We can see that the UK is the most indebted country in the developed world – we are deeper in the red than Japan, the USA and Europe. But only a tiny fraction of our total debt is held by government. Most is held by the financial sector, but a good chunk of it is also held by households. In fact, the level of household debt in this country is actually greater than government debt. 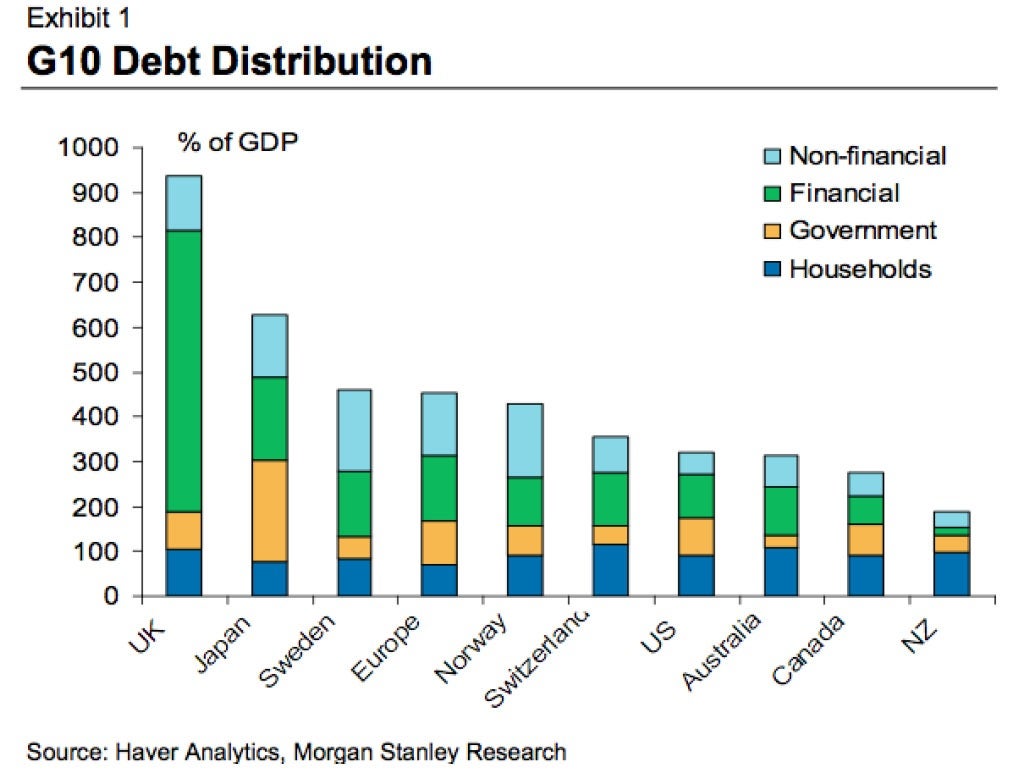 The bulk of this household debt is not from credit cards or payday loan companies, but mortgages. But owning your own home doesn’t mean you’re secure. Take Christine, who works as a 999 call operator in Oxfordshire. She was just two years away from paying off her mortgage and taking several holidays a year until her husband walked out on her. Then everything changed. Making mortgage repayments and household bills with just one earner was impossible, and she racked up some £6,000 worth of debt on credit cards just buying basics and working overtime.

“Yes there are people who spend irresponsibly,” she says, “People say they have to have things but they don’t really. People say they have to buy their kids certain Christmas presents, but all they’ve got to do is say No. For me, it wasn’t like that. Everything was affordable until we broke up. It was an accidental debt.”

“Only now do I realise how little room there is to manoeuvre,” she goes on, “I’m over the moon if I get to the end of the month and have £20 in my account, but if something went wrong with the car or something then that would be it.”

But can’t she just move to a smaller place? Christine already moved out of her home to rent a £700 a month flat, and the only cheaper alternative she could find was full of cockroaches and still left her struggling. For others, moving often means leaving their job and family and friendship networks, not to mention uprooting their children’s education. For too many people, it doesn’t seem possible to work your way out.

“It breaks your heart sometimes”, says Christine, “I put in forty or fifty hours a week and what’s it for? Charity shops and egg on toast for tea. You can make a joke of it, but sometimes it wears a bit thin. It can happen to anyone at the toss of a coin.”

Given that the financial crisis was triggered by irresponsible lending, why doesn’t the government talk more about this? The answer from experts is worrying. When two thirds of the British economy is built on household spending, and when a large bulk of that spending is fuelled by debt, no one wants to pop the bubble. David Cameron found this out the hard way when he was forced to remove calls for Britons to pay off their credit card bills in his 2011 conference speech. He hadn’t clocked that this would plunge the economy into a much deeper recession.

“There is a bit of denialism about the role of debt in the recovery,” says James Plunkett, director of policy at the Resolution Foundation, “there is only just starting to be a realisation that this needs to be looked at.”

In fact, Plunkett argues, one of the biggest problems with the government’s recovery plan is that people aren’t borrowing enough:

“Early projections from the Office of Budget Responsibility assumed that households would borrow more than they have to compensate for declining real wages. The fact that they haven’t is one of the key reasons why growth isn’t going as well as we thought.”

In other words, the government was hoping for a more debt-fuelled recovery than the British people have given them.

But the fact that Britons, on average, are paying off more than we predicted, does not mean that debt isn’t a growing problem. Looking at averages hides the fact that there’s a long tail of people who are getting into deeper trouble. Some 3.6 million people in the UK are now “debt loaded” which means they spend more than a quarter of their income on debt repayments, and middle income earners are starting to be effected.

The scale of the problem was brought home to me last week when I was talking about this article with friend in a pub. Sitting opposite me with neat blonde hair and getting ready to leave early for work the next day as a middle manager, this highly educated and hard working woman told me she’d been forced to take out pay day loans several times last year to cover basic living costs. She’d not told anyone before then. People we don’t expect are struggling. The middle is getting closer to the bottom.

So what is the way out? Financial education is part of it, but that doesn’t help when the cost of living is higher than wages. To make a real difference, we need to make work pay for the bottom half. The Resolution Foundation has put forward proposals for a £2bn childcare programme for example, which Plunkett argues could be funded in part by cutting universal pension credits:

“Part of the problem is that work related costs like childcare and transport have gone up. That’s why childcare is so important, and the living wage. For many families it doesn’t make sense for the second parent to go out to work because it doesn’t cover the cost of childcare.”

None of this is easy. The last government also failed to do enough. But for many outside Westminster the wake up call has already started. Charleen still hasn’t paid the rent. She’s on sleeping pills, and the anxiety is running high. The last financial crisis was built on private lending to insecure individuals. We can’t afford the human or financial cost of repeating that mistake. We need to talk again about debt, and this time it’s personal.