In case anyone missed the news that David Cameron was pleased to see his buddy Barack Obama re-elected, Downing Street released a photo of the Prime Minister chatting with the newly re-mandated Commander-in-Chief: 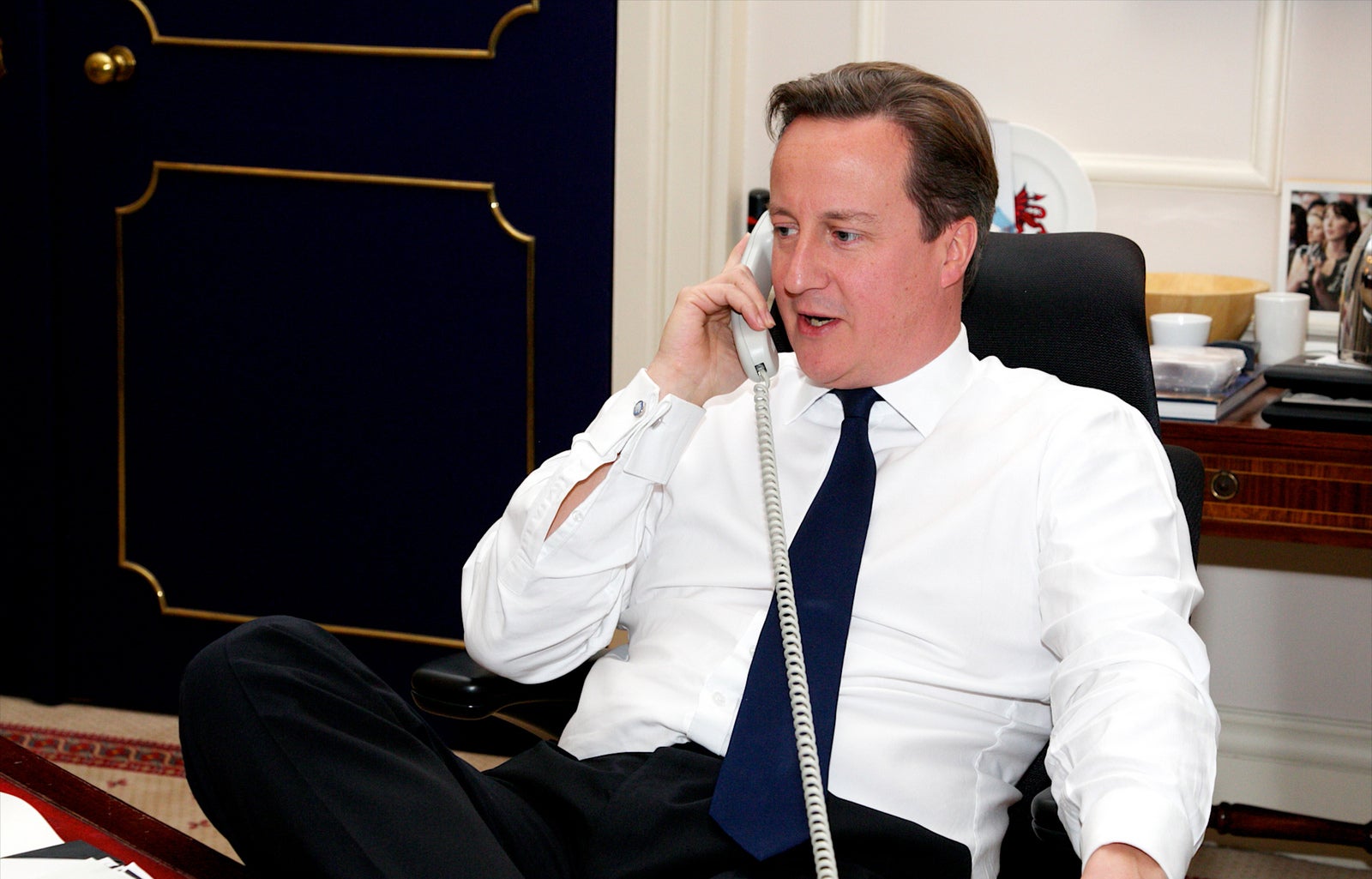 (It’s a phone call, so you can only see Cameron and have to imagine Obama smiling affectionately at the thought of the future summits he’ll spend in the company of his most essential strategic partner.)

The significance of the US election to the Cameron project has been heavily analysed and spun. (There are interesting pieces on the subject here, here and here. I also touch on it in this week’s column here.)

In brief, the good news angle for the Tories is that an account of Obama’s victory - incumbent overseeing tricky economic repair job wins second term to complete task - rehearses the campaign Cameron wants to run in 2015. The bad news angle is that Romney was ahead in opinion polls on measures of economic confidence but way behind in responses to the kind of ”understands people like me” proposition that Cameron also struggles with.

Plus, the Republican image as overly concerned with the interests of rich white rich men is a hindrance that has certain resonance for the Tories. (Although that can be sold as good for Cameron, since it empowers him to slap his own right wing down a bit.)

In reality, the US election simply isn’t that important to British politics. We obsess about it because American democracy is fascinating, it’s a powerful country that matters to the rest of the world and the players have the courtesy to speak our language so it is accessible as spectator sport.

One of the interesting things to observe in the UK aftermath of the poll is not the result itself but the licence it appears to have given top Tories to be visibly optimistic. The positive interpretation of Obama’s win outlined above requires all sorts of caveats, not least the fact that Cameron might yet have to fight an election with an economy that has made people feel poorer, in which case a let-me-finish-the-job proposition rings pretty hollow. Yet the Conservative high command clearly feels it has turned some kind of corner.

That is certainly the impression I get from loyal MPs and ministers who, while wary of celebrating the emergence of green shoots, are ready to sound cautiously upbeat about both the economy and their prospects for victory in 2015. One factor informing that view is the feeling that Ed Miliband hasnt capitalised on his relatively successful annual conference. They see no sign of momentum or surge of project-building energy - no radiation of collective charisma - from the Miliband camp.

Tories fully expect to lose next Thursday’s Corby by-election, but even that doesn’t seem to be getting them down. That is because they see most of their current woes as symptoms of a generic mid-term malaise and not necessarily irreversible structural weakness.

Andrew Cooper, the Downing Street pollster, has a presentation that he gives to cheer MPs and party staffers up on this subject. It involves looking at long term trends in incumbent/opposition relations over time, with special attention paid to periods when the Tories are in power.

What tends to happen is that the party in office loses popularity, takes a real opinion poll pasting in the middle of the parliament, then recovers in the run-up to an election until it is within reach of victory. According to this analysis, the Tories are better off now than they were in the mid-80s. To make this model work you have to discount the period 1997-2005, when the Conservatives were behind in the polls almost constantly. That is explained away by claiming that Blair was a unique candidate, barely Labour at all in many traditional respects and the Tories were in a particularly dark place.

In other words, it was an anomalous time, whereas now normal cyclical service is resumed. The Conservatives are in power facing an untrusted and not entirely plausible Labour opposition. They are a bit behind but who would expect anything else, especially given the economic circumstances. Arguably, they are nowhere near as far behind as they ought to be and there is plenty of time and capacity to bounce back. So, the pep talk goes, this is the bottom for the Tories and it isnt all that low down.

Privately some senior Labour folk agree. One party strategist commented to me recently that the Tories won’t be losing much sleep over their poll ratings at the moment.

Of course, this could all be wildly hubristic on Downing Street’s side. There are plenty of public sector cuts yet to kick in which could suck demand out of the economy and produce gruesome social effects that reinforce the nasty party image. International economic turbulence is never far away. European divisions remain ruinous to the party’s image as an effective force in government. The Tories well documented problems winning votes in the North and Scotland and among non-white communities havent gone away.

But Downing Street’s hope is surely that a bit of confidence in the prospects for 2015 will promote discipline in the ranks and a virtuous cycle of unity and an aura of governing competence. (There is a solid core of MPs who remain implacably, viscerally hostile to Cameron but the appetite for harmony in the rest of the party is quite strong and impatience with the wreckers is growing.)

A steady spell of non-chaotic, half-way dynamic administration, coupled with positive GDP and unemployment indicators could see the situation quickly looking rosier for the Tories. More important, it would look bleaker for Labour, provoking another round of doubts in Miliband’s capacity to animate an election-winning project and an explosion of disunity in the opposition ranks.

I don’t say this is what will happen, just that it is a scenario the Tories think plausible and that allows them to feel upbeat enough to look at events across the Atlantic and put a quite fancifully positive spin on them. They may not know how to win, but they don’t yet feel as if they are losing.