Feeling sorry for Nadine Dorries is not going to be popular view, but I suspect the next week is going to showcase some not very attractive facets of the mob mentality that sometimes arises around these reality TV shows. Almost 10 years ago, Channel 4 had to get in extra security when Adele left Big Brother. Why? Because people thought that she had been a bit two-faced and there was such over-the-top hatred towards her, fuelled by the tabloid press.Then the same papers fuelled hatred towards Jade Goody by depicting her as a pig, starting off the rollercoaster that saw them make her, break her and finally raise her to virtual sainthood before her premature death from cancer in 2009.

I do watch I’m a Celebrity. It can be quite compelling. It actually changed my opinion of Liberal Democrat Brian Paddick. His series was a classic, though, with George Takei, Martina Navratilova and Esther Rantzen providing much amusement and quality banter. Brian was not in my good books because he’d criticised his 2008 London mayoral campaign team, led by my friend Andrew Reeves, in the press. He later learned his lesson, recognised that he had been a bit of a diva and went on to fight a very good campaign in the same role this year. However, in 2008, I have to admit, not to my credit, that a huge motivation for tuning in was to see him get covered in beasties and eat unmentionables.

Now, there comes a point, though, if a person is showing real distress, that enjoying their discomfort goes from being not very nice to inappropriate or even unacceptable. In the first week, viewers can choose who does the bush tucker trials, where a celebrity goes through an extremely unpleasant experience, usually involving bugs and beasties, to earn meals for everyone else. The viewers inevitably choose the people who are most scared. Last year it was Sinitta, or occasionally Antony Cotton. It’s been Jordan and Gillian McKeith in the past. If someone has had to have oxygen because they are so scared, then it would never occur to me to pick up the phone  to put them through it again. There comes a time when, however much they’re being paid, however self-inflicted it all is, putting them through actual suffering is not nice.

I think we can guess who’ll be voted to do all the trials this week. Nadine Dorries, the controversial Tory MP who’s abandoned her constituents so she can lecture us all about abortion from around the camp fire, has, in my view, no redeeming features. The one bad consequence of the Liberal Democrats voting against the boundary changes is that her constituency will remain in existence. She has therefore had a pretty major reward for her bad behaviour in voting against Lords reform.

In my view, Nadine should not have agreed to take part in this programme. For an MP to be out of the country and uncontactable for three weeks purely to take part in a TV show is not on. There are obviously times when MPs have to take  extended spells out of Westminster. They’re human beings and subject to the same crises in terms of illness or caring for sick relatives that we all go through and we’d take time off for. People have sympathy with that. They are less likely to understand an indulgent ego trip, done without consulting anyone, which will benefit nobody but Nadine. I’m sure she sees a future for herself as a Christine Hamilton type, rehabilitated by reality TV almost to national treasure status. Well, that worked so well for Lembit when he did it after losing his seat in 2010. And as Chief Whip Alistair Carmichael pointed out in his inimitable style this week: 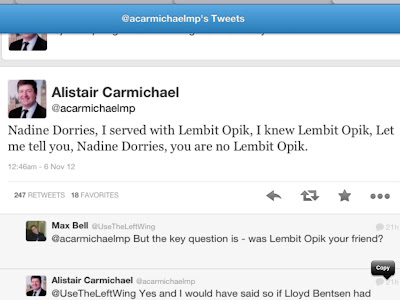 If Nadine struggles in the jungle, I won’t be wasting too much of my energy feeling sorry for her, but I don’t think it is to anyone’s credit if they take pleasure in actual suffering of another human being, no matter how self indulgent, self inflicted or insignificant in the scheme of things it is.

I am maybe being a bit soft here – but then I can’t imagine that, had I lived in an earlier time, that I’d have had much truck with throwing things at people who’d been put in the stocks. These reality shows can sometimes be the modern day equivalent.