It was odd discussion, to say the least.

First, we heard that Wolf had previously argued that Julian Assange’s accusers should be denied anonymity. In the very next sentence, however, Jeremy Paxman’s voiceover segued into asking “Are there times when No doesn’t really mean No?” (I can’t see the link myself.)

At 2.30 minutes in, Paxman interviewed Wolf. She said:

I’m not saying that those women should be – quote unquote – unmasked. I’m saying that it serves rapists to have rape cases prosecuted under the cover of anonymity altogether, because it gives impunity to prosecutors.

Paxman points out that the law was changed here to give anonymity.

It had wonderful motivations, but the upshot here is that in Britain, only 6 per cent of reported rapes, which is a small fraction of all rapes, get convicted. . . I do think, like many feminists, that rape shouldn’t be stigmatised unlike any other kind of assault. . . It stigmatises women, and it allows impunity.

… The reason I know there’s something very corrupt about the prosecution of the Assange case – I’m not talking about the women right now, we just don’t know enough – is that it is so profoundly different from… the way rape is prosecuted for any other victim in Sweden.

This is all very odd. Wolf has consistently expressed the opinion that because other rape complainants are poorly treated, these ones should be too.

She went on to explain that what is alleged in the Assange case was generally dismissed by Swedish police and prosecutors, because the women “weren’t innocent enough”.

Hmm. Could this be the same woman who wrote this Huffington Post piece? 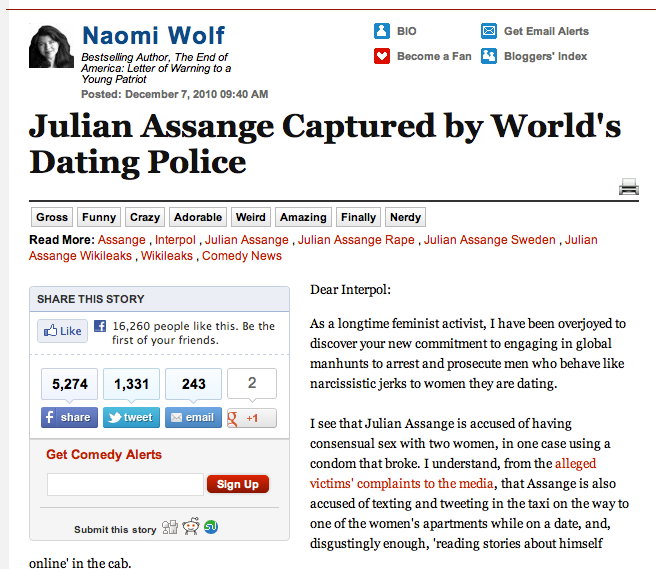 In that piece, Wolf does EXACTLY what she suggests the Swedish prosecutors have done to others – she dismisses the allegations because there was a previous relationship between Assange and his accusers.

(There’s a rare example of an incorrect correction at the bottom of that piece, too:)

Update and correction: The Guardian has, since I wrote this original post based on the Daily Mail, reported that the two women’s complaints to Swedish police centered on the alleged misuse of or failure to use condoms, which can be illegal in Sweden.

I’ll leave you to enjoy the rest of the interview, in which Wolf talks about the “brain-vagina connection”, by yourselves.