While Cosmopolitan has always claimed feminist leanings, we know that really it’s always been about attracting the male of the species. Cosmo launched in 1972, and has been peddling the same strange mix of empowerment and insecurity ever since.

Although we doubt the magazine nowadays would include the word ‘anachronistic’ (Quentin Crisp, September 1981) or feature a sanitary towel ad that advises you to ‘hustle through your period’, the core aim of keeping and catching that man has always been a constant. Here, we take a look into the archives and make some cheap jokes about magazine content that was produced before we were even born.

1. Be a Cosmopolitan Girl 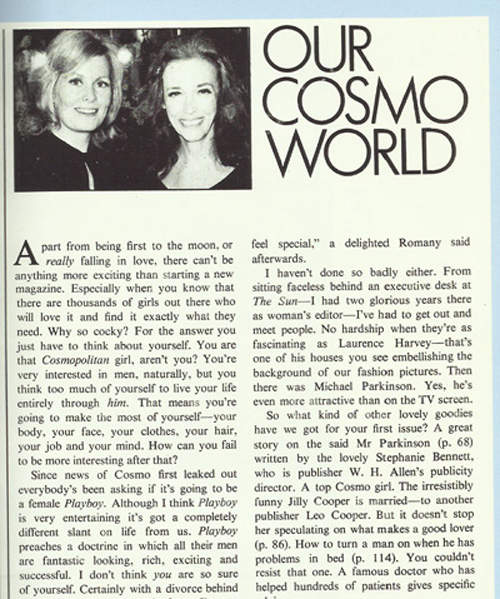 Ok, so you’re not obsessed with men, but that doesn’t mean that you don’t need to spend vast amounts of time and money to make yourself more interesting to them, while retaining the requisite amounts of insecurity (unlike those swanky Playboy guys) to keep you buying Cosmo every month.

2. Exercise in the Office 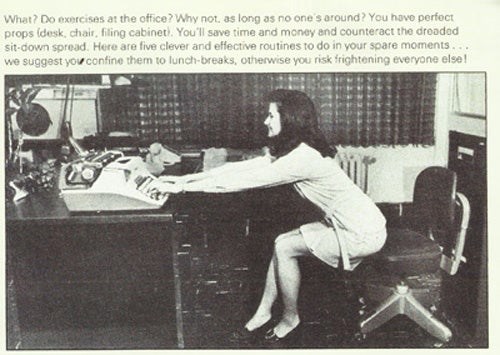 Take off your bra, ride your desk chair (ooh er!) and not only will you stay skinny, but if your boss catches you in the act, you could be in for a very sexy appraisal. Call us cynical, but this whole feature seems to be geared towards getting your boss to bang you.

3. Be the Perfect Wife

That means being able to eat and eat and still look sensational, btw. And being a first-class cook. And, according to Max (not pictured), possessing ‘a human quality of aliveness’ (we think that means y’know, breathing) 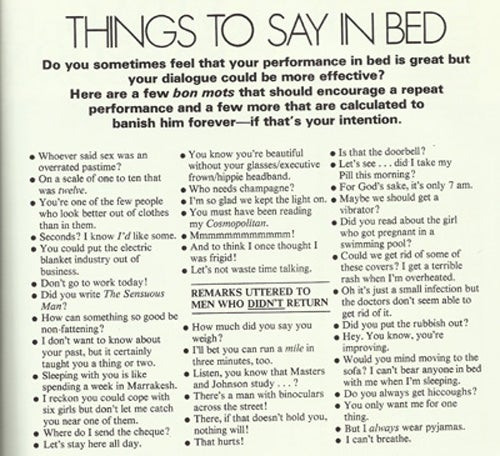 Lines include ‘Sleeping with you is like spending a week in Marrakesh’ (sweaty and expensive), ‘Where do I sent the cheque?’ (We think this means that the guy is so good at sex that he could be a gigolo, but tbh we’re really not sure) and ‘to think I once thought I was frigid.’ Yeah. 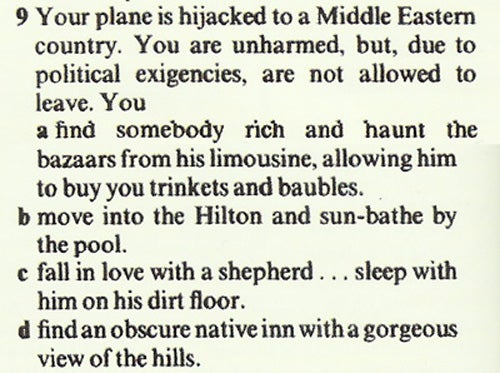 A Cosmo quiz from January 1973 entitled ‘How Sensual Are You?’ includes the above hypothetical scenario, demonstrating how even the most life endangering of circumstances can provide pulling opportunities.

6. Do Some Naked Dancercise (but only if you’re sexy) 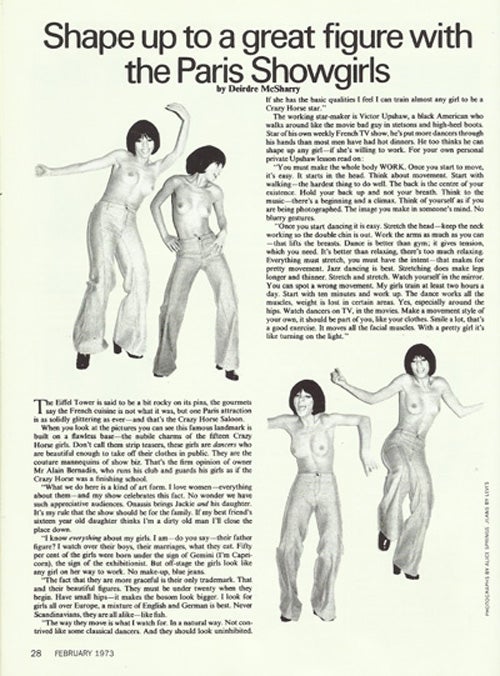 Flares optional. In the words of Cosmo, ‘don’t call them strip teasers, these girls are dancers who are beautiful enough to take their clothes off in public.’ Oh, what’s that? We’ll put our shirts back on, then.

7. Buy him a Dachshund 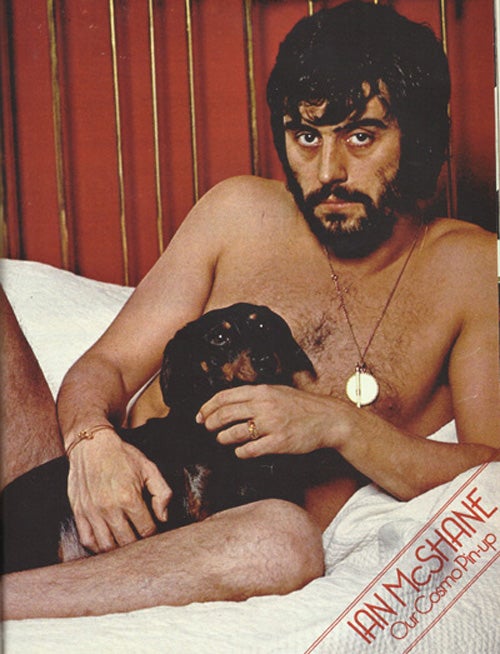 He’ll be so happy that he’ll take his clothes off and straddle it. 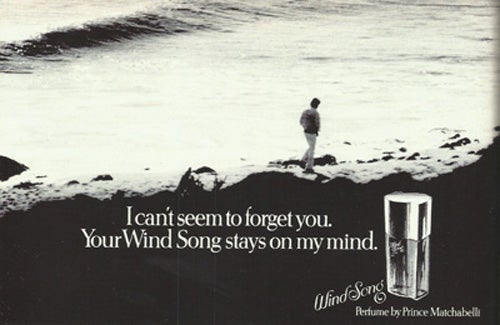 Not an unpleasant symptom of undiagnosed IBS, it turns out, but an expensive perfume with a most unfortunate name.

9. Tape your hair to your head… 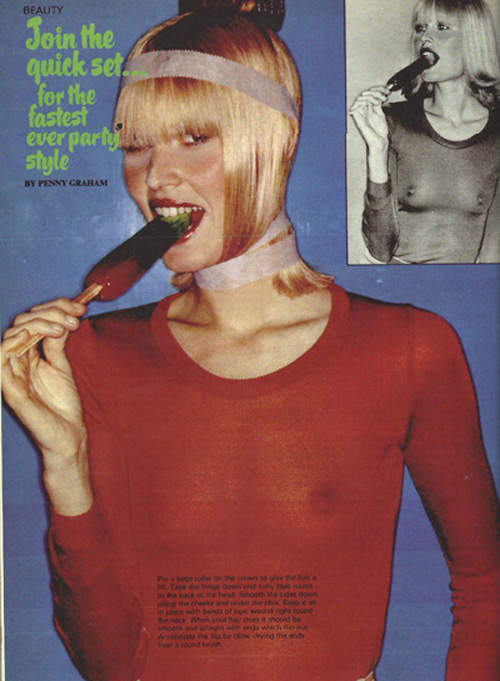 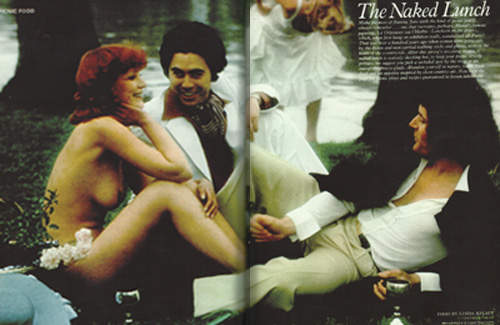 No caption really needed. ‘Pick a secluded spot,’ advises Cosmo. Otherwise the flares and perm combos sported by your gentlemen companions may lead to arrest under the Sexual Offences Act. 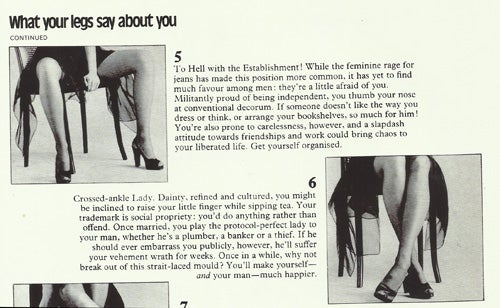 Being a feminist is, admittedly, a rather sedentary endeavour (we’re sitting down now, FYI) 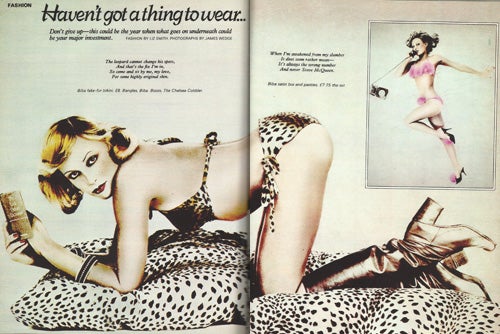 Go on, it’s only a little one. Plus, as we all know men value women for their minds. He can’t even see the furry lingerie and seductive posture: he’s too busy thinking about your massive vocabulary. 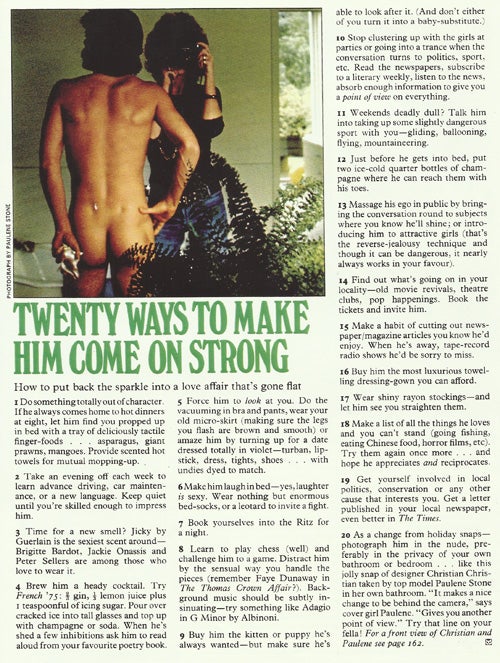 14. Get Thin Enough for a Thong

Now you know whom to blame for that decade-long wedgie. 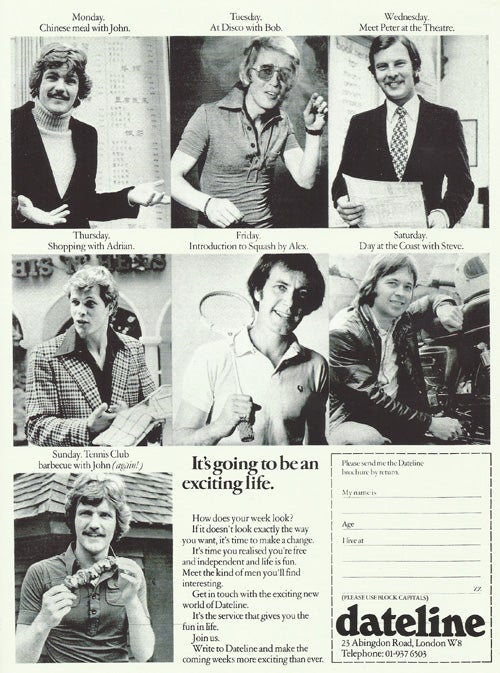 How come Craig David gets to make love by Wednesday (and for the rest of the week) when we have to meet Peter at the theatre and spend a day at the coast with Steve? It hardly seems fair. Bob looks like a hoot, though. Come to Mama.

16. Smock Around the Clock 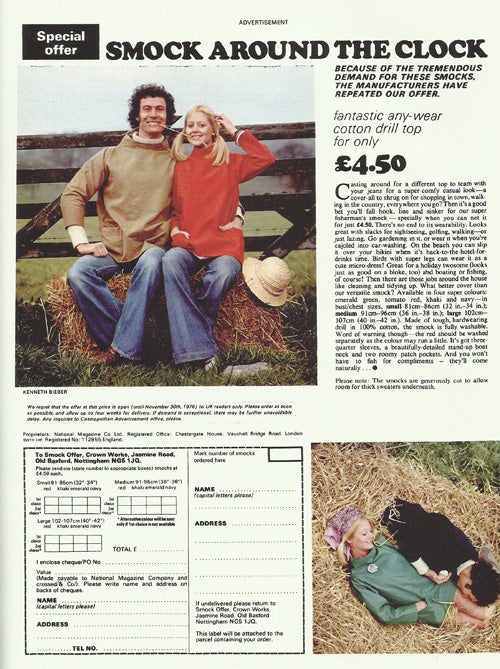 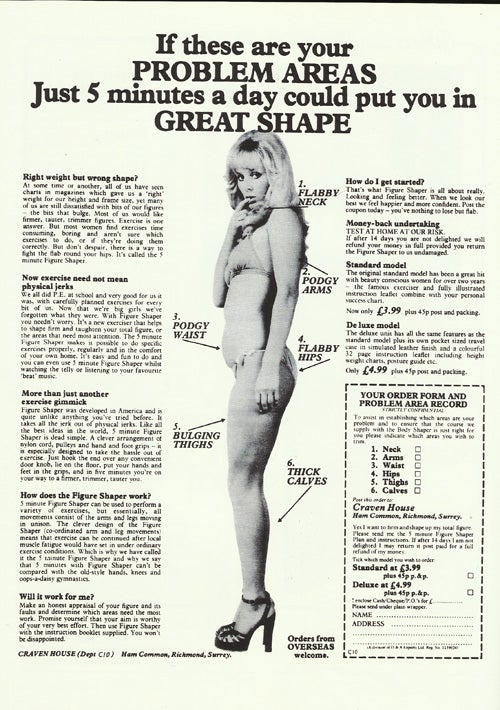 The print equivalent of America’s Next Top Model, where gorgeous looking women are bullied into a state of permanent self-loathing. Nice. 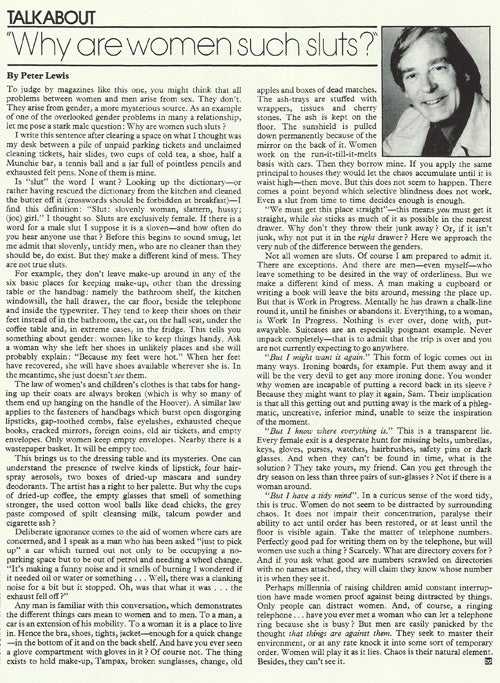 OK, so it doesn’t mean what we think it means, but Peter Lewis’ full page moan about how women are messy, slovenly and disorganised reeks of sexism, arbitrary gender norms, and, perhaps worst of all, observational humour (aren’t women silly) Shudder. 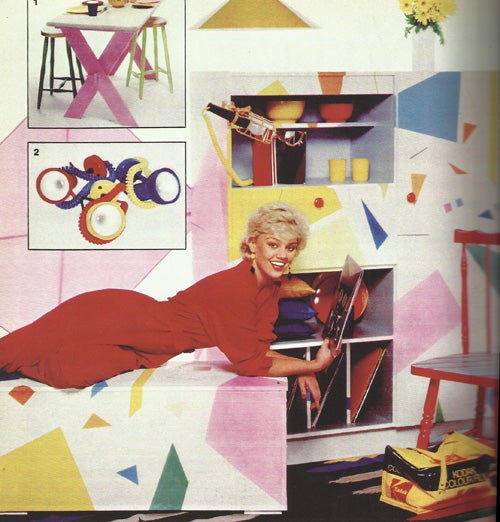 Where better to bring your beau back to than a living room that looks like it’s been vomited on by an eighties children’s television presenter with a penchant for millions sweets and then spunked on by a My Little Pony? 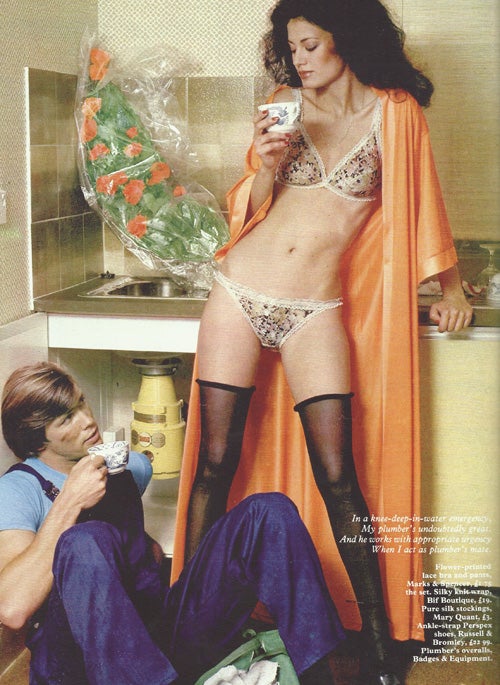 Oh this old thing? I always sport hold ups and an orange kimono while taking tea with tradesmen. 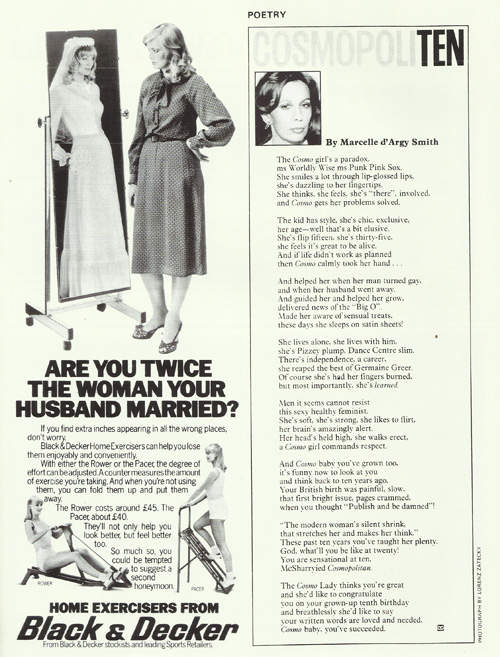 Genuinely disturbing, and perhaps even more so when you consider that the early eighties saw Cosmopolitan take a much more feminist slant. It’s sad that some genuinely groundbreaking journalism has been let down by ads such as this. Putting it alongside articles with titles such as ‘Sexist Chat to Avoid’ and features by Paula Yates about women’s lib just undermines the whole endeavour. This ad, worthy as it is of the 1950s, actually appeared in March of 1982. As for the poetry: we’ll let that speak for itself.

23. Don’t laugh at his failed erection 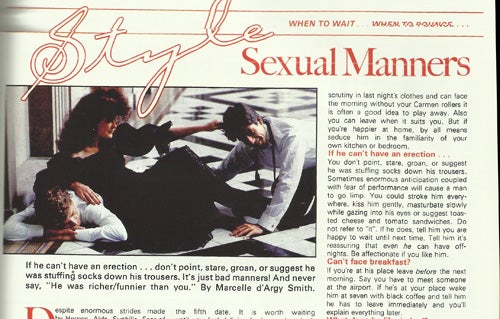 1 Way to Please a Woman:

Keep her away from an article called ‘The most beautiful thing a man can do for a woman’, from the 1972 launch issue of Cosmo. IT’S FOR HER OWN GOOD. It’s a three page feature about Michael Parkinson’s vasectomy, and now we can’t stop thinking about his nutsack. Thanks, Cosmo. 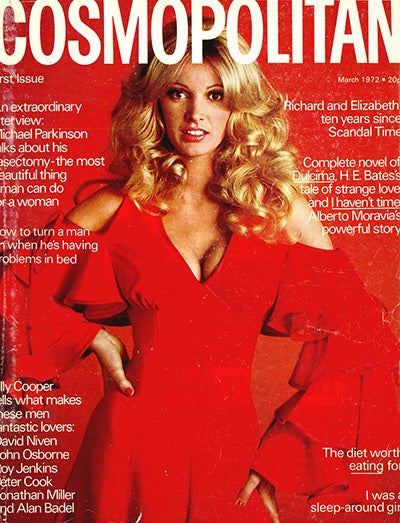