David House, close friend of alleged Wikileaks source Private Manning and one of the US Government’s key witnesses in the grand jury aimed at indicting people involved in the organisation, has launched a forthright attack on Julian Assange, the head of Wikileaks who is currently esconsed in the Ecuadorian embassy where he is seeking asylum.

House, who tweets as VoxVictoria, wrote the following (read from the bottom, as ever): 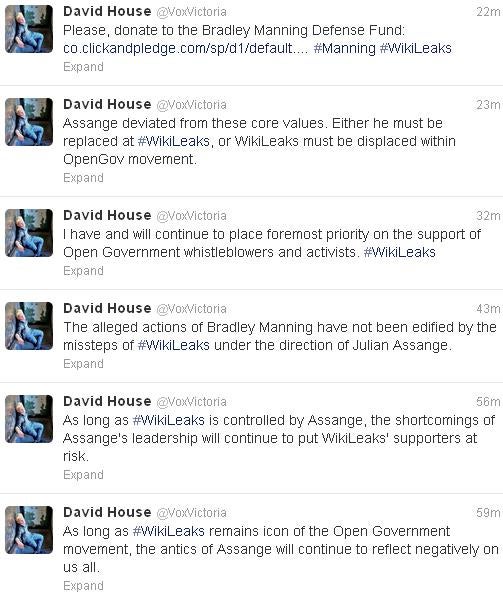 As long as #WikiLeaks remains icon of the Open Government movement, the antics of Assange will continue to reflect negatively on us all.

As long as #WikiLeaks is controlled by Assange, the shortcomings of Assange’s leadership will continue to put WikiLeaks’ supporters at risk.

The alleged actions of Bradley Manning have not been edified by the missteps of #WikiLeaks under the direction of Julian Assange.

I have and will continue to place foremost priority on the support of Open Government whistleblowers and activists. #WikiLeaks

Assange deviated from these core values. Either he must be replaced at #WikiLeaks, or WikiLeaks must be displaced within OpenGov movement.

With Assange slightly incommunicado in the embassy, it remains to be seen how this attack on his leadership will go down within Wikileaks and the wider movement.