Two fourteen-year-old children, separated by an ocean but united in the pages of the Daily Mail.

The other, an American girl named Kylie Jenner, is famous for being the younger half-sister of Kim Kardashian, a woman who achieved fame through the release of a sex tape in 2007. Kylie can be seen with her sister in the Mail “stripping off” to “pose in bikinis.” She is pictured “displaying her … trim figure for her two millions (sic) Twitter followers to ogle at.” 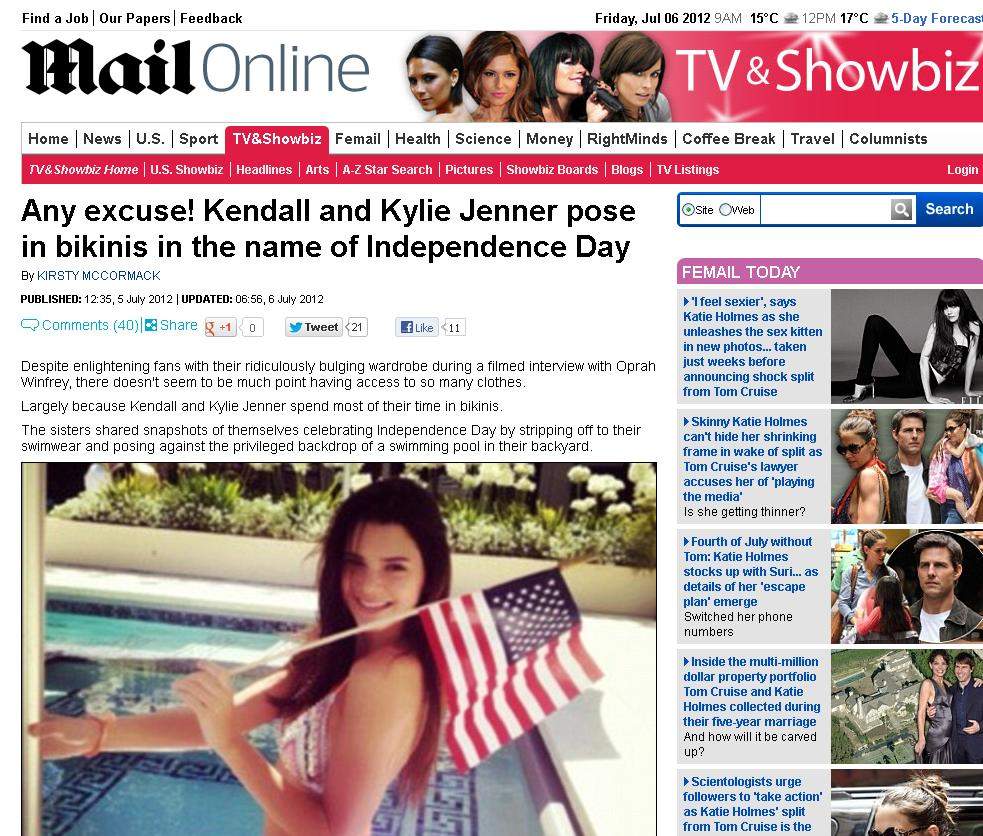 There are those who are concerned about the sexualisation of children, and there are those who think that it’s fine to print pictures of a 14-year-old girl posing in “skimpy bikinis” and “tiny wetsuits” to sell newspapers, but only an institution as morally bankrupt as the Mail could hold both views simultaneously. Only the sort of editor one can imagine stalking the newsroom with sparkling white semen stains decorating the crotch of his handmade trousers, sneering contemptuously at his own readership, sickened by the girls he pimps to them, his skin coated with a stickiness that no amount of scrubbing and showering can rinse away.

The Judge deserves some scrutiny though, as this isn’t the first time he’s come to national attention for unusual rulings. In 2011 he gave a suspended sentence to a 26-year-old man who had groomed a 14-year-old school girl for sex, ruling that he was “simply a young man who was unable to control his sexual urges.” His argument invoked the myth of the self-guiding penis; the idea that men are helpless ballistic spunk missiles, a careless whisper away from deploying their payload over some innocent bystander. It’s an idea usually espoused by men trying to excuse their crappy behaviour; people like Brendan O’Neill, whose penis forces him to wolf-whistle at passing girls, and writes many of his columns.

Judge Hawkesworth blamed impulses in this latest case too, sympathizing with a young boy who, according to the Mail, “later admitted he regularly looked at hardcore pornography on a laptop at home.” “I’m satisfied it was impulsive and I believe you have become sexualised by your exposure to and the corruption of pornography,” the judge is reported as saying: “Your exposure at such a young age has ended in tragedy. It was the fault of the world and society.” Not the parents, nor the school, nor even the town – nothing so crudely specific.

The phrase, “sexualised by your exposure to and the corruption of pornography,” is syntactically dubious and semantically void. ‘Sexualisation’ is one of those terms like ‘big society’ that has become synonymous with “something I can’t adequately describe.” It is a mythical mental health issue invented by campaigners who feel that it’s ‘common sense’ that children are be damaged by sexually explicit material, but who are unable to define either the damage or the causes beyond terms that are so vague as to be meaningless.  In effect the judge seems to have invoked a new mental health condition for the purposes of giving the child a lighter sentence.

“The case has fuelled demands for stricter controls to be put in place to stop children accessing online porn,” according to the Mail, who cite no examples. They fell foul of a PCC complaint by some bloke recently, and ended up removing an article that falsely inflated public support for an automatic internet filter. Still, their editorial line – one of them at least – has strong support from powerful politicians; people like the rising Conservative star Claire Perry, an MP who campaigns on her opposition to the sexualisation of children. I asked Perry on Twitter what she thought of the Mail’s regular bikini shots of Kylie Jenner. She didn’t reply.