Where were you when you first heard about Nicki Minaj’s cousin’s friend’s testicles? Specifically, what allegedly happened to them after he was vaccinated for Covid-19?

“My cousin in Trinidad won’t get the vaccine cuz his friend got it & became impotent. His testicles became swollen,” the rapper tweeted on 13 September. “His friend was weeks away from getting married, now the girl called off the wedding. So just pray on it & make sure you’re comfortable with ur decision, not bullied.”

You may not remember where you were when you first saw it, but the chief medical officer Chris Whitty probably does. He was asked to comment on the tweet in a press conference the following day, in relation to general vaccine hesitancy (at the time, case numbers in the UK were roughly 30,000 a day and vaccine uptake was plateauing). 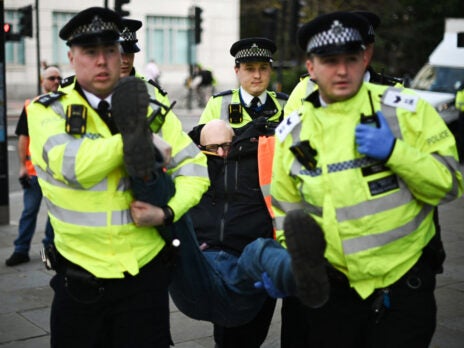 Peaceful protest is under threat from the new UK Policing Bill

He added that there are “people that go around trying to discourage other people from taking a vaccine, which could be life-saving or prevent them from having life-changing injuries” and “many of those people I regret to say will know they are pedalling untruths but they still do it. In my view, they should be ashamed.”

This would have been enough to grab the public’s attention. Whitty beefing Minaj over a tweet that was already ridiculous on its own? You couldn’t make it up.

But what came next was even more mindboggling: Minaj began tweeting about Whitty’s remarks, quote-tweeting a video of the press conference with heart eyes emojis.

Then, she posted a voice note of herself putting on an English accent, asking it to be sent to Boris Johnson. When the BBC political editor Laura Kuenssberg shared Minaj’s tweets, commenting “2021 everyone”, Minaj quoted-tweeted Kuenssberg back to her 23 million followers calling her “a jackass” and telling her to “go away dumbo”.

While for many, this 24-hour circus was simply a welcome distraction and a way to lighten up increasingly grim press briefings, for others, the Nicki v Whitty feud also emphasised one challenging element of the pandemic. Minaj’s post – though objectively very funny – is indicative of a major problem: vaccine hesitancy. If we don’t solve this issue, it will mean more deaths, potentially more variants and poses problems for uptake of other vaccines.

But, especially after 18 months of bad news upon bad news, the need to find lightness in the dark is greater than ever. Enjoying one of the world’s biggest pop stars make fun of some of the UK’s biggest nerds felt like a mental break – even if the implications of what drove this unlikely beef spell potential disaster for our future selves.