Virginia Woolf considers the character and stories of the Rev CL Dodgson and identifies in him a man who “slipped though the grown-up world like a shadow”. She concludes that he never really wrote for children, but that his Alice stories are instead books in which we, the reader, become children again.

The complete works of Lewis Carroll have been issued by the Nonesuch Press in a stout volume of 1,293 pages. So there is no excuse – Lewis Carroll ought once and for all to be complete. We ought to be able to grasp him whole and entire. But we fail, once more we fail. We think we have caught Lewis Carroll; we look again and see an Oxford clergyman. We think we have caught the Rev CL Dodgson; we look again and see a fairy elf. The book breaks in two in our hands. In order to cement it, we turn to the Life.

But the Rev CL Dodgson had no life. He passed through the world so lightly that he left no print. He melted so passively into Oxford that he is invisible. He accepted every convention; he was prudish, pernickety, pious and jocose. If Oxford dons in the 19th century had an essence, he was that essence. He was so good that his sisters worshipped him, so pure that his nephew has nothing to say about him. 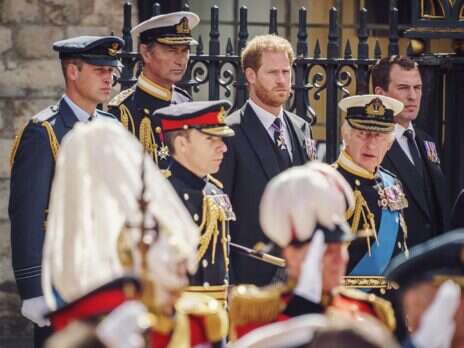 What Prince Harry’s Spare reveals about the savagery of monarchy

It is just possible, he hints, that “a shadow of disappointment lay over Lewis Carroll’s life”. Mr Dodgson at once denies the shadow. “My life,” he says, “is free from all trial and trouble.” But this untinted jelly contained within it a perfectly hard crystal. It contained childhood.

This is very strange, for childhood normally fades slowly. Wisps of childhood persist when the boy or girl is a grown man or woman. Childhood returns sometimes by day, more often by night. But it was not so with Lewis Carroll. For some reason, his childhood was sharply severed. It lodged in him whole and entire.

And therefore as he grew older, this impediment in the centre of his being, this hard block of pure childhood, starved the mature man of nourishment. He slipped through the grown-up world like a shadow, solidifying only on the beach at Eastbourne, with little girls whose frocks he pinned up with safety pins. But since childhood remained in him entire, he could do what no one else has ever been able to do: he could return to that world; he could re-create it, so that we too become children again.

In order to make us into children, he first makes us asleep. “Down, down, down, would the fall never come to an end?” Down, down, down we fall into that terrifying, wildly inconsequent, yet perfectly logical world where time races, then stands still; where space stretches, then contracts. It is the world of sleep; it is also the world of dreams. Without any conscious effort dreams come; the white rabbit, the walrus and the carpenter, one after another, they come skipping and leaping across the mind.

It is for this reason that the two Alices are not books for children; they are the only books in which we become children. President Wilson, Queen Victoria, the Times leader writer, the late Lord Salisbury – it does not matter how old, how important or how insignificant you are, you become a child again. To become a child is to be very literal: to find everything so strange that nothing is surprising; to be heartless, to be ruthless, yet to be so passionate that a snub or a shadow drapes the world in gloom. It is to be Alice in Wonderland.

Down the groves of pure nonsense we whirl laughing, laughing – “They sought it with thimbles, they sought it with care They pursued it with forks and with hope…” And then we wake. None of the transitions in Alice in Wonderland is quite so queer. For we wake to find – is it the Rev C L Dodgson? Is it Lewis Carroll? Or is it both combined?

This conglomerate object intends to produce an extra-Bowdlerised edition of Shakespeare for the use of British maidens: implores them to think of death when they go to the play, and always, always to realise that “the true object of life is the development of character… ” Is there, then, even in 1,293 pages, any such thing as “completeness”?

[See also: Lewis Carroll: revelations about Alice and her wonderland]