Akseli Gallen-Kallela’s route to becoming Finland’s national painter took him round the world, both geographically and stylistically. Although he is best known for painting the lakes and forests of his homeland and for his pictures illustrating the Kalevala – Finland’s native epic poem – his art bears a foreign imprint.

Gallen-Kallela was born in 1865 when the Grand Duchy of Finland was part of the Russian empire. The painter himself came from a Swedish-speaking region and although he trained initially in Helsinki, his real artistic formation took place in Paris (where he also became friends with August Strindberg), while he went on to learn fresco painting in Italy, exhibit with Edvard Munch in Berlin, study print- making in London, and live and paint in both Kenya and New Mexico. Over the course of his career, his pictures show the influence of a nap hand of contemporary art movements – from realism to expressionism via symbolism and art nouveau. So when Finland gained its independence in 1917, the man who was asked to design the new nation’s flag had seen something of both the world and its art.

In many ways, Gallen-Kallela’s search for an artistic identity mirrored that of Finland’s own struggle to emerge into the modern world. When he first went to Paris in 1884, only ten years after the exhibition that announced the arrival of the impressionists, he adopted the brown-hued and earth-tied style of Jules Bastian-Lepage rather than the bright and flickering spectrum of Monet et al. Gallen-Kallela’s figures, however, were tied to Finnish soil, not French. From his own rural upbringing, he was well aware of the hardships of working the land, and his representations of, say, an old and worn woman feeding a cat, or a young boy observing a crow, are totally without idealism and show archetypes – timeless examples of rustic poverty and grind. 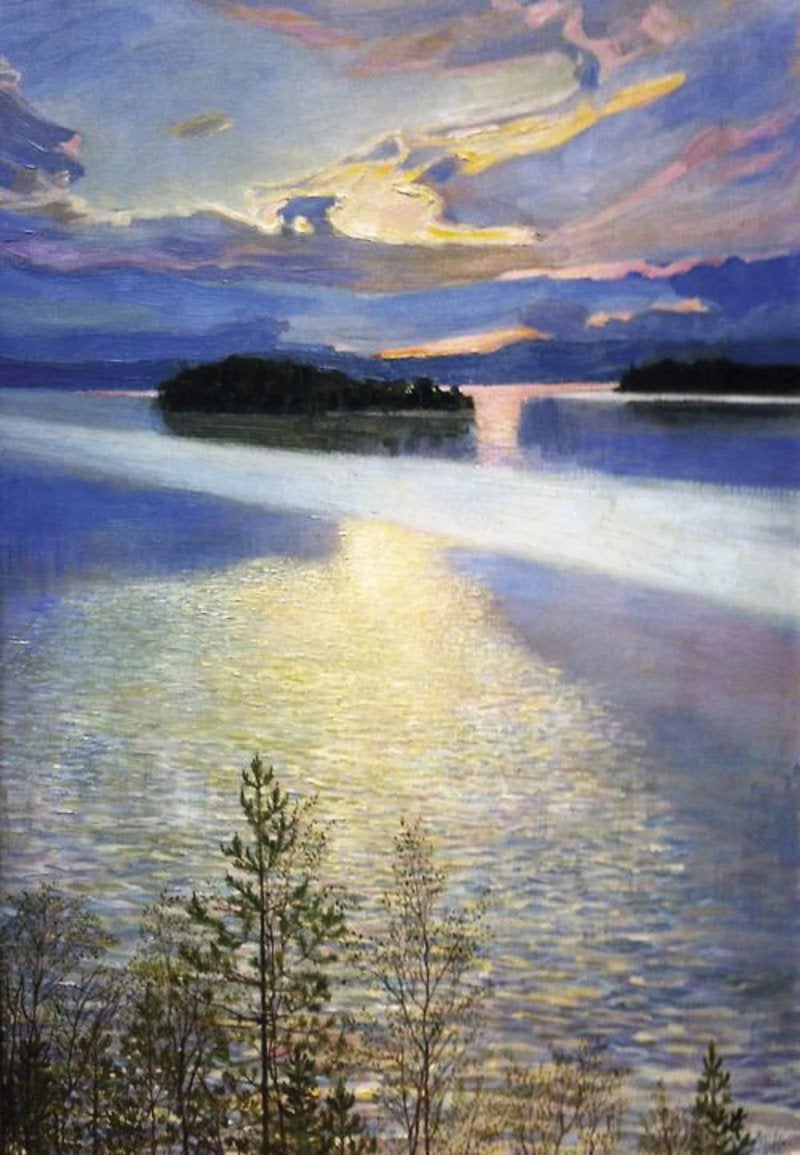 Such figures are nevertheless descendants of the mythological characters that fascinated him from the Kalevala. The book was first published in 1835, having been compiled by the botanist and linguist Elias Lönnrot from Finnish folklore and the still strong bardic tradition. Subtitled “old Karelian poems about ancient times of the Finnish people”, the verses tell a creation story in the Nibelungenlied vein: characters sing of their exploits, there are journeys, fights, a magic wealth-making object, love, jealousies and death. The Finnish landscape was the backcloth to it all, and the book quickly became identified with the burgeoning independence movement.

The Kalevala was a lifelong influence on Gallen-Kallela and, in 1925, he began designs for a fully illustrated edition, the Great Kalevala, which was to contain 450 images but which remained incomplete at his death in 1931. His obsession with the book was just one part of his nationalist fervour, however. In the 1890s, he had supported the Young Finns, a group formed to preserve and promote Finnish cultural identity; then, in 1907, he changed his name from Axel Gallén to the more Finnish-sounding Akseli Gallen-Kallela; and in 1918, during the civil war that broke out after the collapse of Russian power, he fought on the side of the conservative-minded and victorious “Whites”.

Nevertheless, he kept an eye on the outside world. From 1909 to 1910, he spent 16 months living in Kenya and, from 1923 to 1926, he was in New Mexico. There was a “what if?” to both stays: he left Africa shortly before the arrival of another Nordic exile, Isak Dinesen, and then New Mexico just before Georgia O’Keeffe moved there. Intriguingly, however, he was living at an artists’ colony next to a native American pueblo in Taos at the same time DH Lawrence was there. There is no record of them meeting.

In both countries, Gallen-Kallela painted snow-covered mountains – Mount Kenya and the Taos Mountains – and produced numerous works depicting the indigenous peoples. He found in these distant places not only echoes of the Finnish countryside but people who, like the characters of the Kalevala, represented an unbroken link to the original inhabitants of the land.

Although the subject of Lake View (1901), in the Finnish National Gallery, is ostensibly a sunset over one of the country’s many lakes, it is also a picture of national prehistory. It shows a scene both before man has arrived and after he has left, a home for the people of the Kalevala as well as for himself, a land, in fact, worth prising from Russia’s grip. It is also a picture in which Gallen-Kallela displays his mastery of styles: there is the miniaturism of the foreground treetops, the broader patterning of the ripples, the dull band where a breath of wind has crossed the water, the thick impasto of the islands and mountains, and the extraordinary rhythmical and swirling sky. The different handling turns each element into a distinctive character.

That striking diagonal band of matt water was to appear again in later lakescapes, where Gallen-Kallela described it as “Väinämöinen’s wake”, the trace made by the bard who is the central character of the Kalevala, as he rows his boat across the lake. The artist wrote to a friend that the “silvery stripes at the surface of the serene water are the wavelets announcing the passion to come”. So, beneath this image of a silent northern wilderness is also a remembrance of the mythical past and a presentiment of the future. For Gallen-Kallela, the genius loci here is Finland itself.

This article appears in the 21 Oct 2020 issue of the New Statesman, Ten lessons of the pandemic