Shortly before the general election in December 2019, Remain campaigners used focus groups to assess the prospects of the various leading pro-European politicians and their opponents. They wanted to test ways to limit the expected Tory surge. But they had a problem: hardly anyone in the focus groups had heard of the supposed “big beasts” of the organised Remain campaign. Those they had heard of were retired (John Major), retiring (Ken Clarke), disliked (Jo Swinson), or some combination of all three (Tony Blair).

Participants were shown pictures of Labour frontbenchers too. Jeremy Corbyn was widely recognised and strongly disliked, as was Diane Abbott, the then shadow home secretary. The other politicians were largely unrecognised. During one session, participants were shown a picture of Keir Starmer, the then shadow Brexit secretary, and asked to identify him. A silence fell upon the group, broken by one person shouting: “I know who that is, it’s David Cameron!”

When Starmer was elected Labour leader on 4 April 2020 his greatest priority was introducing himself to the electorate – and introducing himself favourably. To make the task even more challenging, he had to do so with much of the United Kingdom forcibly locked down, and the Conservatives benefiting from the global support for incumbent governments. As part of this trend, politicians as geographically and politically diverse as Israel’s Binyamin Netanyahu and New Zealand’s Jacinda Ardern surged in the polls.

Although Starmer has been the leader of the opposition for five months, he has yet to address Labour’s activists in person. The customary annual conference speeches will this year take place via Zoom at a special event called “Labour Connected”, which begins on 19 September. It is a measure of Starmer’s success as a leader that, despite unfavourable local and global circumstances, the Great British public increasingly knows who he is – and Conservative veterans are beginning to fear that his resemblance to David Cameron is not confined to confused focus group participants. 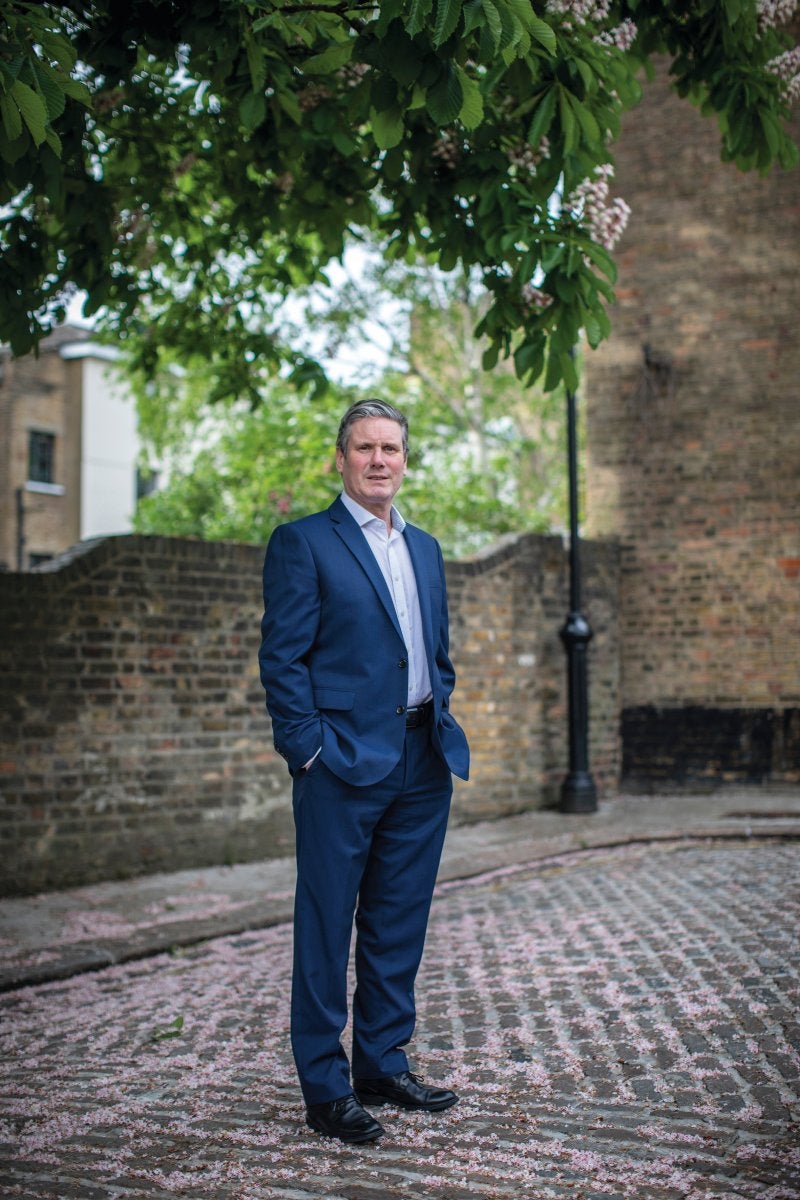 Like Cameron, Starmer inherited a party that had made a habit of losing elections: in terms of seats won, the 2005 election was the third-worst in the Tories’ modern history, and the 2019 election Labour’s worst since 1935. In both 2005 and 2019, the incumbent government had a large but not unassailable majority in the Commons, which nonetheless caused most people to write the opposition’s chances at the next election off long before it started.

Like Cameron, Starmer has established himself as an asset. He is more popular than the party as a whole, and his internal dominance at Westminster reflects that, as far as most Labour MPs are concerned, he is their best chance of returning to power. Cameron succeeded in reviving his party’s fortunes and leading it back into government; some Conservative MPs fear that Starmer will do the same for Labour.

A source of Tory comfort is that Starmer’s problems are similar to Cameron’s in 2005 (but the Labour rulebook makes it harder to tackle them). Just as Cameron struggled with his party’s right, Starmer faces a Labour left that is larger and more powerful within parliament than it has been since 1987. At present the Socialist Campaign Group (SCG), the talking shop of left-wing MPs, is divided over how to respond to the Starmer era and how to run itself. Some members, such as Lloyd Russell-Moyle, have argued that it should remain a caucus of like-minded MPs rather than an organisational force. But others want the SCG to agree common positions and take a stronger group line. The choices made by John McDonnell, the most active of the faction’s grandees, will be vital in deciding how the SCG operates. It could yet become more unhelpful – and with elections approaching for the general secretary roles at Unite, Unison and the GMB, it is possible that the biggest unions could all have firmly “Corbynite” leaderships by the end of the parliament. Cameron’s premiership was brought to an abrupt end, after he lost the EU referendum in 2016, by his right flank. Conservative MPs hope that Starmer’s left flank might stop him from becoming prime minister.

Starmer and Cameron share a recognition that many of Britain’s socially liberal voters are also economically conservative. Cameron sought to woo the socially liberal middle classes. He wanted to persuade those who were in sympathy with Tory economic objectives that they could have both social liberalism and traditional right-wing economies (the “double liberalism” championed by the Economist). Starmer’s aims run the other way: he wants to woo voters who are socially and culturally conservative but are economically on the left. Cameron wanted voters to know that he would “hug a hoodie”; Starmer wants them to know that he would make sure that the hoodie felt the full force of the law.

On both the left and the right, observers of Starmer detect the influence of his chief of policy, Claire Ainsley, who previously worked for the Joseph Rowntree Foundation and in the trade union movement. She is the author of a book called The New Working Class (2018), in which she mapped out the concerns and experiences of the voters in the “Red Wall” of once solidly Labour constituencies that voted Conservative for the first time in December 2019. James Frayne, the influential right-wing intellectual who set out much of the thinking that underpinned the Conservative advance among these voters in 2017 and 2019, is among the eclectic series of thinkers thanked in the foreword to the book.

Since becoming leader Starmer has appealed to the preoccupations and priorities of the new Tory-voting, Brexit-supporting working class. His tactical silences have been notable too. There have been small but significant gestures: opposition frontbenchers taking care to tweet their respects on the anniversary of the soldier Lee Rigby’s murder; Starmer’s support for retaining “Land of Hope and Glory” and “Rule Britannia” at the Proms. And there have been larger ones, such as Starmer’s vocal opposition to the Black Lives Matter campaign to abolish the police. Starmer is positioning himself against Corbyn on cultural matters.

Westminster loves an influential adviser, but the reality is that Starmer’s hiring of Ainsley is a consequence, not a cause, of his political focus. He is both more calculating – Nafzir Afzal, who served as chief prosecutor while Starmer was head of the Crime Prosecution Service, recently told me that Starmer was “always” thinking about politics – and more economically radical than he can appear. (In both respects, he is, once again, similar to Cameron, who was more right wing than he, skilfully, suggested.)

A preoccupation with the “new working class” also drives Starmer’s chief of staff, Morgan McSweeney, who managed his triumphant leadership campaign. (He had previously worked on Liz Kendall’s failed campaign in 2015.) The leader’s office understands, too, that the party’s problem is not confined to the seats lost in 2019. There are towns that are demographically similar to the 2019 losses, such as Harlow in Essex and Stevenage in Hertfordshire (both former new towns), which are now Conservative strongholds but remain vital if Labour is to win power.

Many frontbenchers had expected Starmer to run the party in the style of a micromanaging CEO, with the individual autonomy of MPs limited. Starmer had made it known that, unlike under Corbyn, shadow ministers should not consider themselves free to join local campaigns and rove into the briefs of other frontbenchers without his consent. In the event, most opposition frontbenchers have been surprised at how much freedom they have had to think about policy and campaigns.

The greater autonomy even extends to junior shadow ministerial appointments, with shadow cabinet members consulted about the make-up of their teams. The tone that Starmer wants them to strike is clear: good-natured professionalism that steers well clear of culture war topics. “It’s odd,” one shadow cabinet staffer muses, “because I feel like I have a lot of freedom, but of course, when I sit down and think, ‘OK, what’s a Keir Starmer response to this?’ you realise that the general tone has been set sufficiently strongly that it’s just they don’t need to tell us what to do a lot of the time.”

The lack of a strongly centralised operation is one reason the shadow cabinet is content, but it has already resulted in a few embarrassments. Rachel Reeves, who shadows Michael Gove, had to clarify her remarks after she called on Richard Leonard, the Scottish Labour leader, to “consider his position”.

Scotland remains a serious challenge. It is the one part of the UK where the Labour leader has, so far, singularly failed to change his party’s prospects. In that respect, too, he and David Cameron have something in common: Cameron saw a revival in Scotland as part of his political mission. He never managed it (although Theresa May did at the 2017 general election).

If Starmer cannot revive Scottish Labour, governing alone will require the kind of victories in England that were achieved by Tony Blair and Harold Wilson. Or he could hope for a major Liberal Democrat revival. In truth, Starmer’s route to victory lies not only through retaking the Red Wall seats that Labour lost in 2019 but also the seats it lost in 2005 and 2010, which is why he has visited Stevenage more than any other constituency since becoming leader.

There is, however, another view. Many believe Labour must capture the seats it won for the first time in 2017 – some of which, such as Canterbury, it held in 2019, and others, such as Kensington, which it lost. They feel that instead of emphasising the party’s patriotic and law-and-order credentials to win back the voters it has been losing for more than a decade (largely white, male and living in ex-industrial towns and small cities), Labour must seek to do even better in cities and their satellites. If it is to win seats where the party advanced or held steady in 2019, should Labour emphasise its liberalism rather than its economic radicalism?

For Starmer and his inner circle, a more economically and socially liberal Labour might do better electorally, but it would be at the expense of the party’s soul. Winning back seats Labour lost in 2019 and 2017 is not just about achieving power, but about what type of party it is. As one of his close allies put it to me, “we’re not the Democrats” (meaning a loose coalition of social liberals, big-city progressives and some trade unions). Labour is a party of the labour interest, of working people and the trade unions movement. It is this Labour Party’s desire to revive that historic identity that distinguishes it both from its recent Corbynite past and its electorally successful New Labour days. It’s not just victory Starmer aims for, but to save Labour as we know it.