Every single painting by the great ­German Romantic artist Caspar David Friedrich (1774-1840) had its origins in a complex idea that he expressed very ­simply: “A picture must not be invented,” he said, “it must be felt.” Feeling was the easy bit, how to give proper form to that feeling was harder. It was Friedrich’s particular gift to make his viewers sense that his paintings of figures staring into infinity, of ruined abbeys and empty shores, are “about” something, even if the nature of that something is far from obvious. It was a conundrum sensed by the Russian statesman (and friend of Pushkin) Alexander Turgenev, who in 1825 wrote of Friedrich’s work: “You may meditate over his paintings but not have a clear understanding of them, for they are vague even in his soul. They are dreams or daydreams.”

That Friedrich’s paintings were driven by a spiritual element, however, was not in doubt: echoing William Blake, he stated, “God is everywhere, in the smallest grain of sand” and he mixed this orthodoxy with the worship of nature. His urge to ­naturalise the divine was influenced by Ludwig Gotthard Kosegarten, a poet and pastor much admired by the young painter, who described the natural world as “the Bible of Christ”. In reading the one ­Friedrich was reading the other.

This did not mean that he saw his motifs – fir trees, fog, mountains, bare coastlines – as decipherable symbols but as carriers of sensation. “The artist’s task is not to represent air, water, rocks and trees faithfully,” he said, “but rather to reflect his soul, his feelings in them. The task of the work of art is to recognise the spirit of nature and to imbue it with heart and feeling and to absorb it and represent it.” The potency of Friedrich’s pictures of nature lies not just in that they ­reflect his soul but in their universality; they offer viewers images of their own too.

The complexity and profundity of Friedrich’s soul and its encompassing personality were nowhere better displayed than in his late masterpiece, The Great Enclosure of circa 1832, now in the Gemäldegalerie Neue Meister in his home city of Dresden. This large picture, more than a metre across, is indisputably a painting of a real landscape, but is perhaps best viewed as a spiritual exercise – an altarpiece without any of the paraphernalia of traditional religious art.

The painting shows the view over the Great Ostra Enclosure, an overflow plain in a bend of the river Elbe some four kilometres west of Dresden. It is a scene that contains precious little of note: a waterlogged, cratered foreground expanse; a low-banked river with a single boat floating idly by; flat meadows with lines of trees; some low hills and a big sky. The painting has a slightly raised viewpoint but no one focal point, no real subject, and no vanishing point. The downwards curve of the river is echoed in the upwards curve of the illuminated clouds. The day is gently turning into night but despite the sunset hues the palette is limited. Heinrich von Kleist described this sensation of silence and space when discussing another of Friedrich’s pictures: “The feeling one has gazing at it is as though one’s eyelids had been cut away.” 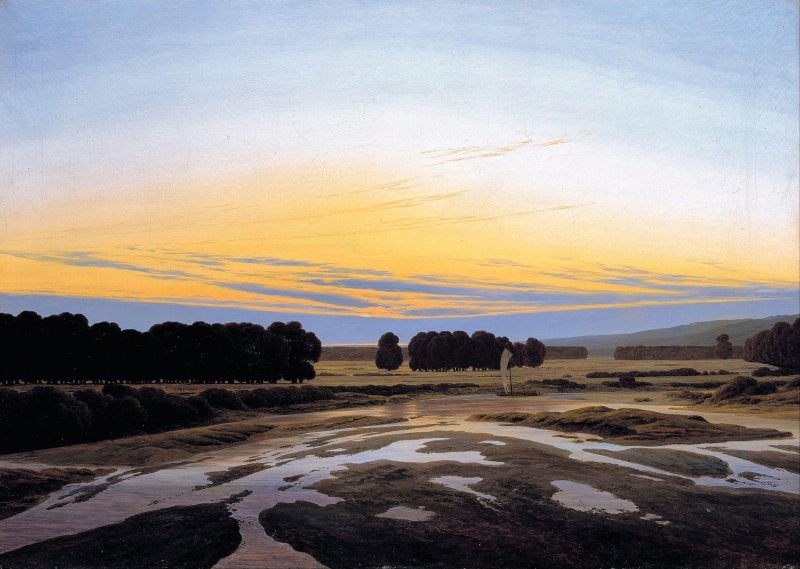 This unremarkable spot also offered Friedrich a technical challenge. “What the newer landscape artists see in a circle of a hundred degrees in Nature,” he wrote, “they press together unmercifully into an angle of vision of only 45 degrees.” In his picture he set out to retrieve those missing 55 degrees and give every one of them full measure. He habitually based his paintings on a cruciform structure – here the flat line of the meadows with the lone tree marking the central axis – but the subtle curvature of water and clouds that mimic the curvature of the Earth was his way of turning a ­restricted view into a panorama.

The scene that Friedrich painted no longer exists today. At the end of the 19th century the enclosure was banked up and turned into an abattoir complex – the biggest in Europe – and today is an industrial area and sports park. If the ghost of Friedrich is hard to find there so too is an earlier incarnation, which was, perhaps, lodged somewhere in the artist’s consciousness as he painted. In August 1813, when Napoleon occupied Dresden, he reviewed his troops on the Ostra enclosure. It was, said an eyewitness: “A grand review… with all the circumstance of military pomp, at which the King of Saxony, his brothers and nephews, and all the principal marshals and dignitaries of the empire assisted.” Some 5,000 cavalry and 14,000 infantry took part: “The multitude of uniforms, costumes and nations, which were then assembled, strongly bespoke the heart-stirring nature of the contest which had thus divided the world against itself in arms…” The display was the prelude to the Battle of Dresden later that month, which resulted in a French victory over an allied coalition.

Friedrich was not there to see the muster of troops since he had taken himself off to the mountains on the Czech border in search of peace and quiet. Nearly 20 years later, when he returned to the spot, every hint of the martial glamour associated with the enclosure had disappeared without a trace. Instead of the glint of sun on breastplate and swords there was just the sunset reflected in the river’s marshy overspill.

The type of feeling exemplified by Friedrich’s art was not always welcomed in his own time. In 1809 a conservative critic and Saxon court functionary named FWB von Ramdohr attacked the way Friedrich treated religion through what he saw as the low guise of landscape and bemoaned “that mysticism, that is now insinuating itself everywhere, and that comes wafting towards us from art and science, from philosophy and religion, like a narcotic vapour”.

In the mid 20th century, Friedrich’s reputation was under assault again, this time as a result of his landscapes being co-opted into the blood-and-soil propaganda of the Nazis. He did paint one explicit picture, in 1814 at the end of the Napoleonic Wars; an image of a lone French chasseur lost in the German forests. But he was not a political artist. In The Great Enclosure, nature may have reasserted itself, erasing all trace of the French invaders, but Friedrich’s aim was numinous not nationalist. Nevertheless, the taint was such that Kenneth Clark, the wartime director of the National Gallery, could dismiss him as working “in the frigid technique of his time, which could hardly inspire a school of modern painting” and of encroaching with paint on the terrain of poetry.

In fact, Friedrich’s own blood and soil were not fully German. He was born in Greifswald on the Baltic coast in Pomerania, a region that at the time belonged to Sweden, and was, as an early patron called him, a “Norseman”. His father was a candle and soap maker who brought his children up as Lutherans with a distrust of religious imagery rather than as Catholics. Friedrich studied initially locally and then at the ­Copenhagen Academy. It wasn’t until 1798 that he moved to Dresden.

His was a far from idyllic childhood, however. He lost his mother aged seven, and then two sisters, while in 1787 he watched his younger brother Johann Christoffer drown when he fell through the ice of a frozen lake. He may have been trying to rescue a stranded 13-year-old Friedrich at the time. This last tragedy probably contributed to the depressive episodes that the painter suffered throughout his life and that ­tellingly coincided with his paintings of tumbled churches and graveyards.

Friedrich’s art could nevertheless give a false impression of the man. As one Russian visitor wrote in 1821: anyone who expected to find the painter “meditative and melancholic, with a pale face and poetic rapture in his eyes, would be quite wrong”. Another friend noted that: “I have met few people who have such a gift for telling jokes and such a sense of fun as he did, providing that he was in the company of people he liked.”

But company was an equivocal pleasure for the painter. “I love society,” he said, “yet in order not to hate people, I must avoid their company.” Such was the intensity of his immersion in the natural world that he insisted: “I must stay alone and know that I am alone to contemplate and feel nature in full; I have to surrender myself to what encircles me, I have to merge with my clouds and rocks in order to be what I am. Solitude is indispensable for my dialogue with nature.” At times he took things too far. He recorded how he had once spent a week alone in the forested hills near Pirna further down the Elbe: “Even for me it was a bit much.”

Solitude, however, is the predominant mood of The Great Enclosure: the identification of Wordsworth’s “sense sublime of something far more deeply interfused” cannot be achieved with others present. There is an unwilled aspect to Friedrich’s aloneness too. By the time he painted the picture both his reputation and his income were in decline and he was seen as an eccentric and a recluse. Within a couple of years he was to suffer a stroke that left him with limb paralysis and unable to paint in oils.

The most frequently used element of Friedrich’s pictorial vocabulary was the Rückenfigur – the figure seen from behind – most famously present in his circa 1818 painting Wanderer Above the Sea of Fog. This faceless spectator can be variously interpreted as representing the painter, the individual viewer, or the personification of humankind itself surveying the infinite mystery of nature and sensing our own insignificance in front of it. The Great Enclosure is a painting that has lost its Rückenfigur. Friedrich is not so much trying to display what the experience of mystical feelings might look like as genuinely experiencing them. He, and therefore we, have stepped through the frame and into the picture.

It is hard to resist looking at the painting and that modest little boat in the gloaming – so carefully placed according to the golden section – and seeing, in its slow and darkening journey along the river and out of sight, the painter reflecting on the passage of his own soul.

This article appears in the 28 Jul 2021 issue of the New Statesman, Summer special