In this unsigned profile of the novelist and journalist, the author casts his eye over the career of Graham Greene. He finds in Greene a writer of international repute and success but a man difficult to decipher. In him were mixed schooldays that he hated, an adherence to a difficult interpretation of Catholicism in which sin is more real than redemption, wanderlust and a prescience about which part of the world was about to flare into trouble. These traits, with an added intolerance for do-gooders, are, suggests the writer, what gives Greene’s novels their power.

“Grum Grin – très formidable!” said the young man from the Sorbonne, and the awe in his voice made the point. Graham Greene is the one living English novelist who arouses responses of curiosity and attention comparable to those for Malraux and Silone, Sartre and Camus, Faulkner and Hemingway. Like them, he is somehow more than his books: he is indeed almost a way of life.

It is absolutely in character that his new novel, A Burnt-out Case, is set in the Congo and that Greene was there immediately before its troubles exploded upon us, just as it was in character that his last novel, Our Man in Havana, should have anticipated Castro’s revolution and that The Quiet American before that should have been played out against the background of the Indo-China War.

An early novel was called It’s a Battefield, and it would be easy to see in Greene an instance of the novelist as special correspondent – easy, yet not quite true. He is one of the most brilliant journalists of the age, and his is the international scene as it has been no novelist’s before him. Yet, whatever the locale of his fiction and no matter how vividly rendered, whether Sweden, Mexico, Sierra Leone, Vietnam, Cuba, the Congo or London, the author is still plainly in Greeneland, annihilating all that’s made to a Greene thought in a Greene shade.

Whatever its name, Greeneland is most uncomfortable territory and the aboriginal Greenelander a most uncomfortable person. Of all living authors, he is the one least likely to find himself saddled with a CBE, much less with a K. A Catholic convert, his Catholicism is of a kind that causes scandal and pain among Irish and American Catholics and is no great solace to the Catholic Establishment in Europe. It was typical of him to attack the Cardinal-Archbishop of Paris for refusing Christian burial to Colette; and didn’t the Tablet accuse him of Jansenism when The Heart of the Matter appeared?

A clue to his character may lie in his kinship with RL Stevenson, to whom be is related on his mother’s side. Stevenson has greatly influenced him as a novelist, but one feels the affinity between them goes beyond that. At one time Greene planned to write Stevenson’s biography: it might well have thrown light on Greene as well. Certainly in his own career he has translated into reality his collateral’s hankering after the life of action; and complex as Stevenson was, Greene is every bit as complex.

Now 56, Greene is one of the four sons of the late Canon Greene, for years headmaster of Berkhamsted School. All the brothers were there in turn. Between them, they have done pretty well. An elder brother, Raymond, is distinguished both as a physician and a mountaineer and was medical officer to the Everest Expedition of 1933. A younger brother, Hugh Carleton, is Director-General of the BBC and sometimes suggests with his faintly Pickwickian features the fat man who has struggled out of the thin man that is Graham. The fourth brother, Herbert, is currently organising, through the agony column of The Times, the campaign to bring back the Nine o’clock News.

From Berkhamsted Greene went up to Balliol with an exhibition in modern history. He joined the Communist Party (“to subvert the subversives”: 30 years later it led to his being refused a visa for the United States), published Babbling April, a book of verse, and took a Second. He entered journalism in Nottingham, where he was received into the Catholic Church, and then joined The Times as a sub-editor in the correspondence department. He resigned when his first novel appeared in 1929.

In the years that followed he made the march across Liberia described in Journey without Maps, became the most savage film critic of the day and helped to float a weekly. Greene’s reputation as a novelist was established in 1938 by Brighton Rock. International fame followed in the years just after the war with The Heart of the Matter and with the films Fallen Idol and The Third Man. He must now be among the wealthiest of living English writers.

It seems, to those who knew him in the days when he lived in Clapham Common before the war, that success has scarcely touched him. The gaunt, lined face is puffier than it was, but, caught off guard, the exophthalmic eyes are still haunted and wary; in conversation, the rueful cheerfulness, the contemptuous gibes at the successful, the established, the stuffy, and the fantastic booby-traps ad-libbed for their discomfiture, remain.

So does the generosity to young writers. Like Wormald, in Our Man in Havana, he collects whisky miniatures. Once a great practical-joker, he is now an indefatigable letter-writer to The Times. More than ever, perhaps, the impression he creates is that of loneliness and boredom. 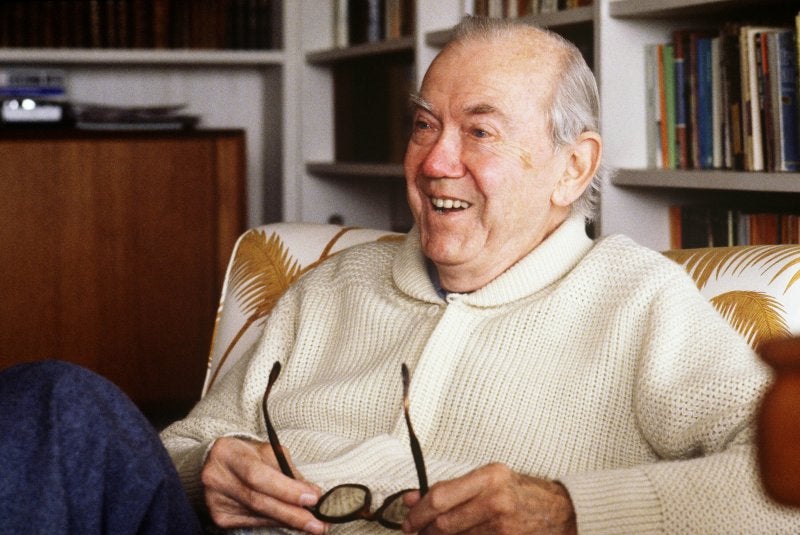 Image: Graham Greene at his home in Nice, France, 3 May 1982. AFP/AFP via Getty Images

In an essay “The Revolver in the Corner Cupboard”, he says that as a schoolboy of 17 “boredom had already reached an intolerable depth”. Unhappy at school, he had tried to run away. “The psychoanalysis that followed my act of rebellion had fixed the boredom as hypo fixes the image on the negative.” He found his elder brother’s revolver, “a small genteel object with six chambers like a tiny egg stand”, and took it with him to Asbridge Park to play Russian roulette.

“I slipped a bullet into a chamber and, holding the revolver behind my back, spun the chambers round. . . I put the muzzle of the revolver to my right ear and pulled the trigger. There was a minute click, and looking down the chamber I could see that the charge had moved into place. I was out by one. I remember an extraordinary sense of jubilation. . . My heart was knocking in its cage, and I felt that life contained an infinite number of possibilities.

“It was like a young man’s first successful experience of sex – as if in that Asbridge glade one bad passed a test of manhood.”

He took the revolver up to Oxford with him and kept on playing Russian roulette until he discovered that, “I was beginning to pull the trigger about as casually as I might take an aspirin tablet.”

It is difficult not to see this adolescent episode as the first instance in a recurring pattern. Reading “The Revolver in the Corner Cupboard” now, one’s mind leaps naturally to the much more recent account of Greene’s experiments with opium in Saigon and goes on to fill up the intervening years: the march across Liberia, the journey into remote Mexico, the penetrations into war-stricken Malaya, Indo-China, Kenya: tests of manhood that are somehow bound up with experience of sex.

Behind it, however, one feels there must be the unhappiness of childhood. Peter Quennell, who was at school with Greene has written recently that he finds the novelist’s recollections of Berkhamsted “strangely transmogrified”. Maybe; but Greene was the headmaster’s son, the school was also his home, and the split between them was inevitable. He had a sense, he tells us in The Lawless Roads, of living on a border, a border symbolised by the green baize door between his parents’ quarters and the school.

This image of the border, of contiguous worlds in opposition, and of human beings caught between them runs throughout Greene’s fiction; but in the opening chapters of The Lawless Roads it is pin-pointed in childhood terms. On the one side of the green baize door, home and security, the pet rabbit nibbling at the croquet lawn; on the other, a place whose inhabitants “bore about them the genuine quality of evil. . . Callifax who practiced torments with dividers, Mr Cranden, with pale bleached hair, a dusty gown, a kind of demoniac sensuality.”

There follows Greene’s gloss on Wordsworth: “Hell lay about them in their infancy.” He adds: “One began to believe in heaven because one believed in hell, but for a long while it was only hell one could picture with a certain intimacy.”

One is bound to say that if Greene can now picture heaven with intimacy, he hasn’t yet done so on paper. But all the evidence suggests that Greene’s Catholicism has wrought no fundamental change in him, has perhaps done no more than provide an intellectual basis for a temperamental predisposition (“I had not been converted to a religious faith. I had been convinced by specific arguments in the probability of its creed.”)

In Greene’s view, as one gets it from his books, the Fall is real and sin and sinners real. Beyond that, he might well echo Silone’s: “In the sacred history of man on earth, it is still, alas Good Friday.”

Fallen man on the one hand, the incalculable Grace of God on the other. And in between? Not much. Scarcely at any rate the Church as an organisation. Not much more in fact, than Greene’s identification with an angry pity for his fellow sinners.

And this in the end is what gives his work its importance. It was this that enabled him, for instance, to write what were quite the best reports of the Mau Mau rising to appear anywhere. And though he may have nothing but contempt for the panaceas of liberals and humanitarians, the confident schemes of American do-gooders, it is this that allows him to write both with sympathy and with respect of Communist leaders in colonial territories.

The police lieutenant is almost the twin-hero, with the whisky-priest, of The Power and the Glory; and in his visits to Indo-China it was to Ho Chi Minh, a man “pure as Lucifer”, that he responded, not to the Catholic President of Vietnam.