Whistles are being blown all over the place and there’s no denying that right now, Facebook is in a lot of trouble. We know a lot about how the company collects and uses our data for nefarious ends, but do we know everything? For years, people have speculated that Facebook and Facebook Messenger use your phone’s microphone to listen to your conversations and send you targeted adverts based on your IRL chats.

In 2016, Facebook denied eavesdropping in an official statement, but rumours have prevailed. A quick Twitter search shows that in the last week, people have complained of being presented with adverts for palm reading, mobile phones, and sandwich makers  after having conversations about these products. Now Cambridge Analytica whistle-blower Christopher Wylie has told a Commons committee that its “possible” Facebook listens to your “environmental context” via your microphone.

To clarify, Wylie admitted he doesn’t actually know if Facebook is listening. He said that apps could theoretically listen to your environment (are you in a crowded place? Are you alone?) to better serve you adverts. “That’s probably a question for Facebook,” Wylie said.

Experts note that cognitive biases or excellent algorithms are more likely at play. Rather than Facebook listening to your chats, it’s argued the app simply knows you so well it knows in advance what kind of things you talk about. Psychologists note that chatting-about-something-and-then-seeing-an-ad is simply an example of the frequency illusion, meaning once you’ve had something brought to your attention, you’re likely to notice it again. If you hadn’t had a chat about diet tea, you may not have noticed the diet tea advert, etcetera, etcetera.

To put the rumour to rest, we at the New Statesman engaged in a very scientific test. Each employee had a scripted conversation in front of their phone with Facebook or Messenger open (after changing their settings to ensure that Facebook and Facebook Messenger had access to their microphones).

In order to remove extraneous variables, these conversations were about things that each New Statesman writer had not previously Googled, were not within their interests, and were not relevant to their lives. They were not allowed to Google the items/topics after our conversation, because that’s just good science.

Here’s what went down.

Test #1 – The Princess and the Peperami 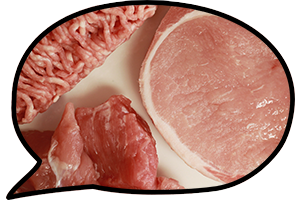 Anna, the New Statesman’s deputy culture editor, has been a vegetarian for three years. Our scripted conversation was about how Anna had decided to return to meat eating – something Facebook wouldn’t know from her online activity, because it’s not true. The only way Facebook would advertise Anna meat or meaty products, then, is if it heard our conversation.

Here is an extract of our chat:

Anna: So I’m thinking of giving up vegetarianism

Amelia: What? But hasn’t it been like, five years?

Amelia: But what about your ethics and principles and stuff?

Amelia: Couldn’t you just get iron tablets from Holland and Barrett?

Anna: Leave me and my ham alone

Keywords mentioned in our script: Peperami, Domino’s Meat Feast, “a service where you could subscribe to have, like, meat delivered to your door”, Mattessons Fridge Raiders, iron tablets, Holland and Barrett

The most recent advert Anna saw on Facebook BEFORE our experiment: FreePrints, THE app to print photos 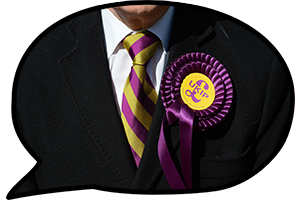 Pauline is our resident Frenchwoman and writes very passionately on the rights of EU citizens living in the UK. For context, she has short hair and is really great at providing us with proper nice French cheese, such as brie.

Here is our chat, edited for length:

Pauline: I need to tell you something really important. I’m making a big life decision.

Amelia: What is it?

Pauline: I think I want to join Ukip. I just think Britain should be for the British.

The most recent advert Pauline saw on Facebook BEFORE our experiment: Southern Railway

Test # 3 – Stepping into someone else’s shoes 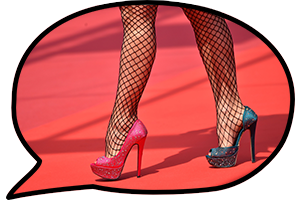 As an excellent human being, Anoosh enjoys wearing Dr. Martens and not listening to the solo stylings of former One Direction band member Niall Horan. Our conversation was about the perfect “pink, glittery” stilettos she wanted to buy for a low, low cost. After discussing shoes, we chatted about where she would wear them.

Anoosh: I’m going to a Niall Horan concert in Ireland

Amelia: Niall Horan from One Direction?

Anoosh: I love him deeply, I just love Niall Horan

Amelia: Have you got tickets to see him?

Anoosh: Nope, not yet. I need to find them cheap enough

Amelia: Hmm… cheap tickets for Niall Horan in Ireland, that could be tricky!

Amelia: Yes. Well good luck with that Anoosh, it sounds like you’ve got a lot on.

The most recent advert Anoosh saw on Facebook BEFORE our experiment: Gett black cabs 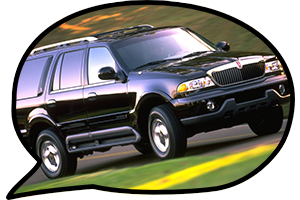 Editorial assistant and environment writer India has had the same car since she was 17. It is currently at her parents’ house, uninsured. She cares about the environment and stuff.

We chatted about her search for a new “gas-guzzling” 4×4, SUV, off-road vehicle (in silver!) and where to sell her old car. Then, we talked insurance.

Amelia: And you’ll need insurance, I like those adverts with the meerkats

Amelia: Truly a conundrum for our age

The most recent advert India saw on Facebook BEFORE our experiment: Wolford clothing 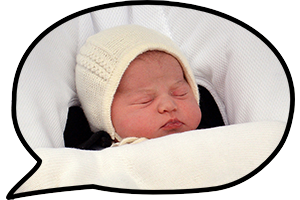 In 2012, Facebook was criticised for advertising to pregnant women based on their baby’s due date or gender. In this script New Statesman sub-editor Lizzie – who is not with child – talks about being with child. A lot.

Lizzie: I have a dark and terrible secret and you’re the only one I can confide in

Amelia: What is it? Are you okay?

Amelia: Have you taken a test?

Lizzie: Not yet, I don’t know, I’m scared

Amelia: You should try Clear Blue or something.

… I have to go now, I need to create a Mumsnet profile

The most recent advert Lizzie saw on Facebook BEFORE our experiment: Zipcar UK 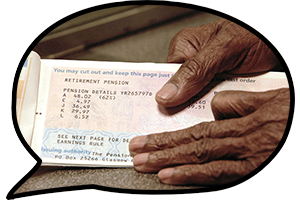 I chatted with digital sub-editor Indra about her desire to find a private pension plan before we went on to discuss private healthcare. Indra then shared her secret plan to visit North Korea with a travel agency, provided she could find cheap flights.

Indra: Yeah, BUPA could be cool. I need to be in good health because I want to go to North Korea

Amelia: You want to go to North Korea? I’m not sure that’s a very good idea. How about South Korea?

Indra: I guess, if I can find cheap flights to South Korea… I could go

The most recent advert Indra saw on Facebook BEFORE our experiment: Tough Mudder

Like all good scientists, I am going to lead with the most scandalous and shocking results.

In our conversation about contraception, Lizzie read from the script: “I just wish there was an app that would sort it all out for you… some kind of contraception app”. When she opened the Facebook app this morning, she was presented with an advert for Natural Cycles, the first app ever certified for contraception in Europe. 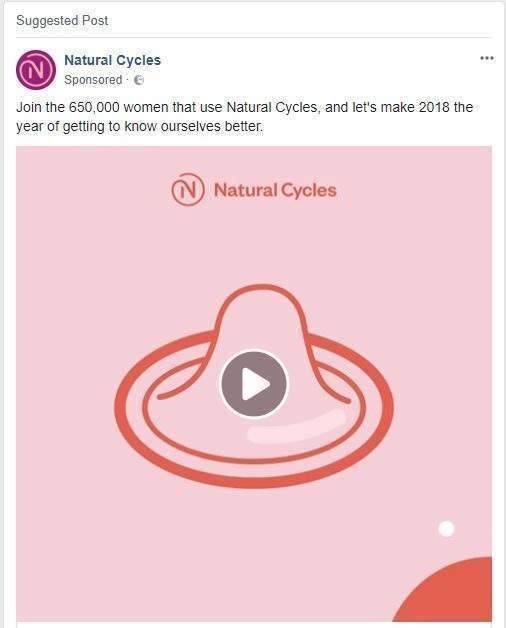 Lizzie, who does not want children, was also presented with an advert about how to keep her child safe online after our conversation about her “pregnancy”. When she clicked the Facebook option “Why am I seeing this ad?”, the social network told her the advertisement was targeted to people with an interest in “family”. Pause here for dramatic effect.

Except, well, the ad was also targeted to people “age 25 to 55 who live or were recently in the United Kingdom” which is exceptionally broad and also Lizzie. The Natural Cycles thing is spooky at first, but likely also targeted by generic factors such as age and gender. So were other members of New Statesman staff presented with targeted adverts based on their conversations? Pauline saw an advert for Sainsbury’s – which we mentioned three times in our conversation – but alas she had seen this before.

So the answer is: no, not really.

In the 24 hours following our discussion about meat, Anna saw adverts for: Ingrid Goes West, Hayu (a reality TV streaming service), Battle Of The Sexes, The Bella Gadgets Posture Corrector

After our chat about Ukip, cheese, supermarkets, and hair, Pauline was presented with ads for: Museum of London, Barbican Centre, The Economist, Amazon Kindle, Southern Rail, Sainsbury’s, Disneyland Paris

Niall Horan-loving and stiletto-wearing Anoosh saw adverts for: Esso (which we noted, in our quest for science, does sound an awful lot like “Stiletto”), Old St. Records, Barbican Centre, National Theatre, Lovebox (where Niall Horan is regrettably not making an appearance).

Notably, she did also get an advert for a service called Cudoni, tagged with the line “Sell Your Luxury Items Online.” In our script, Anoosh did say the words “designer labels”, and she has never previously been presented with luxury item adverts on Facebook. That said, connecting this to our conversation is probably what’s known in the scientific community as “reaching”.

And Indra, who chatted with me about North Korea and pension plans, saw: McDonald’s, Uncle Ben’s, Netflix, Profit squirrel (“the #1 way for students to make money online”), Adidas

Now this may not have been the most scientific of sciencey things, but the experiment replicates real world experiences. That is to say, when people claim Facebook is listening, they most often claim to see adverts for things that they’ve never Googled, shortly after chatting about them once in real life. In our experiment, this wasn’t the case.

That’s not to say Facebook isn’t a naughty boy (and of course it could still emerge that it has used your microphone this way in the past). However, the prevailing myth of the microphone proves that the way we think about privacy is all wrong. Rather than worry about the most scandalous thing the site could or might do, worry about the multitude of smaller privacy invading scandals that have allowed Facebook to get so much information on you.