Imagine the scene. Theresa May’s government faces a critical Brexit vote – this spring, perhaps – on whether Britain should remain in a customs union; or in October on whatever divorce deal it has managed to negotiate with the European Union. With the support of the Democratic Unionist Party (DUP), and through ferocious pressure from Conservative whips on the party’s Europhile backbenchers, the government believes it has just enough votes to carry the day.

Sinn Fein then makes its dramatic move. It announces that for this vote, and this vote only, it is abandoning its century-old policy of abstentionism. After an emergency Ard Fheis (party conference) its seven MPs come to Westminster, swear allegiance to the Queen through gritted teeth, and ensure the government’s defeat.

In doing so Sinn Fein saves the island of Ireland from being divided by a new hard border, or even from Brexit itself.

Its popularity soars not only in the Republic, but also in Northern Ireland, which voted to remain in the EU in the 2016 referendum, and among millions of delighted British Remainers. It finally sheds its lingering pariah-hood – a legacy of its days as the political wing of the Provisional IRA.

There’s more. The government’s defeat triggers a general election. Jeremy Corbyn becomes prime minister. Corbyn, a long-time republican sympathiser who hosted two convicted IRA terrorists at the Palace of Westminster shortly after the 1984 Brighton bombing outrage, duly approves the referendum on Irish unity that is provided for by the 1998 Good Friday Agreement. The goal for which Irish republicanism has fought since the 1780s is within reach.

Or it might be, were it not for the fact that even now, despite the enormous threat that Brexit poses to the welfare of Britain and Ireland, Sinn Fein refuses steadfastly to drop the abstentionist policy to which it has adhered so rigidly since its first MP, Joseph McGuinness, was elected to Westminster in 1917. Sinn Fein’s Countess Constance Markievicz, the first woman elected to the House of Commons, refused to take her seat in 1918. So did the hunger striker Bobby Sands, elected from his death bed in the Maze prison in 1981, and countless others.

The party’s MPs have used their Westminster offices since 2002, and collectively claim several hundred thousands of pounds a year in parliamentary expenses. But Sinn Fein categorically insists that its MPs will never take the oath to “be faithful and bear true allegiance to Her Majesty the Queen” that is required before they can sit in the chamber or vote. To do so would recognise British sovereignty over the island of Ireland’s six northern counties.

Senior Sinn Fein sources acknowledge the temptation to “screw” the government and the DUP, but contend that the party campaigned on an abstentionist ticket at the last election and would never be trusted again if it reneged on that promise. They argue that Sinn Fein could not complain about British interference in Irish affairs if its MPs interfered in the British parliament. They insist that not a single party member is pressing for its MPs to take their seats at Westminster. “Sinn Fein’s approach could not be clearer – we do not take seats in the British parliament,” Chris Hazzard, the MP for South Down, told the New Statesman. 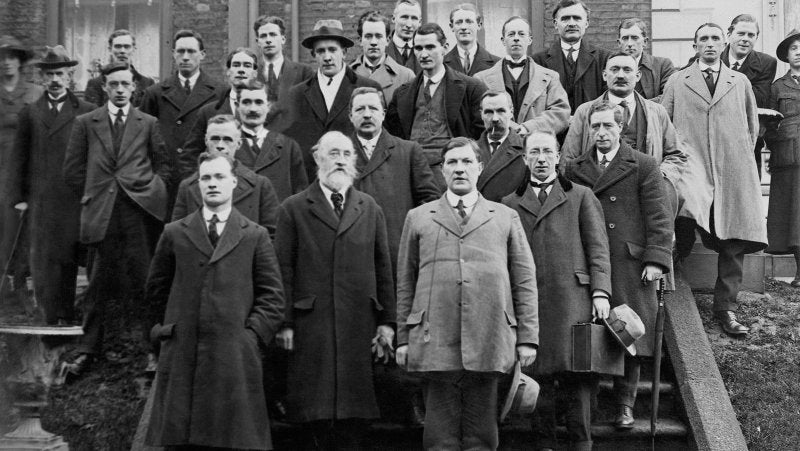 Old guard: the Sinn Fein MPs who proclaimed themselves the parliament of Ireland in Dublin, 1919​. Credit: Associated Newspapers/ Rex

There are other reasons for Sinn Fein’s intransigence. Abandoning abstentionism would undoubtedly split the party, some of whose members are not entirely happy about its renunciation of violence as part of the Good Friday Agreement. In 1926, and again in 1986, it split over the much less controversial issue of whether to abstain from the Irish parliament, the Dail Eireann, which republican purists refused to recognise because it was established after Ireland’s partition.

Privately, moreover, Sinn Fein’s leaders may calculate that their political purposes are best served by allowing the British government and its DUP enablers to press ahead with plans for a “hard Brexit”, thereby driving yet more nationalists into its camp. “Nationalists feel Brexit is a betrayal of everything the Good Friday Agreement stood for and all its compromises,” explained Steven McCaffery, editor of the Detail, a well-regarded Belfast political website. “A hard Brexit would accelerate constitutional change in the sense that the nationalist community is on the cusp of becoming the majority community here and would not live with that.” Unionism, he added, “is throwing its future on the roulette wheel”.

Sinn Fein nonetheless faces growing pressure from Dublin to reconsider its abstentionist policy, given the grave threat that Brexit poses to the Irish Republic. Leo Varadkar, the taoiseach and Fine Gael leader, has called on Sinn Fein to take its seats at Westminster in order to “make things better for Ireland”.

Brendan Howlin, leader of the opposition Labour Party, insisted: “It is now time for Sinn Fein to step up to the plate and defend the interests of the island of Ireland.” Micheál Martin, Fianna Fáil’s leader, has argued that it is “totally illogical for Sinn Fein to say they can stay out of Westminster given that Brexit is the single greatest issue facing our generation”.

The arguments in favour of Sinn Fein using its votes in the Commons have seldom, if ever, been so compelling. Consider the maths: through its £1bn bung to secure the DUP’s support, Theresa May’s government has nominally 326 votes in the Commons, giving it a majority of 13. Add a few Labour Brexiteers to the government’s tally, but subtract rather more Tory rebels, and Sinn Fein’s seven MPs could find themselves in a position to ensure the government’s defeat on Brexit. As an unnamed cabinet minister admitted to the Times: “I keep thinking:  ‘If Sinn Fein take their seats, we really are stuffed.’”

Were it to seize that opportunity, Sinn Fein would be pilloried by some of its supporters. But it would earn the gratitude of an Irish Republic worried desperately about the political and economic consequences of Brexit; of the 56 per cent of people in Northern Ireland – Catholic and Protestant – who voted Remain and want to maintain an open border; and of millions across England, Scotland and Wales who are appalled by Brexit’s likely damage to Britain’s financial health and international stature.

Sinn Fein is already well on its way to becoming a respectable, mainstream party, with new leaders in Dublin and Belfast – Mary Lou McDonald and Michelle O’Neill – who have none of the IRA baggage of Gerry Adams and Martin McGuinness. On 2 March, in a headline that would have been inconceivable in a British paper ten or 20 years ago, a Guardian opinion piece proclaimed: “Come to parliament, Sinn Fein, as saviours of Ireland – and Britain”.

The converse is also true, however. If a hard border is reimposed, if Brexit proceeds, Sinn Fein would blame the DUP, but it would itself be vulnerable to the charge of having allowed this to happen; of failing to fight for the best interests of Ireland – north and south – in the forum that matters most: the House of Commons.

Since the Social Democratic and Labour Party (SDLP) lost its remaining three seats in last June’s general election, Northern Ireland has found itself in a dire predicament – especially given the potentially enormous impact Brexit could have on its future. Sinn Fein’s abstentionism means that for the first time in half a century, nationalists have no voice whatsoever at Westminster, and that a province which so unequivocally rejected Brexit is represented there by ten DUP MPs who are all committed Brexiteers. The solitary Northern Ireland Remainer in parliament is Lady Sylvia Hermon, the independent unionist MP for North Down.

To make matters worse, Northern Ireland’s devolved government has been suspended for the past 14 months over an unrelated dispute between Sinn Fein and the DUP, meaning that the province’s nationalists and Remainers have been unable to fight their corner at Stormont, either. The DUP, by contrast, enjoys something not far short of a veto over the British government’s policy.

McCaffery sees minimal chance of Sinn Fein’s MPs abandoning abstentionism. “I can’t see any situation right now where that’s going to happen,” he said. “If it ever did happen it would require a really particular set of circumstances at a moment where it was clear their intervention was absolutely vital and would have huge political benefits for the party.”

Marie Coleman, a senior lecturer in modern Irish history at Queen’s University Belfast, agrees: “Most commentators and the electorate in Britain would say: ‘It’s obvious. They could make or break a government.’ But that fails to appreciate the extent of their ideological commitment, and the whole basis of Sinn Fein as an Irish republican party.”

These experts are almost certainly right, but then the story of the peace process over the past quarter-century has been that of ancient taboos being shattered one by one, of previously unthinkable developments coming to pass. Who would have thought that Sinn Fein, after 30 years of republican violence, would accept the Good Friday Agreement’s stipulation that Irish unity can only happen with the consent of a majority of the people of Northern Ireland? Or that Sinn Fein would share power with Ian Paisley’s DUP at Stormont, the great white edifice overlooking east Belfast that was for decades a symbol of Protestant domination? Or that McGuinness, a former IRA commander, would meet the Queen, head of the state against which he and his colleagues once waged such a bloody war? Or that Adams would meet Prince Charles, whose great-uncle, Lord Mountbatten, was assassinated by the IRA?

All those events occurred before the advent of Brexit – an issue so potent it has upended traditional party allegiances, created the strangest bedfellows, and made it foolish entirely to rule out any eventuality. l

This article appears in the 07 Mar 2018 issue of the New Statesman, The new cold war