When Martin* gets to work at 6:30 in the morning, there isn’t much time to stand around and talk. The 37-year-old postman starts his day at a sorting office in the Midlands, where walking back and forth to sort the mail means chatting is limited to “banter”.

“You could get yourself involved in a serious conversation and then two minutes later you have to walk to the other side of the sorting office so you can’t continue,” he explains. Once he’s begun his four-hour long route delivering post, the opportunity for a heart-to-heart completely disappears. But this hardly matters – because three or four times a week Martin goes online and gets instant access to the most intimate thoughts of 79,000 of his colleagues.

RoyalMailChat.co.uk is the unofficial online home of postal workers. There are 1,280 posts about dog bites, a 29-page thread complaining about The Sun releasing a heavy 24-page supplement (“like carrying a coffin to yer own grave”), and an abundance of calls to ban low-level letterboxes (repeatedly bending down causes back strain). There is even a definitive answer as to why some posties wear shorts during snowstorms: “Shorts because legs dry. Trousers don’t.”

“Any problems that anyone may have, we can help and we’ve got a great community effect going on,” says Liam Nam, the 49-year-old founder of the forum, who has worked for Royal Mail since September 1997.

“I think sites like mine are important for workers, especially in the current climate with the way jobs are: mass part-time and zero-hours contracts and cuts, cuts, cuts.”

Like most internet forums, posters on Royal Mail Chat (RMC) have their own acronyms. “DO” is delivery office, while “LSM” is the letter sorting machine. Those cards you get when you miss your parcel are 739s. But one piece of shorthand is more surprising than the others. “B&H” is shorthand for “bullying and harassment.”

In 2015, Royal Mail Chat’s Facebook page was shut down. “I can’t be associated with someone getting the sack so it had to go,” says Liam now. Royal Mail has strict policies about how its workers behave on social media, and Liam says two colleagues were suspended for posts they made on RMC’s companion Facebook group, so he deleted it.

“There are risks to both you and Royal Mail if you use social media inappropriately,” read Royal Mail’s employment policies from August 2017, citing the potential for “serious damage to Royal Mail’s reputation, brand and business”. Some of the rules employees must obey include: not using the Royal Mail brand name or logo in their social media profiles, not taking images or videos of any Royal Mail Group sites, and “regularly” checking their privacy settings. “You have a responsibility to ensure you don’t damage the company through your online activities,” reads the guide.

“There is a certain amount of anonymity here which I like,” Liam says of the forum, although he explains that he does regularly remind users of Royal Mail’s online policy to prevent anyone getting into trouble. The forum has been running for 12 years, and Royal Mail’s rules go some way to explaining why this slightly archaic form of online communication remains so popular with postmen. On a forum, tens of thousands of postal workers can talk freely under the cloak of anonymity.

“There is a deep rooted problem with Royal Mail management especially since we were privatised,” Liam claims. “Due to cuts and pressure on profit, workers are intimidated and bullied to finish their work – especially new starters. It’s horrible to read but we do our best to help them.”

Jason* is a 31 year old from Yorkshire who has been a postman for just under six years. “A great many times the forum has helped me with issues I have faced,” he says. “A main one is the perpetual nature of bullying and harassment by managers within Royal Mail, which is endemic.” Jason explains that the forum has helped him find documented proof he can use to argue with difficult managers. For example, if he can’t deliver everything on his route (nicknamed “cutting off”), he can cite the “overrunning deliveries procedure” to ensure he isn’t unfairly punished or forced into overtime.

“I don’t think we’re a bunch of militant loons, we’re a bunch of posties who want to earn a decent living without the fear of being bullied or harassed by managers in the workplace,” says Liam. “This site has been a godsend for thousands of workers over the years.”

Eugene* is a 58-year-old postman from Dorset who joined RMC a year after a transfer meant his working hours were cut in half. “It was nice to know that there were other posties who had the same problems, and felt the same way,” he says. “RMC offers an outlet where you can basically let off steam without getting sacked.” Eugene says that like Jason, he used the site when managers lied about worker’s rights (he calls the lying “endemic”). On the day I first joined the forum, a postman started a thread about his manager, who was trying to overule his doctor’s note and get him back to work. Replies showed that multiple other people had also had the same problem in the past.

“The jokes and moaning are just background, the most important aspect is advice and information,” Eugene says. A quick glance through RMC shows that over the years, posts have helped people to secure better hours, get compensation for dog bites, and convince managers to allocate extra trousers. In severe weather conditions, RMC advises postal workers on their rights when managers insist they carry on as normal.

“You have to be careful because you can be identified, and sanctioned, if management recognise your posts, which is why we all tend to very vague and not too specific,” says Eugene. Because of this, there is a persistent fear that Royal Mail moles are watching the forum. Two postmen declined to speak with me for this piece for fear of being reprimanded. “I have looked at certain posters and wondered if they are some kind of a plant/shill for management,” writes one user on the site.

Sometimes, knowledge is just knowledge. For an outsider, RMC’s 777,000 posts are a fascinating insight into the life of a postman – and an education on what we do wrong as customers.

A post that has been running for 11 years, “What type of customers annoy you most”, is informative. You shouldn’t stop your post-person in the street and ask them to look in their bag for your stuff, and they’ve heard the “hope it’s not bills” joke a fair few times before. Instead of opening the door, some people stand behind and it snatch the post as it is pushed through the letterbox (don’t), while teenagers shout across the street: “Is your name Pat?” 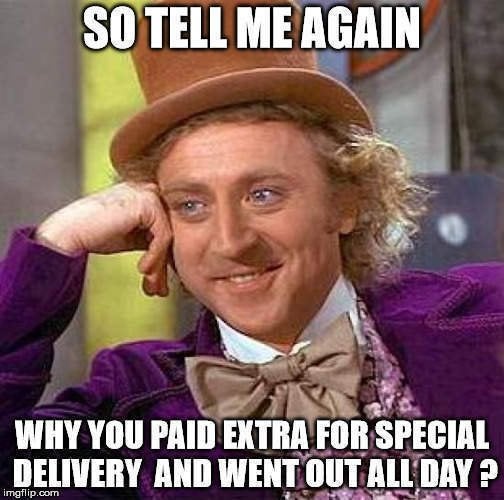 Threads for new-starters are also eye-opening for non-posties. Martin from the Midlands enjoys helping those who are new to the job via the forum.

“It’s really helpful because you don’t get shown and don’t get told everything from the management,” he says. “It’s a lot more necessary than it was 10 years ago, when the job was a lot easier than it is now.”

In December 2017, a new starter asked RMC for advice. They were told that their legs and feet would struggle at first, and to always wear a hat with a peak (the hoods on the allocated uniform are apparently “infamous for continually blowing off in the wind”), and to keep their toenails trimmed.

On another thread, “AND A FUNNY THING HAPPEND TO ME WAS______”, postal workers tell their most amusing anecdotes about the life of a postie. There’s the old lady that gives satsumas instead of proper Christmas tips, plenty of customers who open the door half-clothed, and the man who refused a Domino’s voucher because his name was not, he insisted, “Mr Pizza Lover”.

The stories are great – but some of them may be just that. A thread entitled “SEXY, desperate, housewives…” allows postmen and women to share encounters with customers who invite them inside. Alongside the too-good-to-be-true tales are posts expressing disappointment. “I did get asked into a home once, she lulled me in…” reads one, “only to end up fixing her cooker.”

In many ways, Royal Mail Chat is an unofficial social network for post-people. It isn’t a secret – many of the posties I spoke to stumbled upon it with a quick Google – but it is secretive. The strict rules implemented by Royal Mail mean that postal workers have stuck to forums while other online communites move to Facebook groups, Twitter accounts, or WhatsApp chats. Total anonymity allows the freedom to both improve working conditions and and make jokes about customers receiving packages shaped like sex toys.

For outsiders, the forum can help to shatter misconceptions. In a 2011 post about Postman Pat, a postie bemoans the show’s fantastical elements. “Having 5 houses to deliver to, having all the time in the world to talk to your neighbours, no manager pressure … allowing pets in the van, kids treating you with respect and admiration,” they write.

* All names have been changed