Five years ago, writing in the New Statesman’s centenary edition, the comedian Stewart Lee asked: “Where are all the right-wing stand-ups?” His op-ed, penned in response to a former BBC Radio 4 commissioning editor’s admission that she found it hard to book right-leaning acts to balance left-wingers, explored why right-wing material was more difficult to market to mainstream audiences. Comedians with right-wing views, Lee noted, are not that farfetched a concept – see Jim Davidson and Roy “Chubby” Brown – but acts such as theirs are less about politics than they are about political correctness.

Channelling Chris Rock, Lee suggested that the reason for the left’s dominance of the comedy scene was because “stand-up comedy should always be punching upwards. It’s a heroic little struggle. You can’t be a right-wing clown without some character caveat, some vulnerability, some obvious flaw. You’re on the right. You’ve already won. You have no tragedy. You’re punching down.” His fellow progressive comedian Nish Kumar, performing on Live at the Apollo in November 2015, seemed to agree. “This is the best I could come up with for right-wing comedy – hey, don’t you just hate it when you start earning over £100,000 a year and you move up an income tax bracket? See, it doesn’t work.”

And yet, fast-forward to 2018, and the comedy circuit seems to be becoming more of a broad church. While lefties like Lee and Kumar remain hugely popular, the increasingly charged nature of politics has created a situation in which fewer acts, and even fewer audience members, are willing to sit on their hands. This has, in turn, opened up an avenue for a new breed of right-wing comics speaking to audiences willing to listen, even if they don’t agree.

Shows such as Geoff Norcott’s Right Leaning but Well Meaning­ – an attempt to paint the Conservative Party as more compassionate – and Leo Kearse’s I can make you Tory – a numbers-driven defence of capitalism – are two of the flag-bearers of the recent right-wing comedy boom.

Norcott appeared on BBC’s Question Time last year and styles himself as a “prototypical working-class Tory”. He says he made the decision to perform outwardly right-wing material following a conversation with his wife. “I had been enjoying the weekend club gigs, but I wanted to challenge myself and do something different. My wife pointed out that me voting Tory was a bit different so I went with that.”

Norcott grew up with a trade unionist father and a mother who once stood to be a Liberal Democrat councillor. He explains: “At home, I was like a political Billy Elliot, hiding my copy of the Telegraph inside the Socialist Worker. But seriously, we talked politics all the time. The idea that if someone disagrees with you then you should block them out has never made sense to me. It’s never been in my interest to not hear someone else’s point of view and I’ve worked hard not to create my own echo chamber. When it comes to performing right-wing comedy, I’ve got to say that there is nothing better than someone folding their arms at the start of a show before laughing later on. A reluctant laugh is a beautiful thing.” 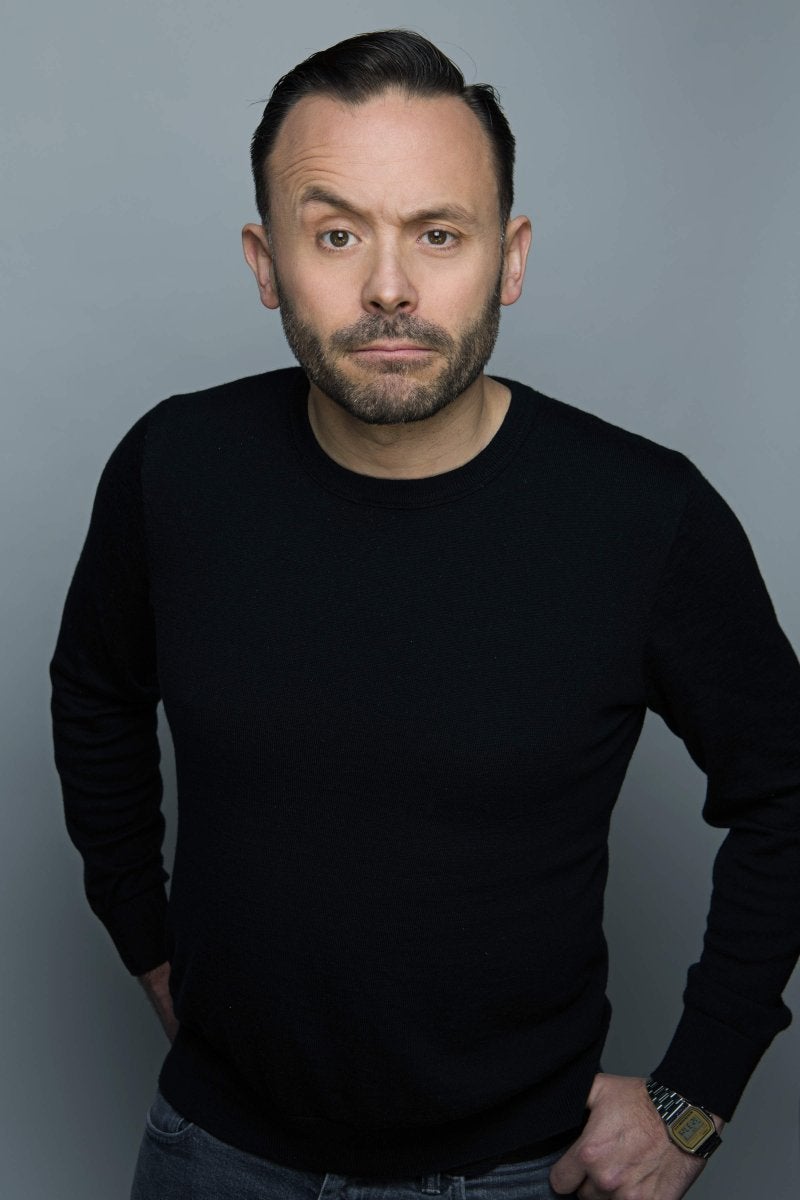 The political right is often accused of racism, sexism and homophobia, so isn’t it reasonable to expect right-wing comedy to be full of racist, sexist and homophobic punchlines? Norcott retorts: “I think some people on the left are prone to a towering moral pomposity. Many left-wing people assume that people on the left are automatically going to be open-minded and tolerant purely because they are left-wing. It’s a really infantile, pantomime reading of political views. There are plenty of racist, sexist and homophobic left-wing people.”

While right-wing comedy may not have supplanted political acts from the other side of the spectrum, it is being excepted as part of the mix by gig organisers. Pint-sized Geordie comic and resident compere of the Good Ship Comedy club in Camden, Ben Van der Velde, is left-wing but doesn’t disagree with Norcott’s assessment. Norcott, in fact, is one of the acts Van der Velde has booked for the venue. “And that was very interesting,” he says with both eyebrows raised. “As with anything, you’ve got to appreciate a diversity of opinion. Of course comedy follows that. One person’s suffering-in-work poor is another person’s useless layabout.

“Tories are quick to point out that they’re not all sexist, racist or whatever. Is it wrong for the left to associate these things exclusively with the right when plenty of left-wing people are these things as well? I think that on the left we are all too ready to stereotype and pigeon-hole people on the right for their intolerance, because the swing from right-wing with a small ‘r’ to right-wing with a big ‘R’ seems an easy leap.”

Among the most prominent left-wing comics with a big profile is the Scotsman Frankie Boyle, who not only regularly turns his guns on the right, but also writes for the Guardian. But while Scotland itself might have a reputation for leaning left, not all of Boyle’s compatriots come at comedy from the same ideological angle.

Leo Kearse is a Scot who won the UK’s Pun Championship in 2015, and has been touring a show called I can make you Tory – a statitstics-led set written to provoke. For Kearse, the decision to perform from a right-wing perspective came from a frustration with what he dubs “super-sanctimony”. He suggests that the steady rise in the popularity of right-wing comics is the result of “a rejection of the hyper-liberal consensus” and adds that “dogmatism” characterises Jeremy Corbyn’s leadership of the Labour Party.

“Basically everyone was so smug and so pious on social media. All these liberal comedians and journalists were perpetuating a culture in which nothing can be criticised. It was getting to me. You weren’t able to point out obvious things like the fact capitalism has delivered a world of immense wealth and efficiency, lifting millions of people out of poverty.”

Kearse’s observation about the supposed sanctimony of the left is not uncontentious, something he is obviously aware of. “You’re looking at me like I’m David Icke or something,” he says of my response to his statement. “I think the left is willing to ignore obvious benefits of capitalism. Look at the Google data observatory. They’ve got World Health Organisation data going back decades and you can see, by country, how living standards and life expectancy and the amount of wealth people have, have improved under capitalism.”

Whether or not we accept Kaerse’s insistence that right-wing comedy is simply a franker form of satire and that its left-wing equivalent is over-senstive, the key questions remain around whether jokes about tax, the benefits of nuclear power, small states or the failings of communism are actually that funny.

Van der Velde, who insists he always tries to book across the political spectrum at Good Ship Comedy, says it all depends on the individual. “Speaking as a comedian, I think there are certainly right-wing comics you can admire for their performance skill even if you don’t agree with their politics. Some, like Chubby Brown, are undeniably good with their rhythm, pace and delivery. When he’s writing jokes that are just daft one-liners – he has a great one about a hedgehog and a toilet brush – rather than focusing on sexual, racial or ethnic stereotypes, they’re often really good.

“Some right-wing comics, however, also rely on using disgusting racial and gender shorthand, which isn’t even about punching down. It’s joking with hate and contempt. There are some right-wing comics who don’t want to be liked by the audience as part of their persona, and they use self-deprecation as an interesting technique, and you know there’s a playful creativity and they’ll reflect back on themselves.” Would Van der Velde describe Bernard Manning as a right-wing comedian? “No, I’d describe him as a racist. Manning very rarely self-reflected and didn’t take the piss out of white, working-class northerners.”

Norcott’s Right Leaning but Well Meaning was given a damning one-star review by The List last year, but he was also described as “at the loveable end of the Conservative spectrum” by the Guardian for his other show Conswervative. When he performed on Live at the Apollo, he received loud cheers and no heckles from what he says he assumes “was a mostly liberal crowd”.

The mixed reaction Norcott has experienced with his material, he says, is clear evidence that “every crowd has a mix of opinions and that’s how it should be”.

He adds: “I think if you’re left-wing but you’ve come to see one of my shows because you’re curious then you’re probably my kind of person. But yeah of course I have had people boo and heckle as well.”

Kearse, meanwhile, received four stars from The List, but Chortle criticised him for hyperbolising the United Kingdom’s centre-left opposition.

It’s difficult to talk about political comedy, or indeed anything in the UK at present, without discussing what Van der Velde says is the “elephant in every room” – Brexit. While not a strictly left versus right stand-off, as the Leave-voting Norcott and Remainer Kearse (“for economic reasons”) prove, it does seem fair to say that Euroscepticism edges more towards the right than the left on the whole. It was the Conservative Party, after all, that called the referendum on membership in the first place.

Van der Velde thinks that “the conversation around immigration and race has put Brexit front and centre of many comedy sets now”. Is Brexit a catalyst for more right-wing comedy? Norcott says: “The fascinating thing about Brexit is that the comedy scene is probably institutionally left but Brexit cuts across that axis. Fifty-two per cent of voters opted to leave the EU… I’m sure there would have been plenty of punters unconvinced by the idea that there isn’t a single Brexit-voting comedian. The vote was a fairly even split but on panel shows voting Remain was made out to be orthodoxy. It’s like the marmite debate, but suddenly everybody loves marmite and the people who don’t are idiots who just didn’t do enough research on yeast extracts. So I think we can expect more openly pro-Brexit comedians with time, yes.” And what about more openly right-wing comedians? Norcott stresses: “Personally, I’d be careful not to equate the two.”

Ultimately, it seems, what will push forward or stunt the progress of a right-wing comedian in the future will be their ability to temper charges of guilt by association. Whether relating to unsavoury aspects of the Leave movement or the misdemeanours of those they vote for but have no control over, it’ll be this that determines by how much they can loosen the left’s grip on the industry. Norcott says: “Voting Tory isn’t a blanket endorsement for every other person that happens to vote Tory too.”

It’s a separation that Van der Velde advises should be applied to both sides. “It’s very easy for the left to see the absurdity of being anti-immigration and being stuck in a delusion about 19th century glory, but equally the left is in an eating its own tail disarray sometimes. We also need to separate the idea of leftism in terms of social justice and in terms of sanctimonious people who are far too sensitive. We need to separate the idea of people who like the pragmatism and the conserving nature of conservatism from people who are genuinely racist or hateful.”