Q. Is America great again, yet?

A.  It’s so, so much greater than it was ten months ago, unbelievably greater. I ask people that all the time, around the White House, at the fantastic Trump properties I visit, at my rallies, real people, real Americans, the staff at Mar-a-Lago, so many immigrants, probably all very legal, so proud of me and what we’re doing. And you know what? Everybody agrees.

Q. Exactly how much greater is America since you started making it great again? Could you put a number on it?

A. I’m a numbers guy, I love numbers, I’m one of the great businessmen, business is all about numbers, plus in my case toughness and a sixth sense about the future, so sure – I’d estimate 100 per cent greater, probably at least 100 per cent, could be much more.

Q. At what point do you say, “OK, it’s great now, America is back to being great”? And what do you do at that point?

A. Great question, excellent question, such a better question than the media in America ever ask me. But the honest answer is that the people will tell me, I won’t tell them: “President Trump,” they’ll say, “you did it, America is great again, you’re like a magician, like a superhero.” And at that point we’ll keep going, and make America greater than it has ever been, OK? That’s our next slogan: MAKE AMERICA PERFECT AGAIN

A. Hold on – that woman wasn’t really the actual attorney general, she was just the fill-in because the obstructionist Democrats took so long to confirm Jeff Sessions –which, as I told a couple of the Democrat leaders later, maybe I wish they hadn’t confirmed him – but anyway, the one I fired was like a substitute teacher, like an office temp.

Q. …. the Director of the FBI, your Chief of Staff and Deputy Chief of Staff, two Communications Directors, your Press Director, your Chief Strategist, National Security Advisor, your Secretary of Health, and several others have all gone within the first year. Are you the best president ever at firing people? What’s the secret?

A. I have this incredible sense of when somebody has outlived their usefulness. The secret is being tough and decisive, as everyone saw me being for 15 seasons on the incredible #1 hit shows Apprentice and Celebrity Apprentice. Firing people is what Trump does, right? Those were reality shows. That’s what the people voted for, why I won in a landslide among the legal voters.

Q. How many people would you say have betrayed you since becoming president? Are you keeping a list?

A. Great question. Fantastic question. One of the best questions. But we don’t know the answer yet, do we? I mean, there are these showboating Republican Senators, the losers who only have the guts to attack Trump when they’re headed out, dead men walking, and there’s this terrible Greek kid Rope-a-dope-alous or whatever who’s  so scared of jail he’ll say anything, lied to the FBI, I’m sure now lying to Mueller about me. But in our country, by the way, it’s not illegal for a president to keep an Enemies List, even though people think it is because of Nixon.

Q. Are you completely sure this conversation isn’t being wiretapped?

A. Are you trying to get me to say Obama is still wiretapping me? Because I’m not falling for that. Even if it’s true and even if he still has the help of MI5, MI6, all your MIs, the ones who helped him before.

A. I can’t go into that, very, very top secret, the most top secret, – that’s why they call it “the Secret Service,” right? Did you know that Harry Houdini, the greatest magician ever, back when the great American magicians did real magic, actually escaped from anything, made elephants appear and disappear, did you know Houdini worked for the Secret Service? I hear that’s definitely true.

Q. Let’s talk about China. What’s the best kind of china to have your people serve you KFC on?

A. Is that a joke, some kind of English joke? And by the way, give me the name of one global retail business based in England? You can’t. Arthur Treacher’s Fish and Chips? Gone. Even your Jaguars are, like, so bad now.

Q. You’ve threatened North Korea with “fire and fury like the world has never seen”. Do you think it’s possible to conduct a nuclear war against a country that is smaller than the state of New York without also starting a war with its immediate neighbours?

A. You say “conduct a nuclear war.” But the nuclear, as terrible as it is, the beauty of it is that if you’re us, we’ve got thousands of nukes, you drop like a dozen on North Korea, and it’s over as soon as it starts. And you do it on a day without wind, a zero wind day, that’s what my son Barron suggested, brilliant kid, so the radiation doesn’t blow around to South Korea or over to Japan. And China, trust me, China would be very happy to have North Korea gone – I joked with Xi about that, we talked about how North Korea is like communist China’s crazy first wife they’re still married to and paying for and a divorce would be so rough and expensive.

Also, you say New York state, but have you ever travelled around, it’s tremendous, huge, you could drop a nuke on Buffalo and back east in Manhattan, nothing, don’t hear it, don’t see it, no radiation, no problem whatsoever. And I mention Buffalo because, many people don’t realise this, it’s suddenly completely filled with Muslims.

Q. What kind of décor do you have in the room with the nuclear launch button? Is there anything else in there to help you make the right decision, when the time comes?

A. You know what? I found out there actually is no button. Big disappointment. Just like there’s no red phone I can use to talk to Putin. So many things about being president are like that, everybody thinks it’s like in a movie, the president can do anything, keep the Muslims out, tell the FBI who to arrest, whatever, but no. In lots of ways I was more powerful when I was a CEO, did whatever I wanted, fired whoever I wanted for any reason. 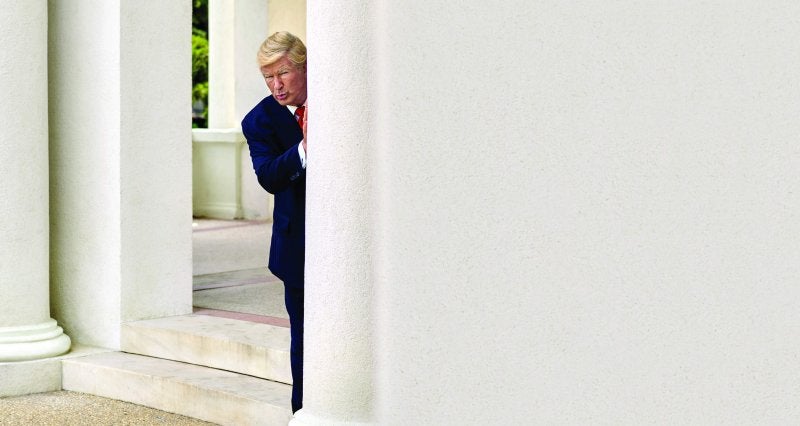 The US and the UK

Q. What was Theresa May’s reaction when you held her hand? Did you ask first, or did you just grab her by the hand?

A. Loved it! I could tell, trust me. I could actually feel her pulse go up… I’m very good at that, knowing what people want, even when they don’t realise yet they want it, especially the women.

Q. What kind of a trade deal would you like to do with the UK?

A. A perfect trade deal, better than when you were part of quote “Europe,” unquote, great deal for us, great for you, you buy our fantastic airplanes and machinery, we buy your Stella McCartney shoes and U2 albums and so forth.

Q. You once told Howard Stern you “could have nailed” Princess Diana. Would that have made you our future King?

A. She was so lovely, and I was single for a couple of years when she and Prince Charles weren’t doing so great, and she frankly really liked Trump a lot. I mean, a lot. But I hear she could also be a piece of work. And also, she’d be very old. Like, so old.

Q. You’ve threatened to deport huge numbers of immigrants and to ban people from entering the US based on what country they’re from. How can you be sure that among the millions of people affected by such policies there isn’t a potential Miss Universe– or even a future Mrs Trump?

A. You think you’re so funny. You know we won a lawsuit against an English newspaper after they said untrue things about the First Lady’s working life, right? So this English snarky thing is, like, not a good idea. Trust me.

Q. You’ve said that “putting a wife to work is a very dangerous thing”; do you worry that Melania is doing too much “work” as FLOTUS?

A. The work they do as First Lady isn’t really work, you know. It’s like being a royal whatever — look nice, show up, have some kids, which is perfect, and how a lot more wives should be, in my opinion, like a First Lady isn’t boss of anything, don’t make important decisions. Except in Hillary’s case, and that was a disaster, for America and apparently for her marriage. 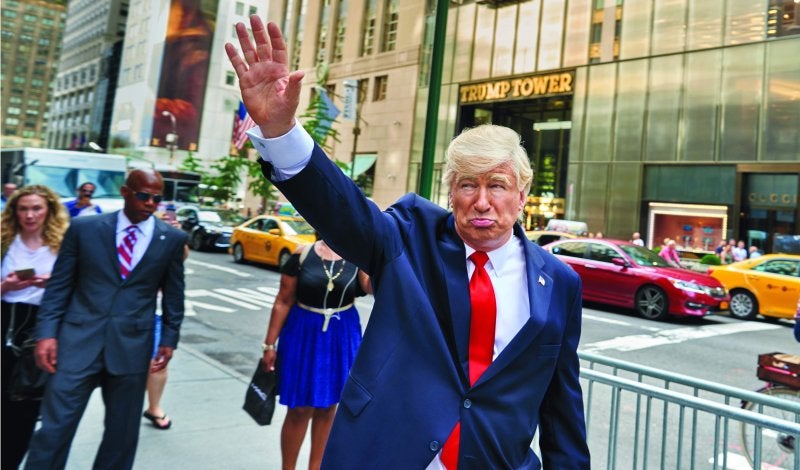 Q. You’ve talked about asking “Bill Gates about… closing that Internet up”. Which parts of the internet should be closed?

A. Well, for starters, the Isis and radical Islamic terrorism parts, okay? And the fake news parts – not all of the fake news parts, I understand that’s impossible, not even China can do it, but the most damaging fake news parts.  I’m going to name a very important commission to study how to do that.

Q. Where do you compose your greatest tweets?

A. Probably in bed, from around 3:30 am to dawn. My CIA guy tells me I’m in what they call “the 3:30 club,” with Stalin, Pinochet, other historic tough leaders, up super-early, before their enemies, organizing. At 3:30, I’m alone and my mind is very, very clear. But that’s also a hard question. You know why? Because I’m not sure which tweets are the greatest.  I haven’t done the ranking yet because being president keeps me so incredibly busy, unbelievably busy, you wouldn’t even believe how amazingly busy. In fact, I have to go be presidential right now. Cheerio.

You Can’t Spell America Without Me: The Really Tremendous Inside Story of My Fantastic First Year as President Donald J. Trump (A So-Called Parody)by Alec Baldwin and Kurt Andersen, published by Penguin Random House, is on sale now.