What comes to mind when you think of Rubens? On Christmas Day 1952, Edmund Wilson, the great panjandrum of American letters, was holding forth on his sofa. The alcoholic American poet Theodore Roethke sat down next to him, watching attentively as he spoke. When Wilson stopped, Roethke leaned forward and took one of Wilson’s substantial jowls in his hand. “What’s this?” he asked. “Blubber?”

Blubber. Flesh. Cellulite. Dimples. The wide-screen pelvis. The überwench. That is what Rubens is famous for. In this exhausting exhibition at the Royal Academy, there is a copy by Jan Boeckhorst of Rubens’s Fall of the Damned. It is much reduced in size and, the catalogue tells us, the thermonuclear chain of nude bodies “more slender”. It still resembles the meat vitrine in Berlin’s KaDeWe, a damnation of sausages, salami, bockwurst, boiling rings, blood puddings. The original (in the Alte Pinakothek) must be even more of a shambles – bloodier, bigger cuts. Back then, size mattered.

Tastes have changed. We incline to economy of means. In Browning’s poem “Any Wife to Any Husband”, we read: “That is a portrait of me on the wall —/Three lines, my face comes at so slight a call”. That gives you the contemporary preference for deli­cacy rather than overkill. Damien Hirst, disguised in a beanie, was briefly at the press show, and it struck me that he is the contemporary Rubens, with his diamond-encrusted skull and his black sun made from thousands of dead flies. A bigger flash. All the same, we find room for Lucian Freud, whose brushwork is turgid with pigment. There is a great Freud on show here in a room curated by the marvellously talented Jenny Saville. It’s an extra – on the theme of flesh – which reveals that the organisers share the vulgar idea of Rubens. Rubens as the highbrow Donald McGill, of seaside postcard fame. 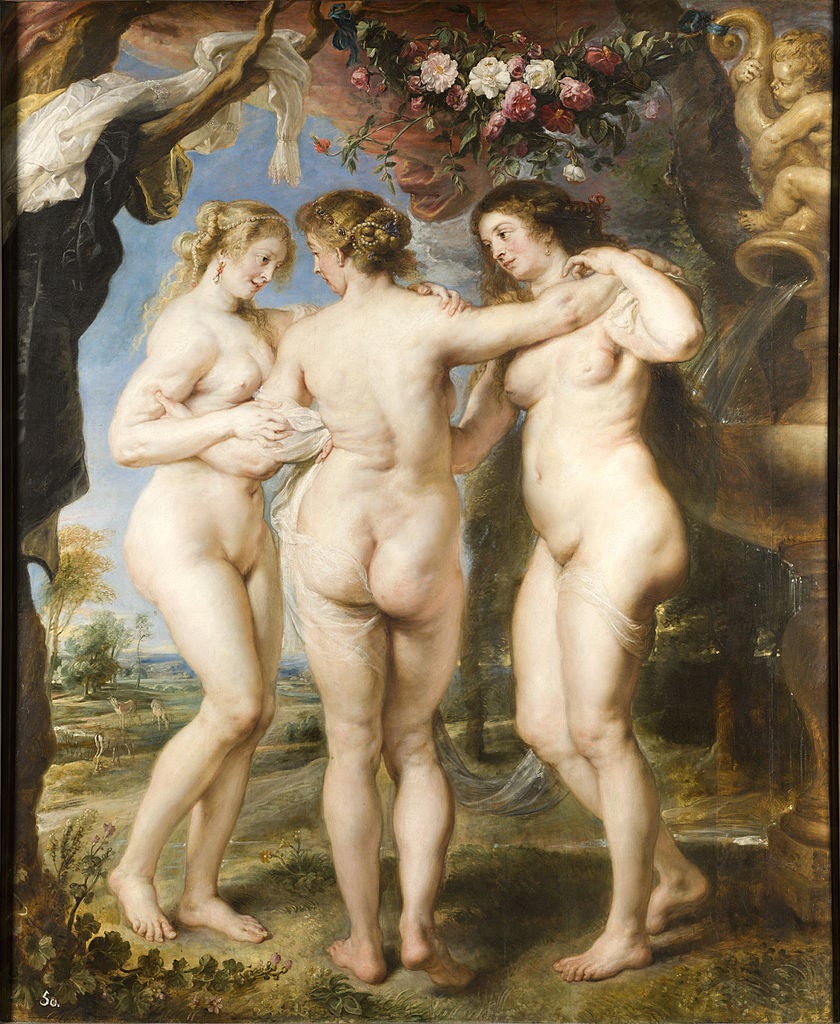 In the Saville room, there is Lucian Freud’s Naked Portrait II (1980-81). It presents a nude pregnant woman asleep on a drab, dun Chesterfield sofa whose folds and flesh tones are picked up in the body’s belly button, nipples, plump cushions of breast and the pleats of her pudendum. And there is a great joke about nudity – the rough black horsehair sofa interior suddenly inside-out in the pubic hair. Here is also the famously mordant Sarah Lucas installation of the female body, with its complete refusal of the romantic and the sexual. Instead, a bleak acknowledgement of appetite – two fried eggs for breasts; for the vulva, an open pod of pitta bread filled with brown slices of doner kebab. The grey-white onions represent semen. It has the blank detachment and force of Beckett at his most affectless – the comic anomie of the kind when he asks (hilariously) in Molloy, “But is it true love, in the rectum?” (Molloy is unable to remember which orifice he lost his virginity to.)

Saville herself contributes a terrific painting that mirrors and eclipses Willem de Kooning’s untitled picture opposite. It seems to be of a mass grave, a pile of body parts, in black and white, with a bit of blood. A wonderfully coherent chaos. At the top: two severed heads with names underneath, neither quite legible, but which may be Polish. The heads are contained in an oblong, a bit like the photographs you sometimes see in European cemeteries. So the painting is “commemorative” and bloodily actual.

This Rubens show is an exercise in rehabilitation. We are being invited to see him in his context and his aftermath. So his Landscape with a Boar Hunt (c.1617-20) is hung next to Delacroix’s Landscape with a Boar Hunt (1839), then Delacroix’s Lion Hunt (1858) and Landseer’s graphic and effectively gruesome Hunting of Chevy Chase (c.1825-26), with its plausibly vicious dogs. Landseer can paint a convulsion of canines.

This chain is followed by James Ward’s Bulls Fighting, with a View of St Donat’s Castle, Glamorganshire (1803). By now the connection is slight – another example of hunting in a landscape. (There isn’t a great deal of indoor hunting.) The implicit argument is that, if Rubens can be shown to have artistic progeny, he must be a great artist, underwritten by his talented successors.

The problem with Rubens is repetition. It also accounts for his amazing productivity, given that he was a diplomat as well as a painter. Every horse in those hunting pictures has two raised front fetlocks. There isn’t a single one with four feet on the ground. This was long before Eadweard Muybridge demonstrated photographically how horses actually move. The convention is the rearing horse. So what the viewer sees, time and again, is the horse poised like some poncey pianist about to attack a rapid run of arpeggios. In Conversion of Saul, Adam Elsheimer’s great oil-on-copper miniature (c.1604) of Paul on the road to Damascus, the visitation of the angry God is painted as a terror of horses. It is a completely original conception. At the absolute pictorial centre, Saul’s horse is bucking – not rearing in the clichéd fashion. There is another horse on its back. In the right foreground, a further horse squats down, flinches, while someone controls its head. It is a tiny, thoughtful masterpiece and the opposite in every way of Rubens’s bombast. Picasso hated Rubens. He explained to his dealer, Kahnweiler, why the latter had been disappointed by a Rubens exhibition:

“He’s gifted, but what is the use of gifts that are merely used to produce bad stuff? Nothing is described in Rubens. It’s simply journalism or historical films . . . Everything is the same. He thinks he can paint a large breast by doing this [a circle in the air] but it isn’t a breast. Draperies are like breasts with him, everything’s the same.”

Everything is the same – same fetlocks, same flesh, same rhubarb fool. A formula in generous helpings. As Updike once pointed out, even women’s behinds are very different: one having a ‘kind of glassy texture’ while another has ‘a touch of fine, fine sandpaper’. The painter must paint what is there, not what he has seen on the easel in the studio.

Tiger, Lion and Leopard Hunt (c.1617) is the poster for this show and it is pure Hollywood hokum, large and ludicrous: an authentic fake. Computer-generated images avant la lettre, a painting almost completely removed from realism. (Almost. I was amazed to notice that Rubens had painted the arsehole of the back-kicking horse on the left, as well as the balls on the grey.) Not counting the horses, there are five full-grown animals – two lions, two tigers and one leopard – plus two tiger cubs, one a limp slump in its mother’s mouth. All being slaughtered simultaneously. The picture is a kind of pornography, impossible in its gratifications. The whole thing is so hyper, so ADHD, you think Rubens might need a tab of Ritalin. It recalls the title of Elizabeth Bishop’s poem “Large Bad Picture”. Compositionally, it is wallpaper, claustrophobic, suffocating from lack of empty space. There is a preparatory oil sketch (c.1621) of the Lion Hunt that benefits from the empty foreground. Painting needs space, otherwise it’s like reading German Gothic script – not impossible, but awkward and cramped.

It is a great pity the exhibition doesn’t include more drawings. For example, there is a very fine one, full of implication, in black and red chalk, called Young Man Embracing a Young Woman. The man is drawn in some detail. The woman is an empty outline. She looks unfinished, yet that is an alibi. She is nude. Her mouth is open, somewhere between studious and vacant – concentrated. His right hand is around her shoulder. His left is half invisible, the fingertips out of sight. He is feeling her front with his left hand. Fully clothed, with a hat, he lives in the look on his face – calculating, assessing her reaction – while she is working out what exactly she feels. It is all in his eyes and her parted lips.

This little drawing of genius turns out to be a preparatory sketch for a huge oil painting, The Garden of Love (c.1635) – the now fully clothed couple blandly exchanging pleasantries in the left foreground. This picture depicts a highly finished group of couples, dressed and decorous. Top right there is a fountain where water spews from the mouth of a catfish and is vigorously expressed from the marble nipples of a female figure. There is a certain amount of groping, an innuendo of petting in the muzzy background. All the honesty and interest of the drawing has been displaced and downgraded.

There are three other drawings worth anyone’s attention. Seated Young Man (before 1635) is in black and red chalks. The face is absolutely individual, not at all standard: you could mistake him for a young André Previn. His right hand is to his heart, pleading, and the image is drawn from a very unusual angle. He is wearing knee breeches and hose, with beautifully crossed ankles and brilliantly drawn shoes, tied with ribbon. Young Woman Kneeling (again before 1635, black and red chalks) shows the sitter/kneeler looking over her left shoulder at us. The drawing is remarkable for the wonderful way Rubens has captured the crumple of her drapery, the stiffish texture of her dress. Then there is the swift rendition of the furbelow tied at the top of her arm. Lastly, there is Young Man Descending Stairs: you can see the sword under his cloak, his ribboned shoes, the tight contour lines of his straw hat, his hair touching the corner of one eye. He is recognisable, and more likely to take his place in the pages of Pepys’s diary than to go on a tiger hunt. 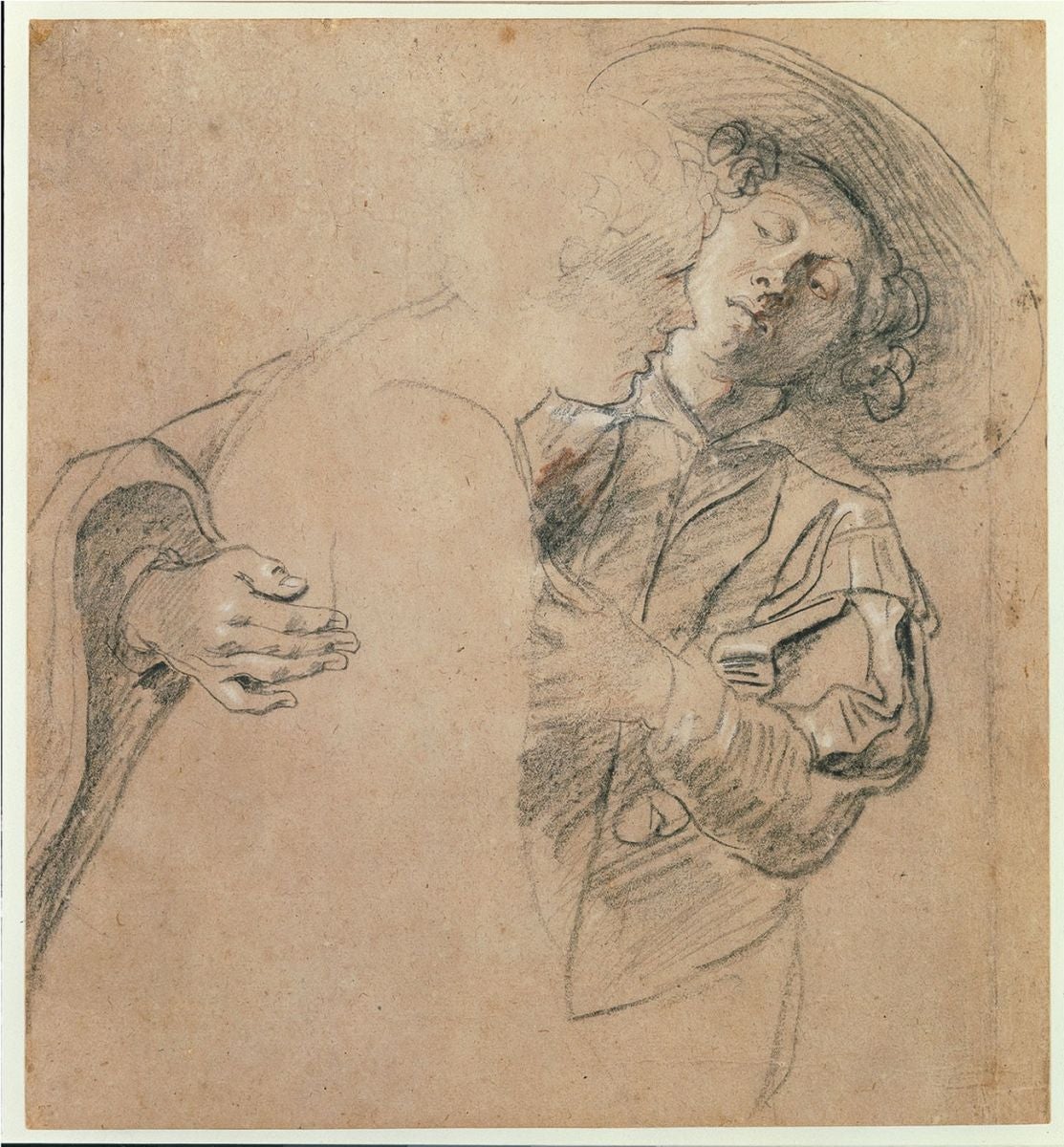 Are there any good paintings? Christ on the Straw (1617-18) shows Jesus brought down from the cross. His flesh is drained, grey as belly pork. His right nostril is thickly bleeding. The expression of Mary is a little overstated, but the slightly squeezed Mary Magdalene, wringing her hands, looks authentically stupid with grief. In the room called Elegance – the show is arranged thematically – there is a large oil of a woman of the Genoese aristocracy, Portrait of Maria Grimaldi and Dwarf (c.1606). Her head is like John the Baptist’s on a huge ruff the size of a sports stadium. Its spread is mimicked in her fan. Gold decoration spills down the front of her black velvet dress and around its hem. A dog jumps up: its face is parallel to that of the dwarf, which is brutal and menacing. He is holding back a drape, as if to expose something the painting isn’t explicit about. It is a rumour in the painting, in which the dog has a collar and the mistress a collar, both elaborate, while the dwarf has a loose white collar. It is difficult to know what Rubens intended, but perhaps it is enough to be so imperiously detained by the look on the dwarf’s face.

In Tom Wolfe’s The Right Stuff, the original astronauts, pissed off with being dismissed as “spam in the can”, add to the macho spare-time pursuits of the test pilots who preceded them. To “Flying & Drinking” they add “Drinking & . . . Driving & Balling”. Rubens paints a lot of this wrong stuff – roistering and riding and raping. You can have too much of it.