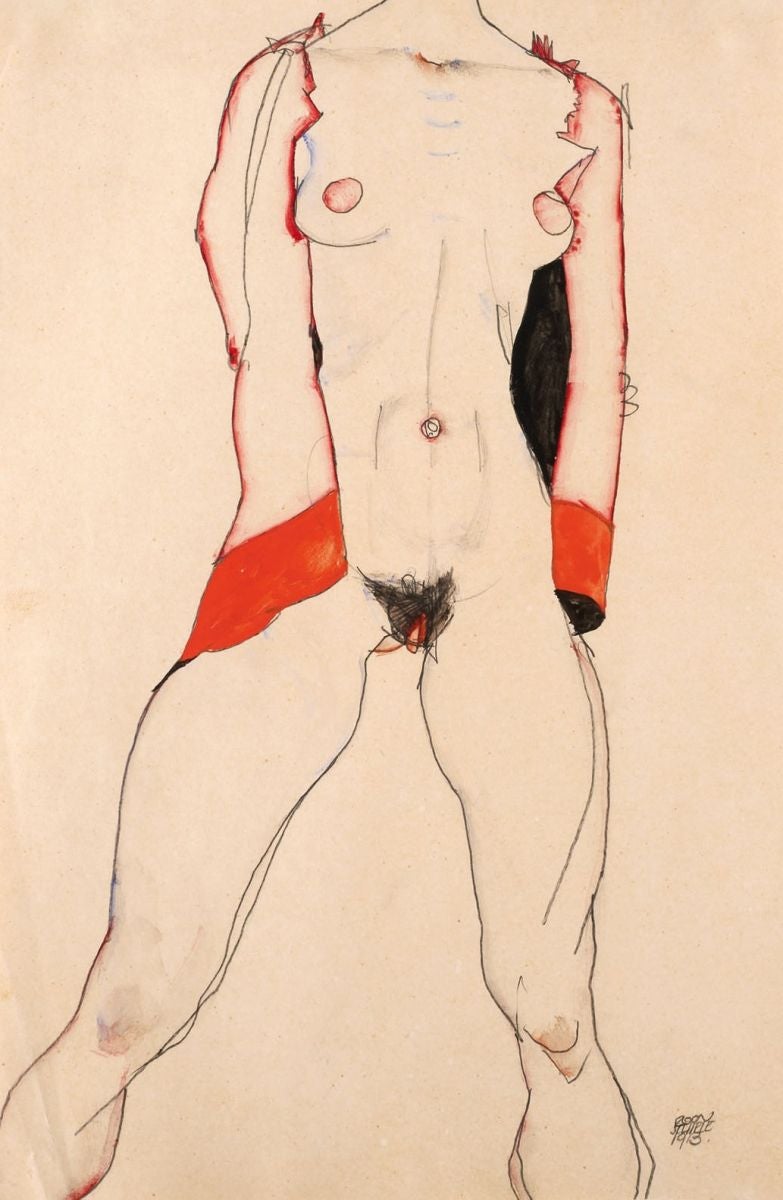 Sex and Schiele are synonymous, as Vienna is with venality. In Edmund de Waal’s The Hare with Amber Eyes, we read: “Sex is inescapable in Vienna. Prostitutes crowd the pavements. They advertise on the back ­pages of Die Neue Freie Presse. Everything and everyone is catered for.” The playwright Arthur Schnitzler confides in his journal that he has problems keeping up with the demands of his two mistresses. Ignace Ephrussi, a Jewish ancestor of de Waal, has affairs with his wife’s two sisters, plus a series of mistresses. Klimt is invoked. Schiele is invoked. Of course he is.

Is Schiele a pornographer? Of course he is. Does that mean his art isn’t art? Of course it doesn’t. It is a mystery that art and pornography are thought to be incompatible, a great either/or. Why not both?

Gordon Brown: “The solution to this crisis is still global”

Nudity isn’t necessarily pornographic, even if it is explicit. There is a 1917 oil by Schiele, Girl (the Virgin), which isn’t in “The Radical Nude”, the new exhibition of his work at the Courtauld in London. It is a brown study of nakedness. The girl stands facing us, four-square, sturdy, innocent and inexperienced, about as beguiling as someone at the swimming baths. We sense her sensible, burly, one-piece bathing suit just out of the picture. She is homely, wholesome and powerfully unarousing. Dull as dishwater, ordinary, unadorned, though not perhaps as sexually occluded as Bran­cusi’s great sculpture Torso of a Young Woman (1918) – which is a pseudo-pelvis, a short marble column, completely smooth, except for a brief, shallow groove to mark the theoretical divide of her closed legs. There is no point of entry, no ragged genitals, hardly even a mons. Compare these artefacts with Schiele’s more characteristic efforts and you see a step change.

John Updike has unnecessarily acquitted Schiele of the charge of pornography, on the grounds that his women are too gaunt and too ugly to be arousing. Julian Barnes, in a paroxysm of primness at the end of a piece about Lucian Freud’s nudes, claimed that Freud’s women are so mercilessly, so punitively exposed that it would be difficult to masturbate to them successfully. Really? Both writers seem to me to be lying about male interest in sexual fundamentals, in genitalia, and the role that obscenity and ugliness play in sexual excitement. Beauty isn’t a requirement and sometimes, like love, it can be a disadvantage. Look at Lucian Freud’s breathtaking and definitive Portrait Fragment (1971) and contemplate the undiluted sexual impulse. It is a painting of pure male desire in all its impurity. To the fore, a pair of open thighs and the indelicate, fundamental female thing in all its inextinguishable power. It is the business. The rest of the body – torso, breasts, the underside of the chin – is there but it’s beside the point.

There is very little Schiele in England – one drypoint etching in Birmingham and one in the V&A. So this exhibition is important. The 38 nudes on show at the Courtauld are deliberate provocations to desire – contorted, splayed, semi-clothed and often, therefore, candidly pornographic. The models display themselves to the painter and us “as to a midwife”, in the words of John Donne’s “To His Mistress Going to Bed”. In Guy de Maupassant’s great novel Bel Ami, Georges Duroy, undoing the clothes of the modest, morally muddled Madame Walter, with the nimble fingers of a maid, “left her boots on [and therefore her stockings] and carried her towards the bed”. However much we tell ourselves that sex is a straightforward activity, a healthy alternative to All-Bran, it turns out it isn’t. It’s dirtier, more difficult and profoundly absorbing. Well worth trying to paint.

Schiele had an eight-year career before he died of Spanish flu at 28. There are 6,000 drawings. How good is this porno-painting, how good is the art? Instantly recognisable, unmistakable, uncowed, courageous, striking, full of panache, with a genius for placing the image and for radical stylisation – but, in my judgement, inferior to his mentor, Klimt. Klimt has a greater range and a greater skill base. After two hours, a phrase came into my head: look, no hands. Not many feet either. And quite a few decapitations. The catalogue half-notices this tendency and vaguely relates it to the use of antique casts, the classic rubble in art schools – a typical art-historical move.

These amputations represent an artistic problem for Schiele. Hands are difficult for any artist. Dürer’s solution was to paint the hands on their own, so that they could upstage nothing. Modigliani found them an unmanageable distraction from the main composition and concealed them or morphed them into nondescript paddles. Schiele is a cleverer artist, adept at accommodation and compromise. His faces, for example, are often the minimalist faces you find in fashion plates – pinhole nostrils, simplifications, a kit, a routine – and he did do some fashion drawings. When you look at Schiele’s female faces, you confront a certain formulaic automatism, inoffensive and nearly invisible. There are, after all, other things to look at – pudenda, for one.

In Sneering Woman (Gertrude Schiele) of 1910, we find, as usual, many things to admire, touches that solicit the viewer’s attention almost peremptorily. His sister is wearing a huge dun hat. Nipples half-hidden, her breasts sag just above her folded arms and Schiele has caught brilliantly the way the line of one breast, the left, starts higher than the other. There is an overlap – an imperfection, an asymmetry so familiar it is moving. But it is the arms and the hands we need to look at, despite the distractions on offer – that sneer, those breasts, the great brown-paper gasometer of a hat. On the arms there is a lot of fussy pencil work to suggest hair or wrinkles or mass. It isn’t clear what Schiele intends. Neither hand is drawn particularly well. Both are fudge-brown with pencilled nails and knuckles – a fuss and fuzz of wrinkles. 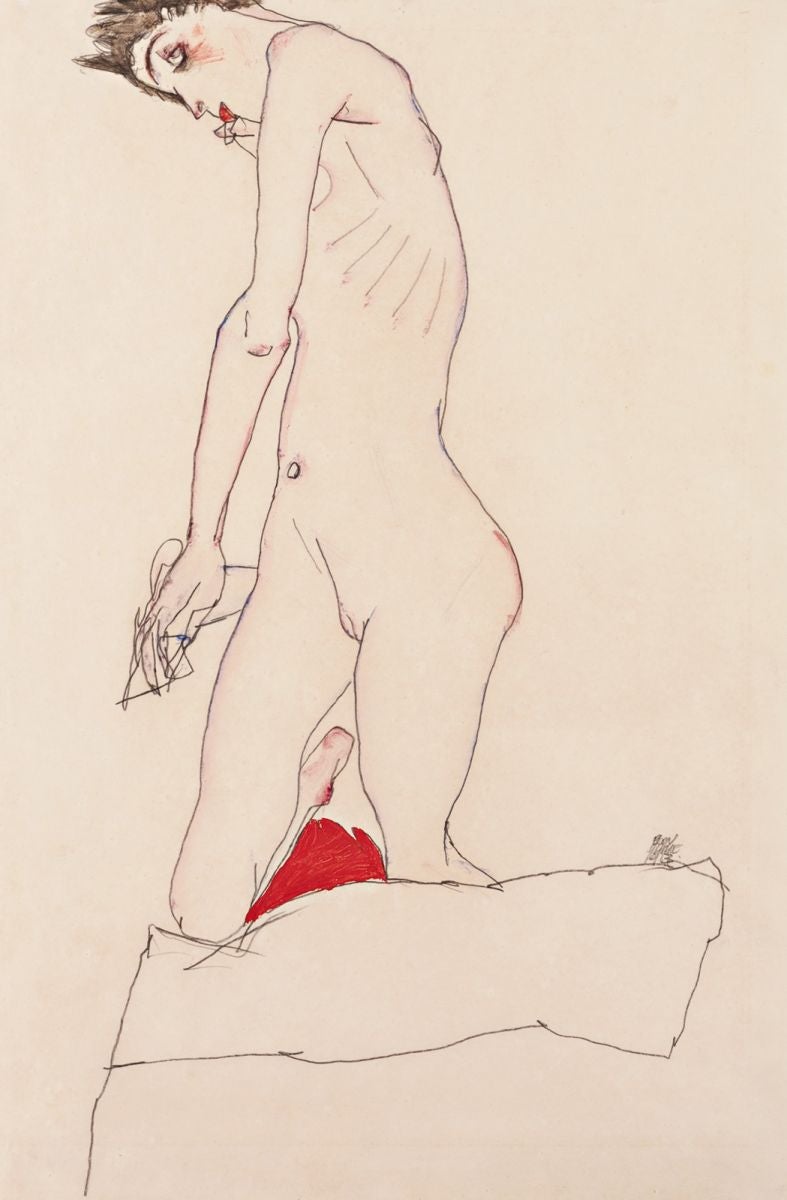 In Girl Kneeling on a Red Cushion (1913), the hands to the left are a blather of pencil, whereas the hairless fanny is beautifully secure in its drawing skills. Standing Nude in Red Jacket (1913) chooses a pink, divided jacket and a red, divided vulva. It omits all potential difficulty. No feet, no hands, no face. Better, Schiele had already calculated, to leave out the hands altogether. Or set up a pose in which, say, they are wrapped around the sitter’s body or head so that only the ­fingertips show.

These weren’t his only solutions to the hand job and its intractable artistic task. Even looking at only 38 paintings, you notice a repeated stylised hand – the reddish claw that he handed out to nearly everyone. It isn’t a hand with the hand’s attention-­seeking plethora of finicky detail; it is the sign for a hand. And he knew he mustn’t overuse it. So he evolved a marvellous strategy. He foregrounded the difficulty.

Suddenly there were pictures, mainly of male subjects – himself and the mime ­artist Erwin Dominik Osen – in which the real subject is Schiele’s struggle with the hand. These hands are enormous and ­elongated, candidly unrealistic in their realism (something that is partially explained by Osen’s profession). Each hand is like a marionette. After a time, it becomes clear that Schiele’s drawing is based on the studio skeleton, with its separate phalanges. He has done his homework, gone back to basics. Dem bones, dem dry bones – but whimsically coloured red, lavender and green.

Feet also present a difficulty. Male Lower Torso (1910) has four fingertips at the top of the picture and two feet that are so long that they almost forbear to finish. Without instep arches, toeless, they belong to some prehistoric creature, almost longer than the calf from the knee to the ankle. Broadly, Schiele’s solution is to guillotine the feet and their pertinacious complications, substituting shoes and boots instead, which he can deliver with effortless bravura.

The other thing in this exhibition worth noting is Schiele’s incomparable skill with hair – pubic and cranial. All varieties of pubic hair are here – magnetised iron filings, sparse, thick, fuzzy, wiry, black burning bushes. The hair on the head is even more astonishing: Standing Nude with Stockings (1914) may not have solved the nipple problem (an orange limpet with beading around the edge like a lace doily) but the hair could not be improved. It is black and Schiele has used the wooden tip of the brush to score its density. It and Schiele’s other triumphantly successful hair exploit the contrast between delicate uncertainty and the firm, deliberate line surrounding the anatomy. At the edges of the hair, he uses a starved brush, as he does frequently for his green and pink touches to the texture of the body. With a starved brush, deliberation is impossible. The procedure is always chancy. The artist never quite knows how much pigment will be left behind. A continuous outline is impossible.

In the 1910 work Seated Female Nude with Raised Right Arm (Gertrude Schiele), Schiele has already worked out several techniques and strategies: her hands are shielded behind her head; her left arm hides half her face; her wonderful, totally convincing hair is a mixture of pinks and browns (for auburn) and bleeds a fraction beyond the vague, uncertain, multiple black crayon outline so we know for certain that this hair is buoyant, springy, dense.

The worst painting in the show is The Dancer (1913), an alleged self-portrait done in gouache and pencil. It is an action painting, striving for kinesis, but resembles a flayed portrait of musculature for Vesalius, defaced by a vandal. The face is disguised with paint and lines. The gouache is arbitrary. The pencil line is everywhere jerky, overemphatic and wayward, creating a hectic multitude of mistakes. The catalogue claims it is one of the “most remarkable of all Schiele’s works on paper”. It commends “a high degree of animation”. The catalogue is wrong. When it says, “Some lines serve to delineate the principal contours of the figure, others seem little more than a kind of frantic scribbling,” the catalogue is right.

The greatest single work here is Sick Girl (1910). Its means are spartan in their restraint. It is primarily a drawing in black chalk with local colouring, beautifully judged. She is supine. Her hands are folded and raised to her mouth, masking it and hiding their own distracting detail. The gesture is almost prayer-like but equally anxious and simply tense. The simplification of the face is completely appropriate. The nose is two tiny, clean nostrils; the eyebrows are so fine they are nearly invisible; the expression in the black eyes is heartbreaking, withdrawn, patient, waiting for things to improve, single-minded and self-absorbed.

And the hair! In its way as fine as the eyebrows – close to the head, blonde, with two strands escaping. The gouache is sparse white on the stomach, tinged with lightest apricot at the vagina, forked at the top with two tender lines, almost invisibly rounded at one side of the base. It is a drawing all frailty, untouched by sexuality. A great masterpiece. The catalogue advises that it may be influenced by Edvard Munch’s morbid, melodramatic paintings of the children’s sickroom. The catalogue is wrong.