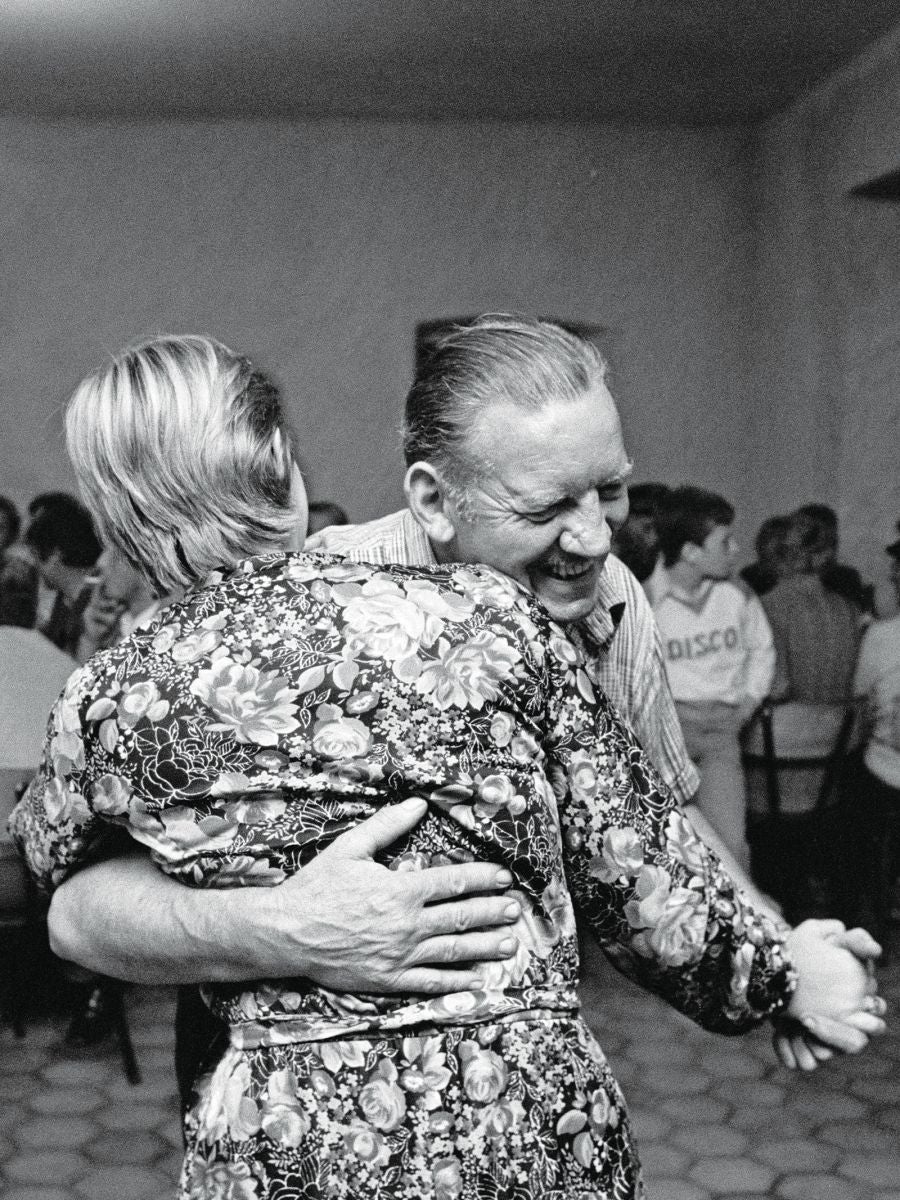 Embraceable you: doing what comes naturally
at a local social in Haute-Savoie.
Photo: Jean Gaumy/Magnum Photos

Some years later I lived and worked in East Africa. There I fell in love with Olympia, my late wife. Olympia was a Goan who had been brought up with a love of music and dance. She was a talented classical pianist, but was no music snob, and switched effortlessly from Beethoven sonatas to Elvis Presley love songs. We courted in the nightclubs of Nairobi and danced to fashionable bands from Congo and South Africa. The warm glow of remembrance of those days is always suffused with those sounds.

Children and careers put paid to our dancing. But when our children had passed the babysitting stage, we wanted to do things together and discovered Kelly’s, the local dancing school. We had always danced by instinct, so we had to start from scratch with the basic techniques of ballroom and Latin and with memorised routines. It was difficult and we almost gave up, but we both had a streak of determination and competitiveness and started to climb the long ladder of grade examinations.

This burgeoning hobby came to a sad end when Olympia fell victim to cancer, which, in its later stages, disabled her. I put dancing in the past tense, and the medals were tucked away.

After Olympia died, I wanted an escape from grief and went back to the school where our teacher, Sam, offered to partner me. I gradually improved and passed more exams. That led to an enterprising television producer fixing up a dance with Alesha Dixon, the hot favourite to win Strictly that year (which she did), and, from there, to the Strictly Christmas show and a foxtrot with the wonderfully gifted Erin Boag to the sentimental strains of “Walking in a Winter Wonderland”.

Now, my Friday dance lesson is jealously protected: a small refuge from a fraught ministerial routine. For an hour, I completely switch off from affairs of state and immerse myself in the finer points of posture and footwork. In truth, in my eighth decade, the hips no longer move as freely as they once did. But there is satisfaction in small improvements and I can learn much from my teacher Nick and from my partner, Cheyenne, who together mix teaching with competing to join the world’s top couples. And in the background another coach, Anne Gleave, in her day the world’s number-one professional dancer, is coaxing perfection from some remarkable Chinese or American pair. It is a humbling but uplifting experience.

I have been happily remarried for ten years now. Rachel and I have no aspiration to join the world’s dancing elite or even to win medals. But it is one of our simple pleasures to roll back the carpet and dance – or, as we did last Saturday, turn up at a local dance and jive.