The Anointing of David by Paolo Veronese

It is a measure of Paolo Veronese’s fame that he fascinated not only succeeding generations of artists, from Rubens to Delacroix, but also the Monty Python team. One of its sketches featured the pope summoning Michelangelo into his presence and demanding to know why the painter had included a kangaroo, three Christs and 28 disciples in a painting of the Last Supper. After much toing and froing, the painter agreed to change the title of the picture to The Penultimate Supper.

This scenario is more than simply a piece of Pythonesque absurdity. It is based on a real incident in which Veronese (1528-88) was called before the Inquisition (no, no one expected it) to account for the inclusion of a jester with a parrot, a servant with a nosebleed and two German soldiers in his painting of the Last Supper for the re­fectory of the Basilica di Santi Giovanni e Paolo in Venice.

A transcript of the examination survives, the only verbatim account of any of Vero­nese’s words. Why does the servant have a nosebleed, the inquisitors asked? He has suffered, said Veronese, “some accident”. And the jester? “He is there as an ornament.” As for the German (and therefore Protestant) soldiers: “It seemed to me suitable and possible that the master of the house, who as I have been told was rich and magnificent, would have such servants.”

Veronese went on to explain that when he had a bit of leftover space in a picture, he liked to “adorn it with figures of my own invention”. The painter ingeniously got out of his fix not by painting out the offending figures as the Inquisition ordered but by changing the title of the picture to The Feast in the House of Levi. 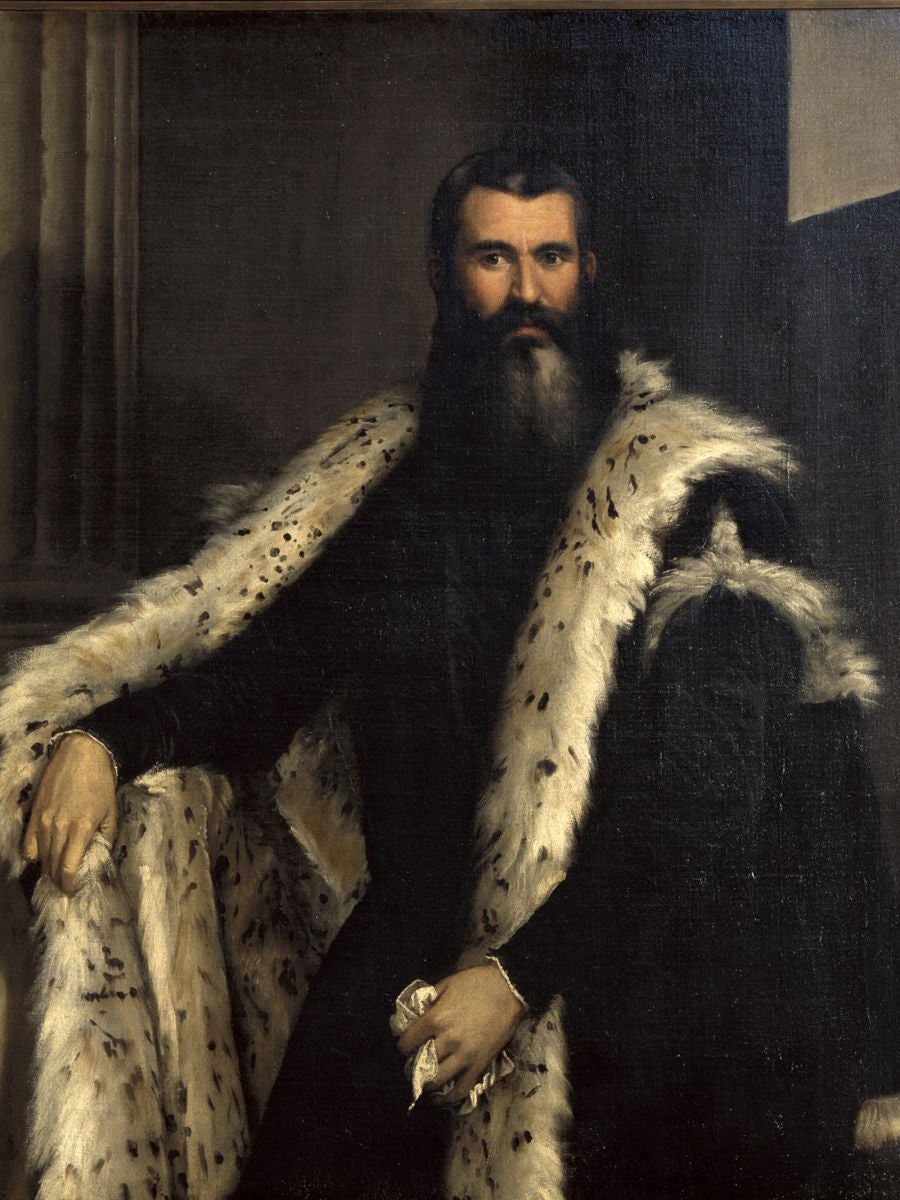 Portrait of a Gentleman

The inventiveness, both mental and pictorial, evident in this exchange is everywhere apparent in the National Gallery’s “Veronese: Magnificence in Renaissance Venice”, which, amazingly, is the first major exhibition of his work in Britain. There are 50 paintings on display and, as he hinted to the Inquisition, what they demonstrate above all is that where nature abhors a vacuum, Veronese equally abhorred empty canvas. Figures pack every available inch: in The Raising of the Daughter of Jairus (circa 1546), there are 13; in The Conversion of Mary Magdalene (circa 1548), there are 15 and a dog; in The Anointing of David (circa 1550), there are 33, plus a cow, a donkey and a goat. (He loved to put animals in his pictures, as counterpoints to the serious human business going on.)

Though Veronese has long been lauded as the greatest of the Venetian colourists, tying his figures together with chromatic ripples and harmonies, his sheer fecundity has in more recent times been held against him. “It may be doubted whether, as a mere painter, Paolo Veronese has ever been surpassed,” wrote the pre-eminent art historian Bernard Berenson in 1894, but for 20th-century critics the key word was “mere”. Veronese’s facility was not in doubt; what was questioned was his profundity and spiritual insight. Where were they?

His pictures came to be seen as gorgeous visions of biblical or mythical scenes, populated by the silk-clad cream of Venetian society – paintings that are lovely to look at but in essence lightweight, especially when contrasted with those of his older contemporaries such as Titian and Michelangelo.

It is an accusation this exhibition cannot quite dismiss, although there are more flashes of depth to him than his critics acknowledge. Visual enchantment and sheer painterly skill are, however, substantial gifts and if in his pictures the sum doesn’t always measure up to expectations, the parts most certainly do. The lynx fur that lines the coat of the unnamed gentleman in a portrait from 1555 and the blue, gold and ivory dress worn in The Mystic Marriage of St Catherine (1565-70) are just two of innumerable examples of miraculous passages of paint. His figures show, too, an extraordinary variety of poses: an angel hanging from a date palm with one hand, legs crossed around the trunk, while tossing down the fruit to the holy family below, or the dreaming St Helena perched on a window seat, one foot insouciantly propped on a sconce, are daring postures for religious pictures. “We painters,” he told the Inquisition, “use the same licence as poets and madmen.” His colours are always sumptuous and never strident; as Delacroix noted, he modelled with colour rather than light and dark and even “maintained the strength of hue in shadow”.

The show in London charts every stage of Veronese’s career, from his early years in Verona to his arrival in Venice around 1555 and his long sojourn there. From the start, Veronese composed his pictures as if he were painting scenes from a play. That offers a clue to how to approach this exhibition: as with the theatre, even when the action does not entirely convince, there are always the grand spectacle and illusion of the stage set to delight the eye.

The exhibition runs until 15 June