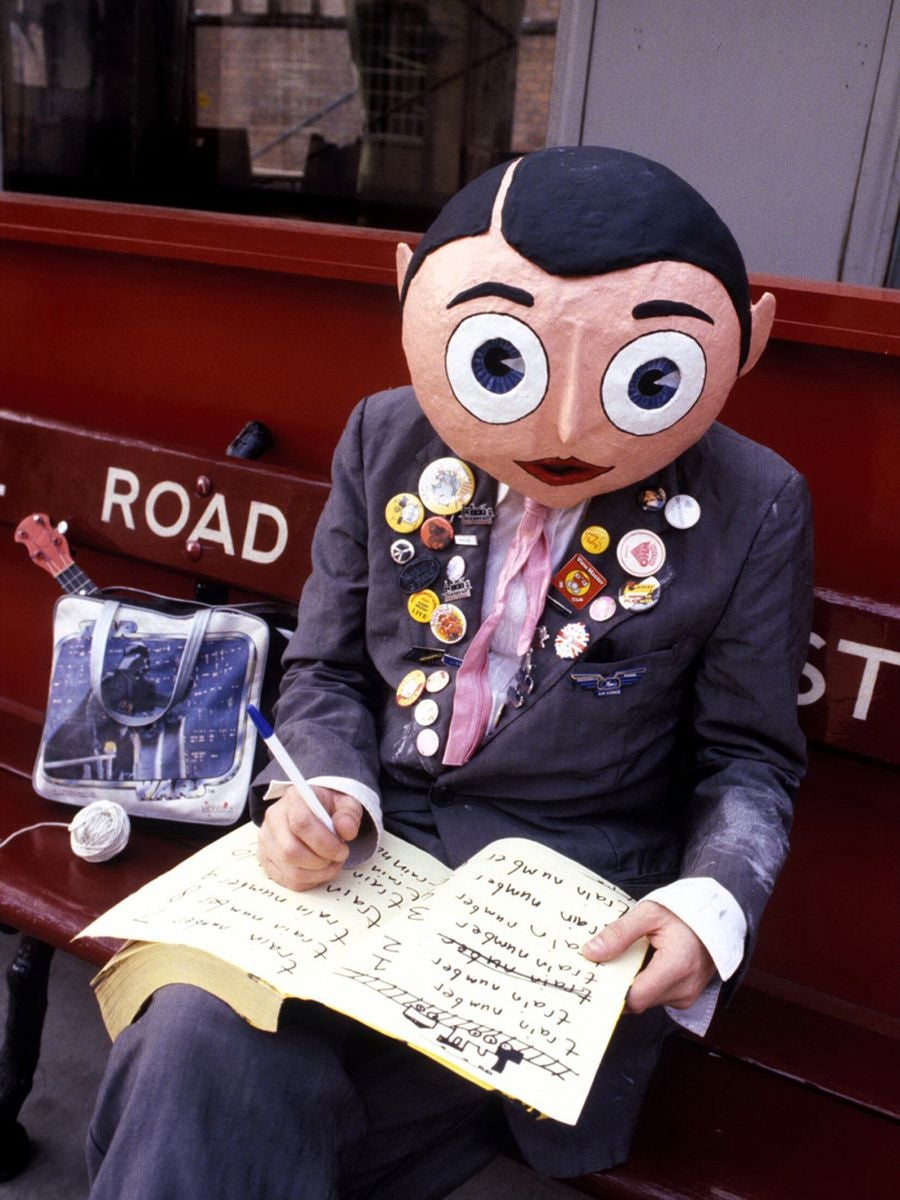 The eminent Australian cultural critic Robert Hughes once skewered a wrong-headed standard dismissal of modern art (and specifically Carl Andre’s “bricks at the Tate”). It was wrong to say that even a child could do it, he said. In fact, the opposite was true: contrary to appearances, only anybody but a child could do it; it needed the knowingness and intention of adulthood.

I thought of this recently when, moving house, I was trawling nostalgically through a tranche of old vinyl records and came across a copy of Frank Sidebottom’s debut album, 5.9.88. On it was written: “To Stuart, with best fantastic regards, Frank”. I had friends round at the time and a wistful “Ahh” went up from everyone except their nine-year-old daughter. She looked at the cover dispassionately, suspiciously even, at the stylised, sad-eyed, giant-headed manchild, and concluded: “He’s weird.”

The man in the papier mâché head had something of the child about him, in his irresponsibility if not his appetites. Under his own name, he wrote for the claymation series Pingu, and his most familiar creation did appear from time to time on children’s TV and in comics. Yet kids weren’t his core audience. A child could get it, sure – the funny voice, the daft get-up, the puppets – but adults would find something more: the plangent bottom note in the nasal whine of silliness, the whimsy, absurdity and melancholy in the story of the overgrown, overdressed bloke still living in loving exasperation with his mum in Timperley – and, of course, the frisson that came from knowing that there was in fact a grown man in there, a beery, divorced post-punk musician from Manchester, who died of throat cancer four years ago and was destined for a pauper’s funeral until a Twitter and Facebook campaign bought him a decent burial. (Some weird juxtaposition, 21st-century technology preventing a 19th-century fate.)

The man in there was called Chris Sievey. He’d been a minor stalwart of the Manchester music scene with his band the Freshies since the mid-Seventies. Punk’s ethos had chimed with his outsider temperament and he had a couple of indie hits with “I Can’t Get ‘Bouncing Babies’ by the Teardrop Explodes” and “I’m In Love With the Girl on the Manchester Virgin Megastore Checkout Desk” (later renamed “I’m In Love With the Girl on a Certain Manchester Megastore Checkout Desk”), which reached number 54 in the charts in 1981.

The Freshies produced the world’s first multimedia single by including a Sinclair Spectrum game, The Biz, on the B-side. On this, Sievey also first introduced the character that he would become best known for, and that would essentially subsume him for the rest of his adult life. Frank Sidebottom had a studiedly “northern” name, evoking generations of stage comics and their characters, who were daft losers and simpletons. The conceit was both simple and grotesque. Frank was an aspiring pop star and entertainer with an enormous spherical head and a mournfully cute visage. There were no jokes as such. It was situation comedy in the truest sense of the word; the absurdity of it all was what we were being invited to laugh at. Like much classic British comedy – Hancock, Steptoe, Morecambe and Wise, Norman Wisdom – the keynote was pathos: thwarted expectations, grandiose schemes, inevitable failure.

At 35, Frank still lived with his mum and used his shed as his artistic base, along with his occasional sidekick, the piping-voiced puppet Little Frank. His own voice was a parody of the nasal Manchester drawl, achieved at some discomfort by wearing a swimmer’s clip on his nose for hours under the paper head. The writer Jon Ronson remembers how “Chris would be Frank for such long periods, the clip had deformed him slightly, flattened his nose out of shape. When he’d remove the peg after a long stint I’d see him wince in pain.”

Ronson is one of several now well-known media personalities who served time in Frank’s Oh Blimey Big Band. The DJs Mark Radcliffe and Chris Evans were sidemen and drivers. Frank’s neighbour Mrs Merton was played by Caroline Aherne and became a successful comedy character in her own right. Ronson even quit college and moved to Manchester from London to be in the band. With Peter Straughan, he has co-written a film, Frank, based on the Sidebottom story, directed by Lenny Abrahamson and starring Domhnall Gleeson, Maggie Gyllenhaal and Michael Fassbender, who plays the lead. This last piece of casting has prompted amazement, as if Edward Norton were starring in a Noddy biopic.

I met Chris/Frank several times. I saw him play a gig in the late Eighties (with Ronson on keyboards) at Burberries club in Birmingham. It still ranks as one of the most enjoyable nights out of my life. At one point, a rare dissenter threw a ten-pence piece at the stage. “Oh great,” Frank said, delighted: “I collect decimal coins.” The set was a series of hubristic covers – “Material Girl”, “Radio Gaga”, etc – plus Frank’s inimitable originals, of which my favourites were always the oddest, such as “Hit Dick Turpin” or “Mr Custard You’re a Fool” (Mr Custard, you’re a fool/Red Indian chief, you’re a fool/Mike Tyson, you’re a fool/But at least you’re a millionaire). Sievey always struck me as both unassuming and utterly unpredictable, a portly chap with a permanent pint, constantly on the verge of some kind of situationist mischief.

Radcliffe recalls, “He was so creative, so brimming full of ideas . . . he lived his life as an elaborate extended act . . . One time we were talking about travel games and he decided that a good idea would be travel snooker. The next gig we went to, he’d brought a set that he was developing with Velcro balls. We went from Timperley to London in a van with a snooker table in the middle of it, which meant there was barely any room to sit. But that was worth it for Chris, because that was a good joke.”

With the head on, Sievey ceased to exist. Mick Middles, the author of a forthcoming biography, Out of His Head, puts it this way: “The moment the head is placed, the change occurs. Not merely a change in attitude or outlook, but a journey from one person to the other. I completely believe that Chris was born as two people.” Middles even goes as far as to make a comparison with transgender individuals.

Sievey wasn’t given to recriminations, in much the same way as he wasn’t given to pensions, tax planning and the like. Jon Ronson remembers how, after his death, “Someone said to me, ‘Were you surprised he’d died penniless?’ And I thought, ‘I’d be a lot more surprised if he’d died with a nest egg.’ It reminded me of Ken Dodd, when he was done for tax evasion. His excuse was ‘I’m an artist. All I think about is comedy and jokes.’ Chris was like that.”

But Ronson did feel that some people had borrowed heavily from Frank for their own work. And you hear his influence in much modern northern comedy – sometimes, it has to be said, in a stifling, clichéd, parochial way, a kind of exaggerated homespun northernness, in the references to “that there London”, chip shops and the like. Frank was always much stranger and sadder than that. It’s a pity he didn’t live long enough to see properly the wholesale media move to Salford. I’d have liked to see him on the piazza here, open-armed and fixed of expression, lips pursed and eyes wide, welcoming charmed and slightly terrified executives. Oh yes, I would, I really would, as he would have said.

“Frank” will be in cinemas from 4 May