In 1957, Richard Hamilton sent a letter to architect friends that inadvertently became a manifesto. “Pop art,” he wrote, “is Popular … Transient … Expendable … Low Cost, Mass Produced, Young … Wicked, Sexy, Gimmicky, Glamorous, Big Business.” The note marked a turning point in his career and, for the art world, prefigured the flood of bright, brash, jokey, plasticky postmodernism that was to dominate for the next 40 years. But as Tate Modern’s new retrospective shows, it is too neat to package up Hamilton as pure pop.

London has gone Hamilton crazy this month but it doesn’t feel like overkill. Unlike Warhol or Lichtenstein – overexposed and often over here – or the more instantly accessible Caulfield or Blake, Hamilton flies slightly under the radar: a hugely influential ideas man but not quite a household name; a major artist who straddles different genres and schools and has no one signature style, yet who was nevertheless responsible for a handful of joltingly familiar images.

Coming two and a half years after Hamilton’s death, aged 89 – though planned with his involvement – Tate Modern’s retrospective, as well as the ICA’s reconstruction of some of his 1950s rooms for the Independent Group of artists and the Alan Cristea Gallery’s exhibition of his prints, is a timely canonisation of Hamilton, putting him on the podium with his feted contemporaries in Team Figurative (Bacon, Freud et al). 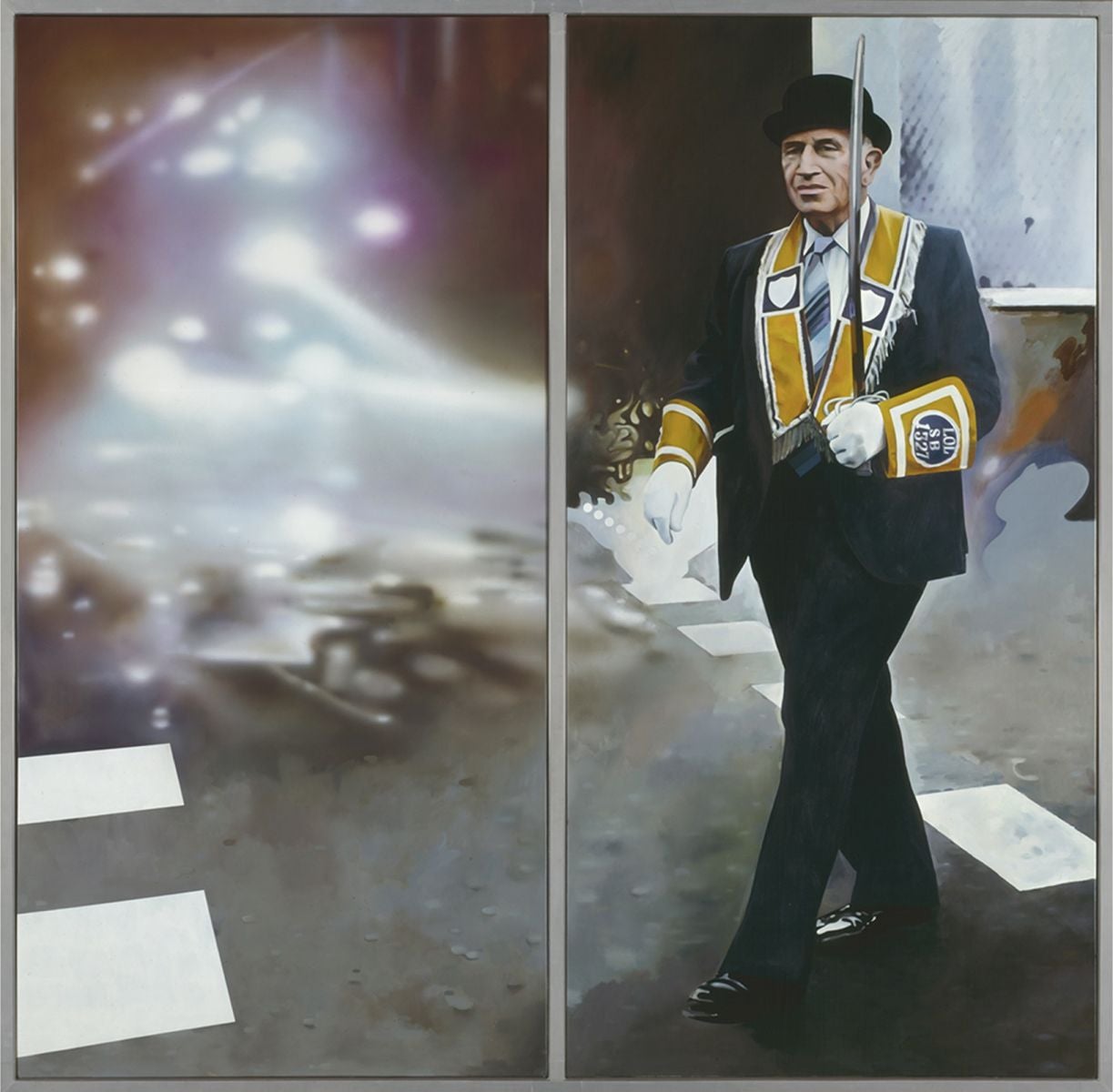 As the Tate’s 17 rooms show, it’s no surprise we don’t see more of Hamilton’s work reproduced on mugs and tea towels, à la Andy or Roy. He was simply too various, spanning surrealism, abstraction, conceptualism, installation and political satire. Much of his work, while wryly satirical of modern media, is still a celebration of shiny design and commodities, of Chrysler and the space race, Braun and brawn.

The Tate exhibition opens with a re-creation of Hamilton’s 1951 ICA show “Growth and Form”, which he put on after he’d left the Slade. This is the 1950s of the Festival of Britain, in which aeroplanes intersect with biological shapes, sea creatures, eggs and bones. It’s a cross between a biology lab and Ernest Race’s sitting room.

It is with the reconstruction of Fun House, originally shown as part of the Whitechapel Gallery’s 1956 show “This Is Tomorrow”, that Hamilton explodes into pop. Now a clichéd time capsule of the rock’n’roll era (the installation incorporates film, music, distorted architecture, op art and imagery of B-movie robots and Hollywood pin-ups), at the time this was wholly fresh and subversive – a send-up of Americana, as well as a celebration of new youth culture.

Elsewhere, we see his Towards … paintings (1962), explorations of male beauty, masculinity and sportsmanship in a fast new era, and his two 1964 Interior pictures, which combine blocks of acid colour with Eames furniture and a cut-out film still of the actress Patricia Knight. One has the assassination of JFK playing on a TV in the background – the atmosphere is jokey but tinged with Hitchcockian claustrophobia. 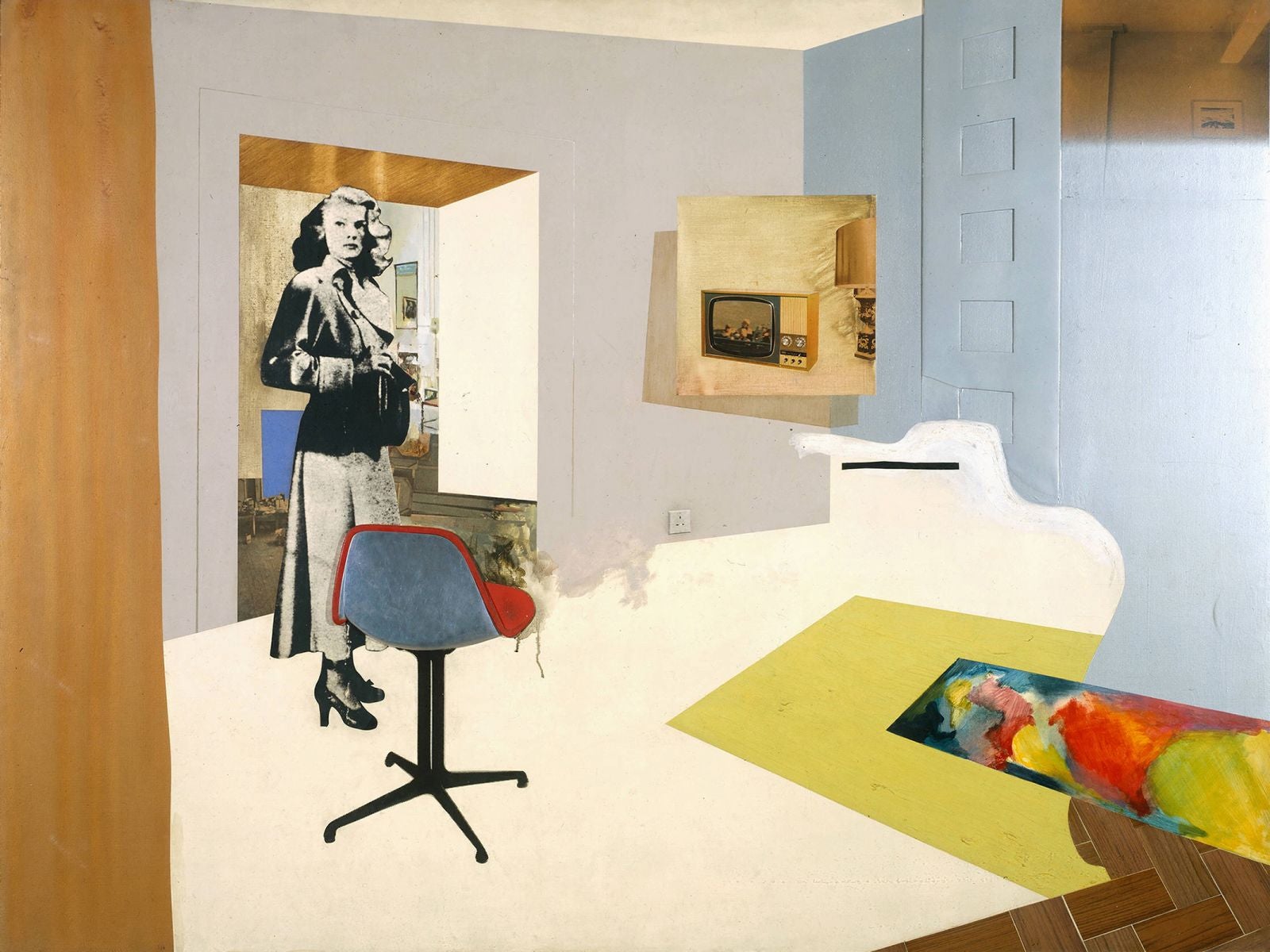 Two much later room sets, Treatment Room (1983) and Lobby (1985), revisit such stifling interiors: the former a DHSS waiting room-meets-doctor’s surgery, with a muted Maggie on a TV monitor ticking off an NHS patient for ever; the second a disorienting green-carpeted hotel with mirrored columns, white stairs and a painting of the same scene beyond, showing how fine the line is between postcard idealism and nightmare.

Also from 1964 is Portrait of Hugh Gaitskell as a Famous Monster of Filmland, a reaction to the Labour leader’s refusal to support nuclear disarmament. Here, his face is a bloated, monstrous mask, with a definite touch of Francis Bacon in the paint palette.

Later rooms show Hamilton at his most playful. One is dominated by his series of works celebrating the design of Dieter Rams for Braun. For Hamilton, the German industrial designer was the Jonathan Ive of his day. Hamilton puts his own name on a shiny toaster, also writing a tongue-in-cheek paean to toast; it’s more absurdist than a satire on advertising. The Critic Laughs (1968) elicited the appropriate reaction from this critic, though I’m always easily tickled by an electric toothbrush oscillating a set of dentures. 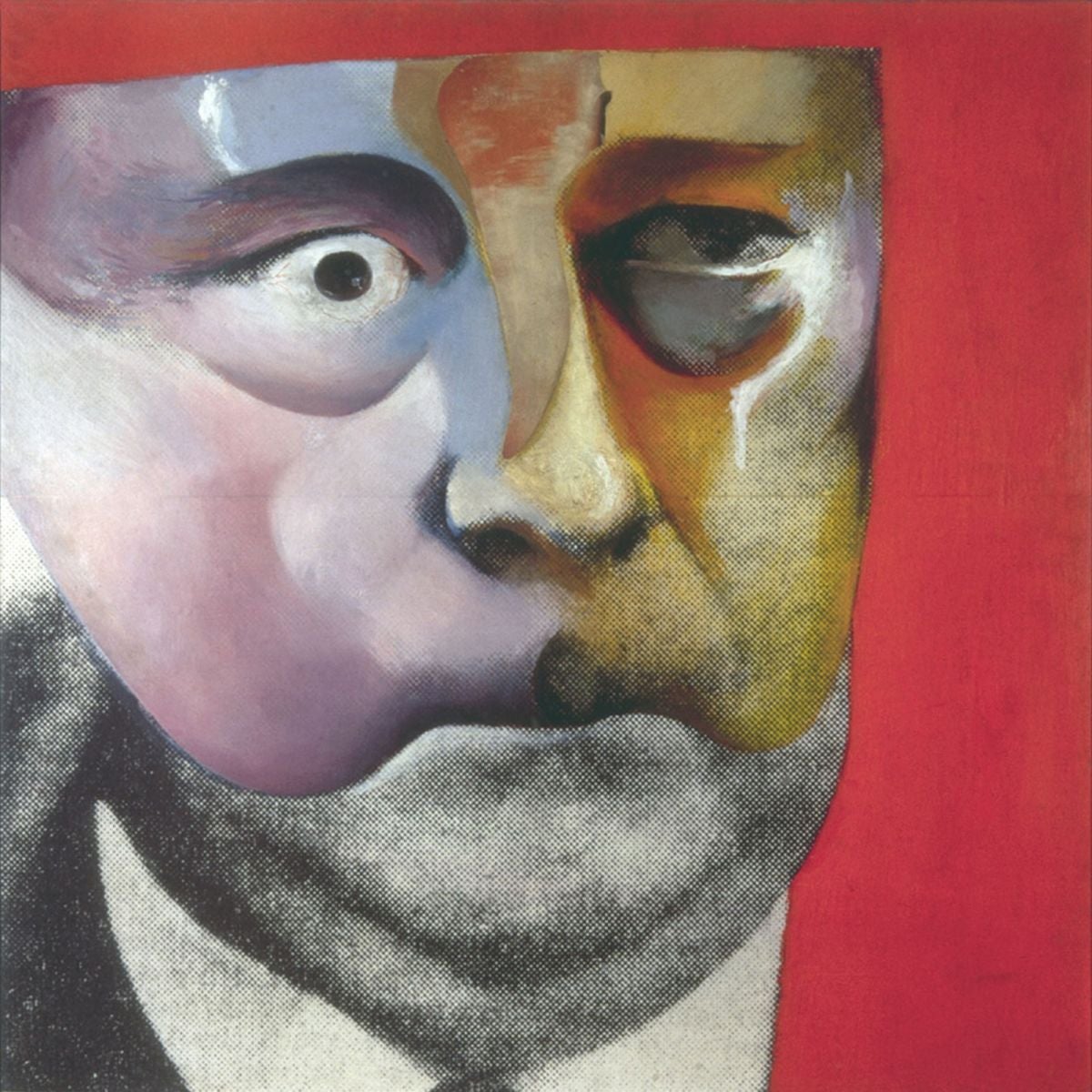 Portrait of Hugh Gaitskell as a Famous Monster of Filmland (1964)

By the 1970s Hamilton had moved on to wonderful piss-takes of Andrex adverts, with their euphemistically floral imagery and soft-focus sylvan maidens. In the bloom-laden Flower-Piece series (1973), Hamilton swaps the pastel loo rolls for turds.

Hamilton kept working until his death, when he was reworking some of his earlier interiors-centred pieces. In the interim, much of his work was more political, some of it more successful than others. A few of his 1990s and 2000s paintings seem lefty-art-by-numbers, pieces such as Maps of Palestine (2009) or Shock and Awe (2010) – with Tony Blair as a cowboy – lacking the wit or innovation of his earlier work.

A slightly earlier triptych (1982-93), depicting the Irish Troubles, is much more successful: the three paintings, of Bobby Sands, an Orange marcher and a British squaddie, powerfully combine Hamilton’s pop sensibility with stark news footage and innovative technique. It’s pop art grown up and punched in the guts by reality.