We see them everywhere, the invisible women; everywhere in books, that is. They are in the dedications (“To Cynthia/Emma/ Sarah, who was there”), in the acknow­ledgements (“. . . and finally I would like to thank my wife, without whom . . .”) and increasingly in the titles – Nora: the Real Life of Molly Bloom; Véra: Mrs Vladimir Nabokov; Zelda Fitzgerald: Her Voice in Paradise; and Claire Tomalin’s The Invisible Woman: the Story of Nelly Ternan and Charles Dickens, which has now been adapted into a subtle and moving film directed by Ralph Fiennes (who stars as Dickens, with Felicity Jones as Ternan). When Tomalin began her research into Dickens’s mistress, she found that Nelly Ternan had “vanished into thin air”. Nora, Véra, Zelda and Nelly are writers’ Wags, which in this case stands for “wives and ghosts” – and the best ghost stories have long been found in literary biographies.

“Marriage interferes,” warns the great writer Henry St George in The Lesson of the Master by Henry James. The misanthrope John Fowles disagreed. “A writer’s wife,” he said, “is vital. Always, without exception.” His first wife, Elizabeth, was his chauffeur, chief editor and the “ghost”, as he put it, for several female characters. When she died in 1990, Fowles’s fiction dried up. Ernest Hemingway, according to a friend of his, needed “a new woman for each big book”. Hemingway had four big books and four wives.

Behind most great male authors, there is a chief muse and bottle washer; a one-woman literary agency. Wags are as different as the writers they serve but the perfect Wag will provide the inspiration for the writing, then read it, praise it, edit it, copy or type it (Sophia Tolstoy copied War and Peace seven times) and deliver it to the publisher. She will negotiate royalties, field phone calls, respond to fan mail, keep the children quiet (Elizabeth Fowles sent her two-year-old daughter to a convent) and remain invisible. This last clause is vital: we prefer to imagine our writers toiling away in solitude rather than suckling on the teat of an all-singing, all-dancing, round-the-clock personal administrator.

In George Eliot’s Middlemarch, Dorothea Brooke aspired to the life of the literary Wag. Filing her husband’s notes to The Key to All Mythologies would allow her a small part in the improvement of the world. “Many who knew her,” wrote Eliot, “thought it a pity that so substantive and rare a creature should have been absorbed into the life of another” – but what were the options for intelligent women who wanted to make their mark? The best that Dorothea could hope for was to live the life of another to the full.

Sophia Tolstoy, the world’s most unhappy writer’s wife, described her marriage to Tolstoy as a “sacrifice”. When Fowles visited Thomas Hardy’s former home, he found a crime scene. Above the study where Hardy produced Tess and Jude were the two “miserable attic rooms” in which Emma, Hardy’s first wife, lived and died. “What is the cost of a masterpiece?” Fowles wondered, and he wrote a poem about a mason who built a bridge that kept falling down. It would only stand, the mason was told, if he buried his wife below its foundations. So he buried his wife alive and the bridge survived. In an interview in 1984, Fowles said he wished that “someone would study novelists’ wives”. He added hastily: “And husbands”. He was right to concede that novelists can also be women but it is hard to think of a man who has been sacrificed on the altar of his wife’s book. Leonard Woolf did not slip out of history so Virginia Woolf could write.

When Fowles made his wish, he didn’t know that it had already come true a year earlier, with the publication of Parallel Lives: Five Victorian Marriages by Phyllis Rose. A study of writers’ wives – and husbands – Parallel Lives changed the genre of literary biography.

It now seems such a simple idea but at the time the originality of Rose’s subject was astonishing. The Victorian assumption that a biography should be the extended CV of a public figure was proving hard to dislodge. What possible purpose could there be in exploring private life? Rose examined the cost for Jane Welsh of being married to Thomas Carlyle; for Catherine Hogarth of binding herself to Charles Dickens; for Effie Gray of accepting John Ruskin; for George Henry Lewes of setting up house with George Eliot; for Harriet Taylor of choosing John Stuart Mill. Her conclusions were grim. The two Georges, who weren’t married and who both wrote, were the only couple able to sustain a happy relationship.

Five years after Parallel Lives, Brenda Maddox’s Nora, her biography of Mrs James Joyce, appeared. Three years after that, in 1991, The Invisible Woman was published. “In the scale of things,” Tomalin wrote of the actress for whom Dickens abandoned his wife and ten children, “Nelly is not an important person.” The inspiration for Estella in Great Expectations, Bella Wilfer in Our Mutual Friend and Lucie Manette in A Tale of Two Cities, Nelly matters to us because she was embedded in Dickens’s psyche and Dickens is embedded in ours. And Tomalin’s book mattered because it allowed biography to become ghost-hunting. 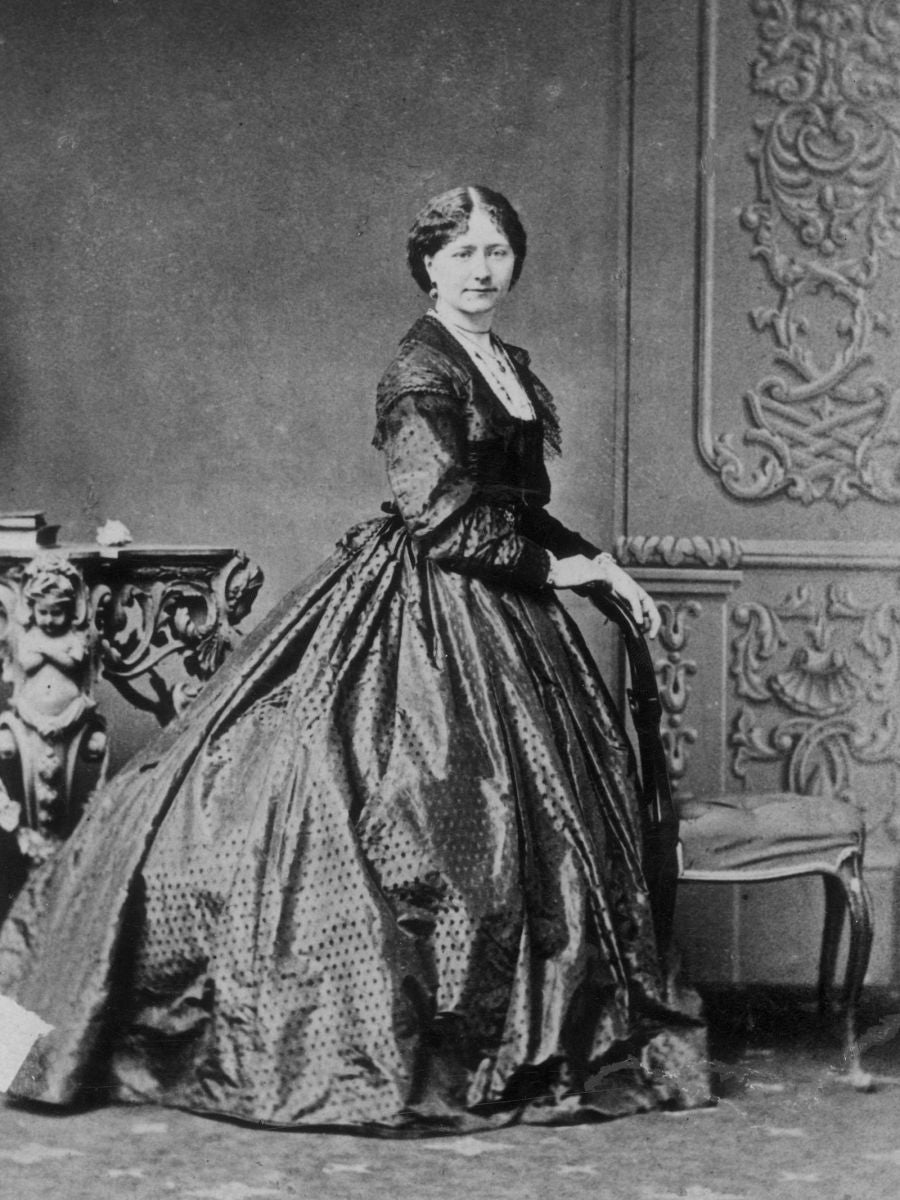 Lives of wives rolled into the bookshops. In 2007, even Mrs Shakespeare was given a life of her own by Germaine Greer. Ann Hathaway, Greer explained in Shakespeare’s Wife, had “left a wife-shaped void in the biography of William Shakespeare, which later bardolaters filled up with their own speculations”.

William and Ann Shakespeare spent much of their marriage apart but most committed writers are unable to function without the Wag. Despite playing the alienated author card, Vladimir Nabokov was never without Véra, his wife of 50 years. According to her biographer, Stacy Schiff, Mrs Nabokov more than fulfilled the job requirements of the invisible woman. Nabokov’s first and sharpest critic, she cut up her husband’s food, carried a gun for his protection and saved Lolita from the flames when he despaired of it (“We’ll not be throwing this away,” she said, picking out the charred pages). Like Nelly Ternan, Véra sought invisibility. Schiff has described how the more Mrs Nabokov tried to disappear, the larger and larger she became for her.

Wordsworth, who embodied the myth of the artist as a solitary genius, had the support of three Wags: his wife, Mary, his sister-in-law, Sara Hutchinson, and his sister Dorothy. His “devotees”, as Coleridge noted bitterly, did “almost his very eating and drinking . . . for him”.

Wordsworth never came close to wandering lonely as a cloud. The poem in which this line appears was inspired by Dorothy’s journal account of seeing daffodils dancing by the lake. Its most celebrated image – “They flash upon that inward eye,/Which is the bliss of solitude” – was suggested by Wordsworth’s wife.

“Wordsworth” is the name given to a cottage industry and the poet’s devotees were, inevitably, content to remain in the shadows. Dorothy, who was as shy as a badger, has now emerged – I wrote a book about her called The Ballad of Dorothy Wordsworth – but few women in literary history have left a wife-shaped void as large as that of Mary Wordsworth.

Strange to say but many writers, Wordsworth and Tennyson included, are averse to the act of writing. Once they have heard the words in their heads, an amanuensis is needed to put them down on paper. Wielding a pen gave Wordsworth a disabling knot in the side of his stomach and so, strictly speaking, Dorothy wrote most of her brother’s poetry.

Similarly, Emily Tennyson was responsible for the preservation of many of her husband’s lines that would otherwise, as Tennyson blithely put it, have “gone away on the north wind”. According to Ann Thwaite in Emily Tennyson: the Poet’s Wife, Emily burned Tennyson’s bad reviews before he saw them, protected him from guests he might consider a bore (a role ascribed also to Jane Carlyle) and dealt with his sacks of correspondence. Tennyson, so he said, would “as soon kill a pig as write a letter”.

Not all Wags have such proficient secretarial skills. Nora Barnacle, whose husband, James Joyce, used her unpunctuated prose for the voice of Molly Bloom, never read, let alone proof-read, Ulysses. “Sure, why would I bother?” she asked. “It’s enough that he talks about that book and he’s at it all the time.” Joyce set Ulysses on 16 June, the momentous day when Nora first made a “man” out of him. Without Nora, there would have been no Ulysses; nor would Joyce have written “The Dead”, the finest short story in the language. It was Nora’s memory of a lover who died young that Joyce gave to his character Gretta Conroy, whose revelation that she had once loved Michael Furey momentarily derails her husband.

Nora’s job was to look after reality while Joyce was off in his elsewhere; she fed him, held his hand, chose his clothes and, as Brenda Maddox puts it, “cut him down to size” and reassured him, “every time she opened her mouth, that Ireland was not far away”. Schiff writes something similar about the role of Véra for Nabokov: she gave her exiled husband “an atmosphere of Old World taste” and the pleasure of her “exquisite, uncorrupted Russian”.

It is the fate of the Wag to have her personality plundered. D H Lawrence described the role of Frieda, his aristocratic German wife, as to keep him “in direct communication with the unknown” and he used her as the model for Ursula Brangwen in The Rainbow and Women in Love and Connie Chatterley in Lady Chatterley’s Lover.

Similarly, many of Zelda Fitzgerald’s remarks found their way into the mouths of her husband’s heroines. When she had said nothing of note, Scott Fitzgerald would raid Zelda’s letters and diaries for material. “The most enormous influence on me,” he told Edmund Wilson, “in the four and a half years since I met her has been the complete, fine and full-hearted selfishness and chill-mindedness of Zelda.”

My guess is that biography has changed more over the past 30 years than writers’ egos. While Xerox machines and computers have reduced the workload of many a Wag, for every writer there is still a ghost. In The Lesson of the Master, the young writer Paul Overt asks Henry St George if there are “no women who really understand – who can take part in the sacrifice”. “How can they take part?” replies St George. “They themselves are the sacrifice.”

Ralph Fiennes’s film “The Invisible Woman” is released on 7 February. The book, by Claire Tomalin, is published in a new edition by Penguin (£9.99)