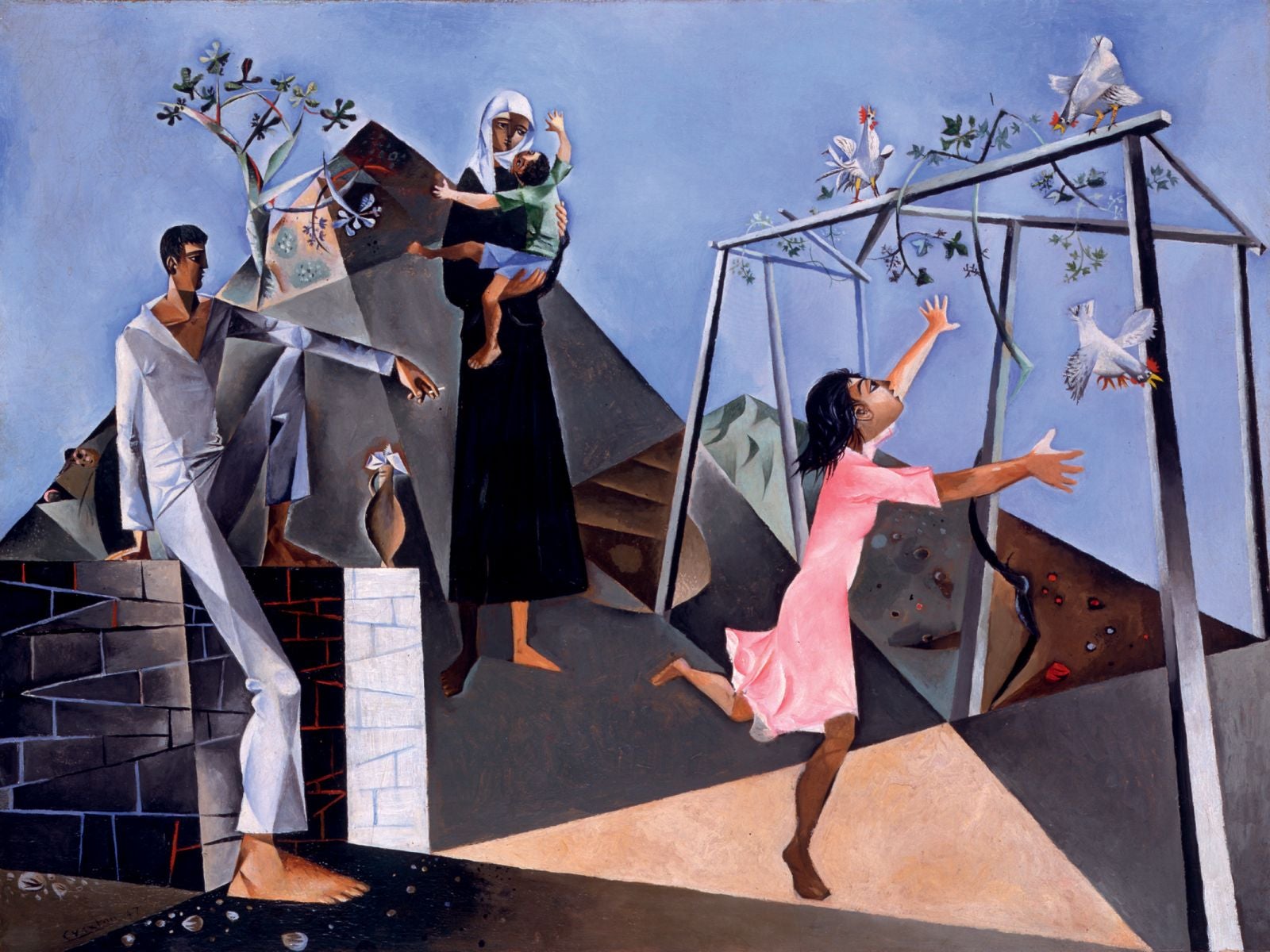 Islands of edgy light: Galatas (1947)
They may not like it but it is the fate of artists, as with all interesting creatures, to be labelled. John Craxton, a friend of Graham Sutherland, Paul Nash and John Piper, has duly been filed under “neo-Romantic”. These were the painters who in the years before the Second World War rediscovered the mystical work of Samuel Palmer and William Blake and reacted to the lowering mood of the times by conjuring up a British Eden of shepherds and overgrown green lanes among billowing hills that could be pulled close like an eiderdown. Craxton refuted the label, but grudgingly accepted a more accurate one: “Arcadian”.

This separation from his fellows was not just a question of taxonomy. From 1946 he lived largely in Greece, a place where, he wrote, “I find it’s possible to feel a real person – real people, real elements, real windows – real sun above all. In a life of reality my imagination really works. I feel like an émigré in London and squashed FLAT.” But in finding an authentic Arcadia in Crete he also distanced himself from the art and artists of the postwar world and so slipped out of the story. “A World of Private Mystery: John Craxton RA (1922-2009)”, a small but choice exhibition at the Fitzwilliam, is an overview and reminder of the career of this unfashionably joyous painter.

The first part of the exhibition shows his development as a largely self-taught artist who unashamedly drew on the work of those around him. Craxton tried out monochrome landscapes with schematic representations of himself as a poet-wanderer amidst burgeoning, spiky vegetation that were not just projections of Blake and Palmer but “my means of escape and a sort of self-protection”. He pastiched Sutherland when he accompanied him on a painting trip to Wales, and he grew close to Lucian Freud – personally and stylistically (both men liked to draw dead animals: Kenneth Clark recalled visiting them and finding a dead monkey hidden in their oven) – when they shared a flat in 1941.

The work of this period was likened by Wyndham Lewis to “a pretty tinted cocktail, that is good but does not kick quite hard enough”. It is an unduly dismissive judgement. Many of the pictures – take Hare in a Larder (1943) or Welsh Landscape with Sleeping Reaper (1944-45) – have a distinctive air of dream and enigma, even as Craxton searched for a style of his own.

He found that style in Greece. It not only lightened his palette but allowed him to use cubism’s fractured forms in a way that suited the sharpness of the light and the geometry of the landscape and houses. It was in Greece, too, that he developed his considerable skills as a portraitist. A spare and tender pencil drawing of Freud was followed by a series showing neighbours, friends and the characterful types he found at taverna tables. Soulful and full-frontal, the pictures have an immediate presence, sometimes using cubism’s lozenges, other times pared down and naturalistic. He would, he said, allow the image of his subject “into my personality and then draw it unconsciously”. 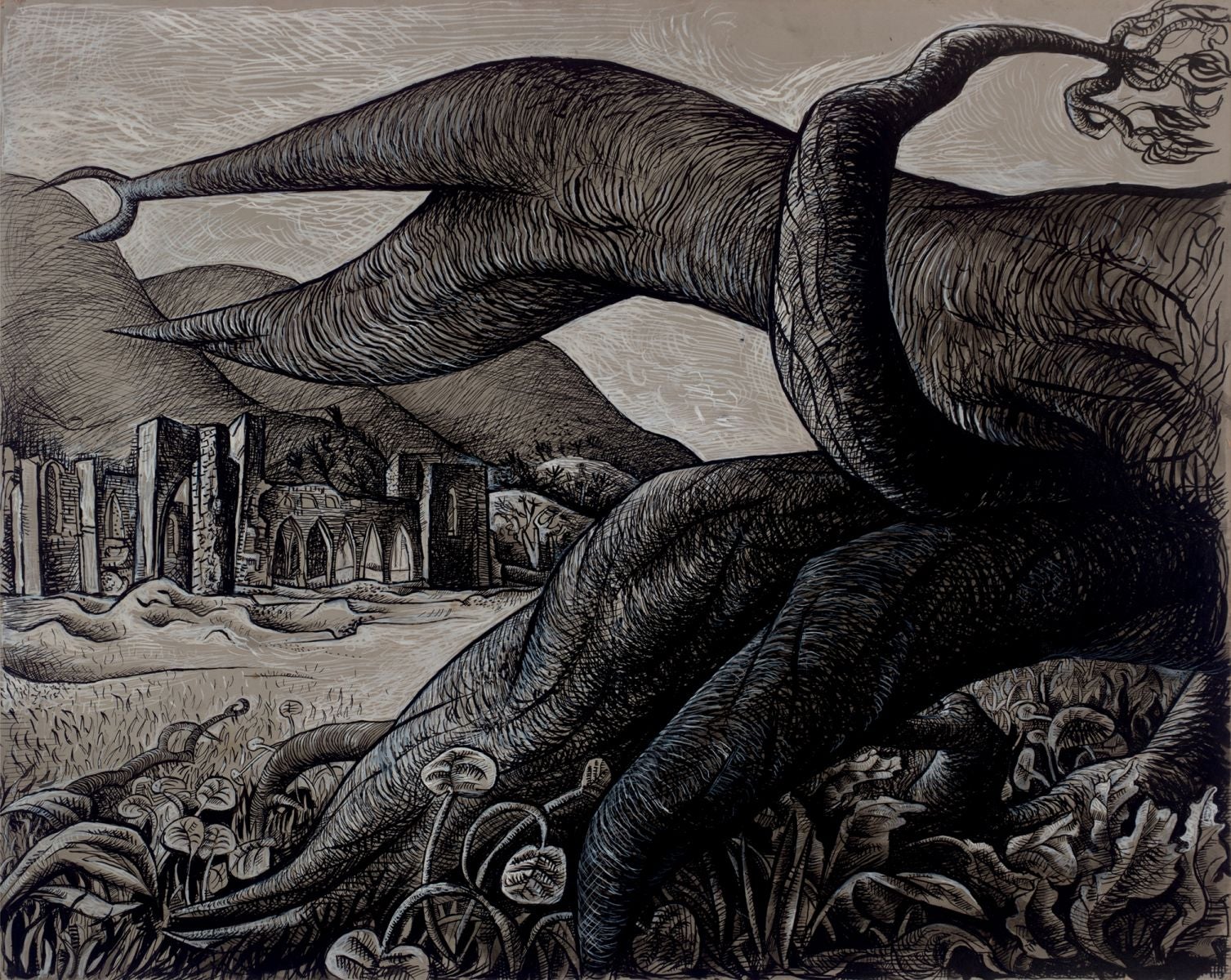 It was, though, the Greek way of life that entranced him. He saw the country and its people as representatives of an ancient way of life and he depicted them fringed with colour, bound by red and yellow outlines. Goatherds (he was a great painter of goats, “demonic, wilful and undisciplined”) and sailors in their white-and-blue uniforms were favourite motifs. One of his most unaffectedly pleasurable paintings is a colour-saturated image of three sailors eating a meal of prawns, squid, sardines and salad that is mouth-watering in every sense. When he painted panoramas of Hydra or Crete’s gorges he became near-abstract, reducing the scenes to flattened and highly patterned assemblages of coloured lines that bear the imprint of Byzantine mosaics.

A man of great charm, Craxton became friends with Patrick Leigh Fermor in Greece and it is through his drawings for the scholar-traveller’s dust jackets that he is now best known. Other friends included Margot Fonteyn and Frederick Ashton, and Raymond Mortimer (this magazine’s former literary editor), with whom he once smoked a joint in Toscanini’s private box at La Scala.

Craxton’s pictures were not always as popular with the critics, both because they stood outside the avant-garde and because, in their sun-drenched colours, they had the smack of, as a friend described it, “taking shape very slowly between late lunches and early drinks”. Yet these are not necessarily faults. In original hands – Craxton’s – they are merits.