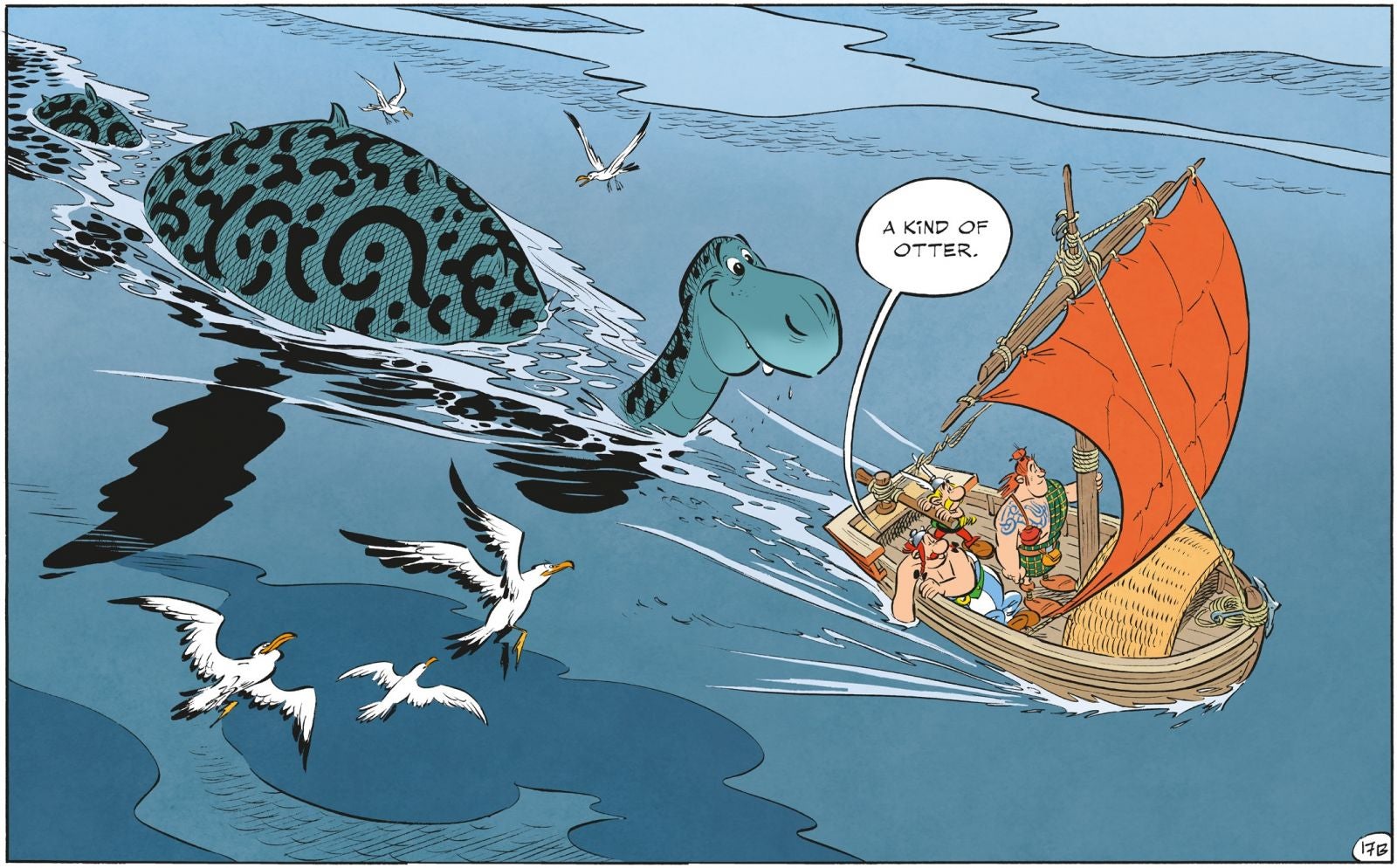 “The Year is 50BC. Gaul is entirely occupied by the Romans. Well, not entirely . . . One small village of indomitable Gauls still holds out against the invaders.” By Toutatis! They’re still holding out – over half a century since they first appeared in the magazine Pilote, founded by a group of young French comic writers and illustrators, including René Goscinny and Albert Uderzo, in October 1959, and a full eight years since the last Asterix book. Indeed: bis repetita placent!

After much wrestling and wrangling, a new Asterix book finally comes thundering off the presses, fists flying and Latin tags a-whirling, ready to fill Christmas stockings around the world – in an astonishing print run of no fewer than five million.

The indomitable Gauls have now been battling against the odds for years. Goscinny, who wrote the words, died in 1977 and the series might well have come to end there and then with Asterix in Belgium, if it hadn’t been for the illustrator, Uderzo, deciding to soldier on and continue with the series alone. He went on to produce another ten albums – of, it has to be said, rather variable quality.

Trials then followed tribulations: when Uderzo sold his rights in the series to the publishing giant Hachette in 2009, his daughter, Sylvie, wrote an open letter to Le Monde condemning him for selling out to “les hommes de l’industrie et de la finance”, and for betraying the values of Asterix and everything she had been brought up to believe in: “l’indépendance, la fraternité, la convivialité et la résistance”. A bitter court case followed. A series of live-action Asterix films – starring Gérard Depardieu as Obelix, the role he was born to play – broke records as the most expensive French films ever made, yet were all pretty terrible. Uderzo’s last story, Asterix and the Falling Sky (2005), in which Asterix and Obelix battled aliens, was, frankly, feeble.

But now is a moment of rebirth and reinvention. Uderzo has recruited a new writer and an illustrator – Jean-Yves Ferri and Didier Conrad – and handed over the menhir-sized baton to a new generation. In an introductory note to the book he wishes his successors well: “Congratulations to Jean-Yves Ferri and Didier Conrad for having the courage and talent to write and draw the new Asterix album.” So is it courage? Or sheer foolhardiness?

Actually, Asterix and the Picts marks a respectable return to form. The story concerns the plight of a Pictish warrior, MacAroon, “from distant Caledonia”, who has been washed ashore in Gaul and whom Asterix and Obelix obligingly help to return to his home country, rescuing his beloved, the red-haired Camomilla, from an evil rival chieftain, MacCabaeus. There is the usual battle with pirates and with a sea monster called Nessie, and the characters are represented in all their ludicrous glory: Getafix, the village druid; Vitalstatistix, the chief of the tribe; Cacofonix the bard; Impedimenta; Geriatrix; Unhygienix the fish vendor. (Interestingly, the translator, the ever-fastidious Anthea Bell – whom we have to thank for translating the mildly amusing French dog Idéfix into the truly magnificent Dogmatix, and the dutiful old French druid Panoramix into the delightful Getafix – has outlasted her French begetters and now finds herself working with Ferri and Conrad.)

The storyline lacks some of the complexity and subtlety of the early books and there is more than a touch of cute about some of the illustrations, with Camomilla looking suspiciously like a Disney princess, but nonetheless it’s good to have Asterix back.

The real question is why bother at all to try to keep the series going, except – obviously – as a marketing and franchising operation? We are living through a glorious age of rewrites, reversions, pastiches and homages: the past few years have seen an excellent new Sherlock Holmes, in Anthony Horowitz’s The House of Silk (2011); two new Bond books, courtesy of William Boyd and Sebastian Faulks; and a new P G Wodehouse out for Christmas, Jeeves and the Wedding Bells, again by Faulks, who is emerging as the modern English master of mimicry.

The novel has always been a weird, self- regenerating, recombinant form but the long-form comic is arguably only now discovering its true powers and possibilities, from Joe Sacco’s serious reportage to Gene Luen Yang’s historical graphic novel Boxers and Saints – so why return to the scene of past glories, like a Dogmatix to its vomit? What’s in Asterix’s magic potion?

Perhaps it’s simply the appeal of the underdog. Asterix is clearly for children, and for losers: it depicts a world where ungovernable appetites are momentarily sated and fulfilled. Growing up, one knew instinctively that Tintin and his adventures represented a world of adult meanings and responsibilities, unattainable sophistication and privilege. The Tintin books were for the sort of people who went to actual France on actual holidays; the sort of people who might read the books in the original French.

Asterix, with its absurd levels of comic-book violence – all those swirling stars and sticking-out tongues, black eyes and bumps to the head – was for anybody and everybody. It was the sort of thing you actually wanted to read. One could imagine a Tintin book as a gift from a benevolent godfather but you discovered Asterix for yourself, well-thumbed and plastic-covered, in the grubby wooden dump-bins of the local library.

The difference between these two great texts – or text-types – is revealing. According to the novelist Tom McCarthy, “The difference between Asterix and Tintin is like the difference between a Quentin Tarantino and a David Lynch film. One’s witty entertainment, the other’s great art.” There are a number of false assumptions about higher and lower degrees of art in McCarthy’s claim but he is certainly on to something.

What he may be on to is the age-old difference between different modes of storytelling, as defined by Erich Auerbach in “Odysseus’ Scar”, the famous first chapter of his book Mimesis (1946). Here, he contrasts a style characterised by “externalised, uniformly illuminated phenomena . . . connected together without lacunae in a perpetual foreground” with a style characterised by the “externalisation of only so much of the phenomena as is necessary for the purpose of the narrative, all else left in obscurity . . . permeated with the most unrelieved suspense . . . and ‘fraught with background’”.

Tom McCarthy prefers “great art”. And why not? I happen to prefer entertainment.

Above all, in Tintin there is a vast predominance of plot machinery, a superabundance of codes to crack and enigmas to solve. But in Asterix the plots are simple and the end result is always assured: the Romans are always beaten, there is always a banquet. Every Asterix album is really just a copy of the very first one, Asterix the Gaul (1961). Nothing changes. Tintin continually aspires to be more than itself, or what it was: Asterix is what it is. Defending his work, Goscinny once remarked, “Our only ambition is to have fun.”

This does not mean Asterix is merely witless and vulgar. Certainly, there is much in the books that is old hat and hackneyed, but then Tintin is often pretentious and affected. Hergé seems to have written primarily for his own pleasure and satisfaction, without reference to the needs and tastes of others – and as a consequence Tintin can now seem rather quaint and dated, a work of whimsy subject to the strange and incommunicable demands of its own laws and desires.

Asterix, on the other hand, always was the product of several sets of hands and minds, and so it achieves the level – almost – of epic. In the end, who cares who draws the pictures? Who the hell was Homer?