The bald, middle-aged man slumps against the wall in the yard. The blood from his companion’s head splatters his shirtless chest. He looks to his left, at the headless corpse lying next to him. The chainsaw continues to roar. The bald man rests his head against the wall once again. He awaits his turn. 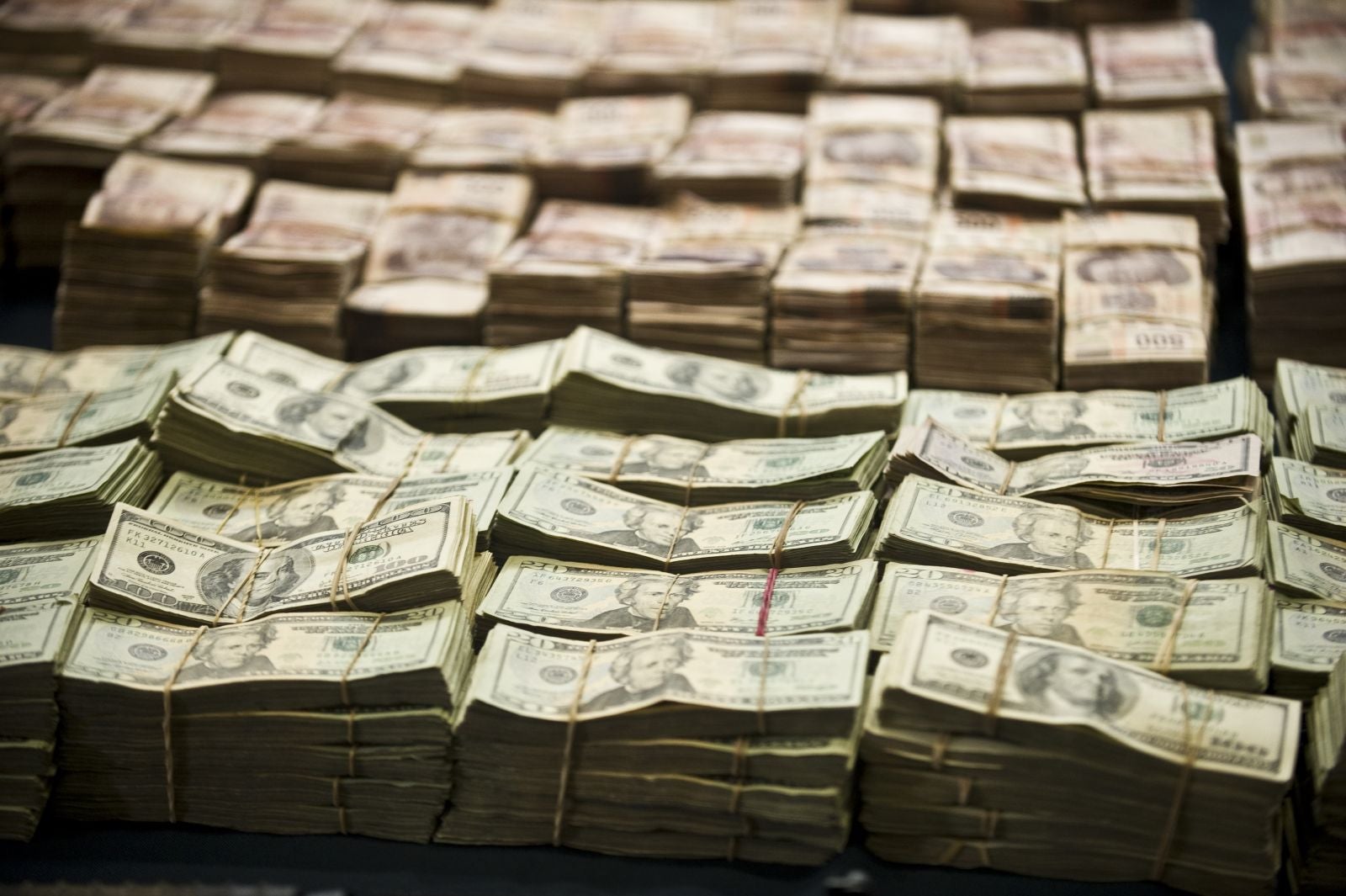 More than $1m US dollars and more than 41 Million Mexican pesos seized from Zetas in June 2012. Photo: Getty
Though the Mexican drug cartels have long been considered a threat to US national security, rarely has aggressive action to counter their growth been such a popular option. In Washington, calls to designate the cartels as terrorist groups have ratcheted up. On 13 October 2011, Ileana Ros-Lehtinen, a Republican congresswoman for Florida and the chairman of the House foreign affairs committee, declared that “we must stop looking at the drug cartels today solely from a law-enforcement perspective and consider designating these narco-trafficking networks as foreign terrorist organisations”. She added: “It seems that our sworn enemy Iran sees a potential kindred spirit in the drug cartels in Mexico.”
On the same day, in written testimony to Congress entitled “Emerging Threats and Security in the Western Hemisphere: Next Steps for US Policy”, the assistant secretary for terrorist financing, Daniel L Glaser, highlighted the problem of the drug cartels and mentioned El Chapo by name.
The view that there is a link between the cartels and terrorism (some expressions of this are unabashedly hyperbolic, especially the attempts to label alternative Mexican faiths a “spiritual insurgency”, in line with the theories of the US Army War College’s Steven Metz) has grown amid several topical developments as well as vastly improved US-Mexican co-operation in the drug war. The two countries – Mexico is the third-largest trading partner of the US – have a long, often troubled history with regard to security and intelligence-sharing.
Asa Hutchinson, the former head of the US Drug Enforcement Administration (DEA), still refuses to acknowledge that anyone besides the Mexican authorities is to blame for the failure to combat drug trafficking. “The culture of corruption that has developed in Mexico, the failure of the rule of law in Mexico, is one of the largest contributing factors to the violence we see today,” he says. “Mexico has allowed itself to be a major transit and source country. They resisted US help. In 1985, Kiki Camarena, a wonderful DEA agent, was tortured and murdered in Guadalajara, and there was a massive manhunt for the perpetrators, and Mexico [took the position] that we were infringing on their sovereignty. They have resisted any US assistance ever since. The cartels have operated with impunity, and that is not the fault of the United States.”
The DEA still works in Mexico, though Camarena’s ghost haunts its collective memory. In 1997, Mexico’s anti-drug tsar General Jesús Gutiérrez Rebollo was arrested for alleged links to the Juárez cartel. He was eventually sentenced to a total of 71 years in prison.
There have been setbacks during the outgoing Calderón administration, too. In 2008, two officials from Siedo, Mexico’s special organised crime unit, were arrested for being in the pockets of the Beltrán Leyva cartel. And in December that year, an army major assigned as one of Calderón’s bodyguards, Arturo González Rodríguez, was arrested and charged with feeding the cartels intelligence for $100,000 a month.
The allegations of corruption have hindered counter-drug operations: the Mexican military has had to fend off both credible accusations and propaganda disseminated by the cartels. While General Eugenio Hidalgo Eddy was stationed in Sinaloa and was in charge of local counter-drug operations, narco-mantas – banners made by drug traffickers – accusing him of protecting El Chapo were frequently found at crime scenes. Eddy insists that he fought the good fight. “Never did I make a pact! Never!” he told me, slamming his fist on his desk. “Others, I don’t know,” he added, quietly.
In January this year, General Manuel de Jesús Aviña was arrested and charged with ordering killings and torture and engaging in drug trafficking while stationed in the northern Chihuahua state. The Calderón administration had almost made it through its six-year term without a senior army officer being linked to traffickers. But since then, four other generals have been detained for alleged links to the cartels, including one who had served as defence attaché at the Mexican embassy in Washington, DC.
There have been allegations against US officials, too, and the ensuing questions of trust have complicated intelligence-sharing. “We’re in the business of collecting information,” the DEA’s then chief of intelligence, Anthony Placido, told me in 2010. “The problem with trying to share it is that we have to make sure we don’t kill the goose that’s laying the golden eggs. We have to make sure our foreign partners are trustworthy.”
Human rights abuses – children and innocent adults have been gunned down by the Mexican military and there have been allegations of torture and rape – have raised eyebrows at the state department, which has issued several scathing reports on Mexico during the Calderón administration. (The state department has also commended the country for making some much-needed improvements.) “Human rights are stupid,” a former Mexican general told me.

Diplomats continue to stress that US-Mexican relations, not to mention co-operation in the drug war, can survive the setbacks. “At 35,000 feet, the muscle tone and the strategic direction of the US-Mexican relationship are fantastic,” Mexico’s ambassador to the US, Arturo Saru­khan, told me late last year. “In many ways it’s like a Dickensian tale of two cities – it’s the best of times and it’s the worst of times. If you look at the formal diplomatic traction and relationship, it has never been better. But if you look at public perception on both sides of the border, [that] would seem to be thousands of miles from where the relationship is.”
So, co-operation has continued to increase with little opposition, as has US funding for the counter-drug Mérida Initiative, which was introduced in 2008 and will eventually channel $1.6bn in anti-drug assistance to Mexico and, to a lesser extent, central America. Through Mérida, Mexico has received Black Hawk helicopters and X-ray scanners for customs posts, as well as assistance in professionalising the police and training in the justice sector.
Last year, the Pentagon began flying drones over Mexican airspace in an attempt to gather intelligence on drug trafficking suspects. There was little public dissent. Global Hawk drones have been deployed; flying as high as 60,000 feet overhead, they are able to survey 105,000 square miles in a day. A second counter-drug operations centre, where US and Mexican agencies work together in the fight against drugs, has been opened in Mexico City. US military experts regularly visit the Mexican capital to consult with the security services and offer strategic advice. The DEA has a dozen offices in the country, out of which its agents now operate in a purely advisory capacity. In January, the new CIA director general, David Pet­raeus, the advocate and implementor of the counter-insurgency strategy in Afghanistan and Iraq known as COIN, visited Mexico City and met with the national security adviser and the head of Mexico’s spy agency, CISEN.
Calderón, who will step down in December, has repeatedly urged Washington to halt the flow of guns and cash from drug sales into Mexico (estimates of how many guns used in drug-related crimes in Mexico come from the US vary, but it is believed that Americans supply most of them). On the US side, however, there has been little in response aside from rhetoric. A new Mexican president – Enrique Peña Nieto of the PRI – was elected on 1 July, and has pledged to continue the fight against organised crime. Despite his promises, it is likely he will face suspicion from Washington because of his party’s long-standing “blind-eye” attitude to organised crime.

The question now is whether the US state department will take the step of designating the cartels as terrorist organisations. It has already done so with the Farc in Colombia. If Los Zetas and the Sinaloa cartel are categorised as such, the US would probably have more jurisdiction to increase co-operation with Mexico. Barack Obama’s signing of the National Defence Authorisation Act on 31 December could also allow US nationals suspected of narcoterrorism to be detained indefinitely.
What is unlikely to happen, however, is any move towards drug legalisation. Advocates of the policy, who grew optimistic with Obama’s election and the appointment of R Gil Kerlik­owske as director of the Office of National Drug Control Policy (Kerlikowske has repeatedly said that drug consumption must be treated as a health rather than a criminal issue), continue to be marginalised.
A growing number of former Latin American leaders – and even some current ones, such as the Guatemalan president, Otto Pérez Molina – have begun to push for discussion of a fresh approach to the drug problem. Calderón, to his credit, took the risk of publicly acknowledging mounting calls for a debate on a change of counter-drug strategy; he decriminalised the possession of small quantities of almost every drug during his presidency.
American politicians are much more cautious. California, which has historically led the way on progressive laws, voted against the legalisation of marijuana in November 2010. Lacking support, the idea has been dropped from the ballot in this year’s election. The conventional wisdom is that if California doesn’t legalise it, no one in the United States will.
As for Mexico, the future remains unclear. Police reforms, which officials hope will instil a measure of trust in the authorities and allow state forces to maintain a semblance of security without having to resort to using the military, are slogging their way through a gridlocked congress. Peña Nieto has also proposed the creation of a national gendarmerie under civilian control. Judicial reforms, which introduced trial by jury in some Mexican states for the first time, have been enacted. However, most Mexican officials concede that it will be impossible to eradicate the drug problem entirely. Their best hope is to make Mexico so difficult for drug traffickers to navigate that they are forced to go elsewhere. Some hope indeed.
Malcolm Beith is the author of “The Last Narco: Inside the Hunt for El Chapo, the World’s Most Wanted Drug Lord” (Penguin, £9.99)