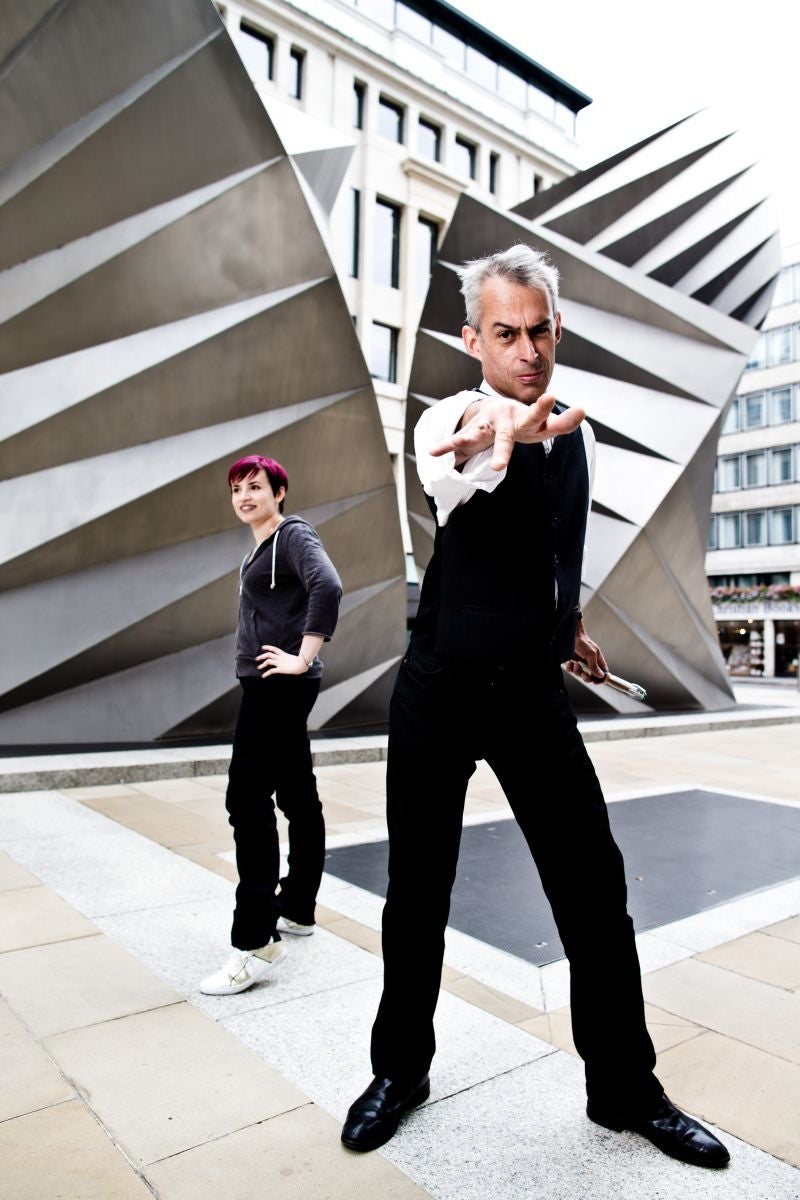 Unleash the psychic paper: our own Doctor Lezard and his companion Captain Penny. Photograph: Charlie Forgham-Bailey

“Doctor Who” returns to our TV screens on 23 August with a brand new Doctor, Peter Capaldi. That Nicholas Lezard bears a passing resemblance to Capaldi seemed like a good excuse to get our columnist together with our contributing editor, Laurie Penny, to talk about the long-running series.

Laurie Penny They say you never forget your first Doctor and mine was Christopher Eccleston. He was cool, and tortured, and moody and sexy.

Nicholas Lezard Patrick Troughton was my first Doctor, so I liked the way Matt Smith channelled him. When Eccleston came along, I had to readjust – it was very well done, because it wasn’t trying to self-consciously go back to the old Doctor Who. And I had children by that stage and they were watching it for the first time. They got interested very quickly – they got shivers down the back of their necks and they didn’t even know why. It’s as if there’s something ingrained in the British psyche which responds to Doctor Who.

LP And then Billie Piper was the first companion of the reboot; I had to explain to some Americans the other day that, for us, seeing Billie Piper on the screen –

HL You thought she’d walk round singing: “Because we want to!” That’s something that gets overlooked now: how much Russell T Davies was known as the guy who wrote Queer As Folk – this hardcore, groundbreaking Channel 4 series. Added to which you’ve got a companion best known as being . . . I wouldn’t say a female Chesney Hawkes; that would be overly harsh.

LP The fact that Russell T Davies came from Queer As Folk was really important. For a lot of the people who I knew were watching Doctor Who for the first time, that series was really important because of the queer content and the diversity of the characters. Davies’s agenda is incredibly obvious in his run of the show – which all the right-wing commentators thought was terrible – but that’s exactly why I loved it: the idea that there could be a future where everybody was bi and gay and that was fine.

HL There are two great moments on that score. The first is obviously John Barrowman [Captain Jack Harkness] – when he kisses Rose and the Doctor goodbye and gives them exactly the same kiss – but also the bit with Lesley Sharp’s character in Midnight, which is one of these claustrophobic episodes set inside a cargo container. There was a reference to a partner of hers, and it was just “she”, and that was fine.

Did all of that gender politics leave you cold, Nick, or did you appreciate it?

NL It didn’t leave me cold; I like it. Russell T Davies deserves some kind of official recognition for what he’s done, not only bringing traditional families back together – you’ve got people from different generations saying, “Quick, Doctor Who is on” – but also inserting into that the notion that there are other kinds of relationship as well.

He did it deftly, charmingly, and with just the right amount of bravery and humour. He is exactly my age, so I suppose what I feel about Doctor Who is pretty much what he feels about Doctor Who. He was always going to be mindful of my generation’s sympathies and ideas of the show.

HL There were some cracking episodes. School Reunion, the one where Sarah Jane comes back . . .

HL That’s going to be blubtastic for anyone over a certain age, isn’t it?

The other great ones are The Family of Blood, written by Paul Cornell, which is based on a book, and the Steven Moffat episodes . . . But can you get over the absolute stinkers? I mean, Love and Monsters, which ends with a guy saying that his girlfriend’s turned into a paving slab and they still have a sex life . . .

NL Was that the one with the fans?

LP Children’s drawings and monsters made of human fat are generally things to avoid. But if you look back on the old ones, even the deftly scripted episodes have terrible special effects. What is it, The Ark in Space? Where everyone’s terrified of the maggots that have infested the space station and it’s a man in a green sleeping bag, wiggling down the BBC corridor?

HL The regeneration of Colin Baker has to take top honours, with that wibbly-wobbly music in the background. Nick, do you have a favourite from the old series?

NL One thing that they’ve lost is the excitement in the theme music. The original theme, where you’d see these psychedelic patterns that gradually merged into Patrick Troughton’s face, was terrifying. To watch that as a three-year-old is why I can remember my childhood so well; that image was seared into my mind. And also the strange simplicity of Delia Derbyshire’s electronic arrangement has been a little lost with the over-orchestration of the theme tune.

LP You can’t hear the theremin?!

NL You can just about hear it. I liked it very much when they did the 50th-anniversary episode, when they suddenly went back to the William Hartnell theme music and graphics. I jumped up at that point.

My children told me to shut up; they were watching the show –

LP I loved watching Doctor Who with your kids. Me and Nick used to live together, for people who don’t know –

HL For people who missed all those columns that you both wrote.

LP Yes. So we would always watch Doctor Who, and it was an interesting experience, watching these little boys watch it for the first time.

HL It’s great watching it like that. All they really want is a good, scary baddy, preferably dripping ooze. It’s nice to be reminded that you might be sitting there thinking, “Well, this isn’t really enough like The Usual Suspects for my taste,” but that’s not what they had in mind while they were writing it.

Something I miss from the series before the break is that they would do a plotline over six episodes, say. They’ve ended up relying on two-parters more and more, because trying to squeeze a set-up, a decent story and a resolution into 45 minutes is hard, particularly if they have to sell a new race or something complicated.

NL You can do it, I think, with things like the Weeping Angels; that wasn’t a two-parter and that worked very well. And those “Doctor-light” episodes.

LP Back in the day, Steven Moffat taking over the writing of Doctor Who was going to be the best thing ever (rather than the disaster for its gender politics that it has become), because he wrote The Empty Child and The Doctor Dances, and the Silence in the Library double-parter, and Blink, and The Girl in the Fireplace, all of which were among the best episodes of the reboot. But under him as showrunner it became, as it always does, a different show.

HL Russell T Davies’s book talks about how he had to do all the polishes of everyone else’s script, and write the season finales and openers himself. There was a criticism by a Seventies Doctor Who writer that Davies became a “first-draft writer”. He would have these amazing ideas and throw them all down, but he never did the work you had to do to make it come across as very tight.

The opposite happened with Steven Moffat: he was such a tight writer, everything like clockwork, that he came to rely on it too much, and ended up reusing the same characters and tropes. Which is why you get these extraneous appendage women who turn up and constantly need saving.

LP I think this is where Nick and I disagree. I am not a fan of the way the companions have been used after Donna, who was the best thing that’s happened to Doctor Who companions in many, many years –

NL She really grew on me. I was worried at first; I think everyone was.

LP But the latest companions – the “Impossible Girl”, the “Girl Who Waited” – they’re not real people; they’re stories that happened to the Doctor. They’re not characters in their own right. And the other thing Moffat has done is get rid of having the companion’s family, unlike Russell T Davies. Both Clara [played by Jenna Coleman] and Karen Gillan’s character [Amy] have no family whatsoever, functionally, whereas the Tylers were brilliant. Martha’s family were great, and Donna’s strange, difficult relationship with her mum . . .

HL Mickey. I love Mickey. When he turns up and gets stuck in a wheelie-bin . . .

LP The hapless boyfriend was fantastic.

HL Doesn’t it come down to the different ways they see Doctor Who? Russell T Dav­ies saw himself as the companion. I sense Steven Moffat sees himself as the Doctor, rescuing ladies . . .

LP Well, he has written a grumpy, middle-aged Scottish man as the new Doctor. But the reason you can talk about Doctor Who for ages is that it functions now in the way that sagas and myths used to function. You have to start talking about Doctor Who, and a few other cultural artefacts, like Star Trek, in the same way. The story has been told by so many people; the canon and the history are so long that they are bigger than any one writer, than any one fan.

NL There’s something Homeric about it. It’s been transmitted from generation to generation for 50 years. People think about themselves as Doctor Who or as the assistant.

HL If you could be a companion, which one would you be?

LP Captain Jack. Sorry, I didn’t have to think about that.

HL Are you on board with being Captain Jack in Torchwood as well, where you have to be sealed in a box and then die every two seconds for 2,000 years?

LP I would get to snog Spike from Buffy, which would make it all better.

NL I think . . . who was the one who was the savage girl, who wore the leather bikini, who said, “Shall I kill him now, Doctor” and he said, “Well, maybe not actually.”

HL A companion from the famous “one for the dads” era of the Seventies, I think.

NL No, I liked the boldness of her character!