Icon Theatre’s Release is political fringe theatre inside and out: winner of the Fringe First Award at Edinburgh last year, the play at the time found itself in the context of the riots which had spread across the country. Now in the tent venue of the Arcola Theatre in Dalston, it revisits the ongoing issues surrounding the criminal justice system in the UK.

Release follows the lives of three ex-offenders from the day they are released from prison. The production, devised entirely by the company,  is based on two years of extensive research and interviews with ex-offenders, probation officers, criminologists and hostel managers. And each situation is unique, exposing the complexities of criminal psychology and the randomness of reform.

The sense of entrapment, of pent-up frustration, is dominant even as the audience enters the tent. The three actors are each confined to a panel of the stage where they perform push-ups, jog on the spot, mime the rolling of cigarettes; the constricting routine of cell life, all to the sound of the tinny tannoy of Big Brother speak and metal upon metal. When the inmates are released, they are still trapped in their own minds, confused about who they are and their place in the world.

Becky leaves prison a bag of nerves. She trusts nobody, least of all herself, and yet has the extraordinary determination to find employment and turn her life around. That she has clearly changed since her conviction makes a positive case for the rehabilitative power of prison; that she is rejected from 63 jobs because of her record makes us question the point. Though much of her mental state is like that of a child, for Becky, the concept of starting afresh is a farce. 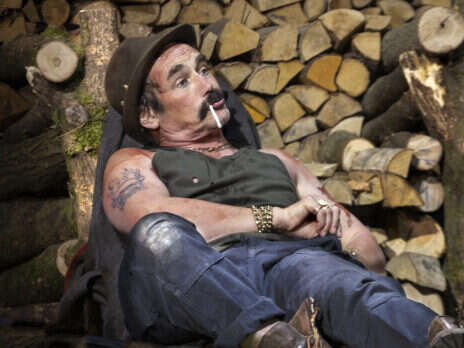 Kyle is a cheeky Scotsman who has a slightly more positive approach: prison has not rid him of his cockiness, nor his communication skills. He shouts and swears profusely, but he is laid-back rather than angry, telling touching stories of his childhood and enthusing about his favourite films. He befriends Minoj, who lives in the same hostel, and though the two men couldn’t be more different, their rapport is touching. Though Kyle struggles to find work and adjust to the real world, his face comes alive when they are together.

Perhaps because of his reserve, Hitesh’s character seems slightly less well developed than the other two. With a black leather jacket and a cigarette behind his ear, he epitomises the East London geezer: passive-aggressive, detached and seemingly uncaring. The relationship with his middle-class probation officer is humorous, cruel, yet also seems slightly unrealistic.

It is easy to take for granted the acting skills of a top theatre company. But when actors embody characters as superbly as this, you can’t help but notice. Verity Hewlett uses her entire body to accommodate the role of Becky: stooping and shifting her eyes from side to side, taking short, shallow breaths and fidgeting constantly. Hewlett is also present in Hitesh’s story, as his middle-class probation officer, a role that is equally brilliantly observed, and hilarious in its parody.

Shane Shambhu flits between two very different roles with just as much ease. While Hitesh is a moody Cockney, Minoj, an important part of Kyle’s life after his release, is a PhD student from Bangalore whose accessories are his spectacles, Tupperware and mug of tea. Shambhu’s Indian accent could not be more authentic, nor could his penchant for malapropisms, the present participle, and the traditional Indian head wiggle.

And Jason Harvey, who plays rough and tough Kyle, is just as apt as the sensitive florist who works with Becky.

Release has a didactic element, too: on the broken doors at the back of the stage – presumably symbolising the never-ceasing barriers that the characters come up against – is projected, at one point, the shocking statistic that in 2011, 27% of male ex-offenders found employment – and only 13% of their female counterparts. Though Icon could well have exploited this practice further, the figure in its isolation stays with you and leaves far more of an impact than it would were it drowned in endless statistics.

Every few scenes are interspersed with an ensemble episode of the three characters, presumably back in prison, venting their frustration through the mimes of smoking, boxing, exercise.  They talk over each other in buzz words and phrases, accompanied by the thud of bass and getting louder and louder until the scene reaches its climax. This feels strained and awkward, rather like a school play that is trying too hard to be edgy. But it is the play’s only real flaw, and the power of the individual stories overshadows it so well that it hardly matters.

Bringing Release to London is only a good thing, because the more people who watch it, the better. It will compel audiences to more effectively understand the ex-criminals who are so ostracised from society, and to begin a dialogue about the justice of crime and punishment.