Manchester City player Raheem Sterling has slammed newspaper coverage for fuelling racism, following an incident during a match against Chelsea.

While an investigation into the alleged racist abuse from the stands is underway, Sterling has warned the press that their headlines and stories about black players are a factor behind this behaviour.

Contrasting judgmental Daily Mail coverage of Tosin Adarabioyo (“Young Manchester City footballer, 20, on £25,000 a week splashes out on mansion on market for £2.25million despite having never started a Premier League match”) with a similar story about a white player (“Manchester City starlet Phil Foden buys new £2m home for his mum”), Sterling wrote in an Instagram post:

“I think this is unacceptable both innocent have not done a thing wrong but just by the way it has been worded. This young black kid is looked at in a bad light.

The long shadows over English cricket

“Which helps fuel racism and aggressive behaviour, so for all the newspapers that don’t understand why people are racist in this day and age all I have to say is have a second thought about fair publicity an give all players an equal chance.”

Good morning I just want to say , I am not normally the person to talk a lot but when I think I need my point to heard I will speak up. Regarding what was said at the Chelsea game as you can see by my reaction I just had to laugh because I don’t expect no better. For example you have two young players starting out there careers both play for the same team, both have done the right thing. Which is buy a new house for there mothers who have put in a lot of time and love into helping them get where they are, but look how the news papers get there message across for the young black player and then for the young white payer. I think this in unacceptable both innocent have not done a thing wrong but just by the way it has been worded. This young black kid is looked at in a bad light. Which helps fuel racism an aggressive behaviour, so for all the news papers that don’t understand why people are racist in this day and age all i have to say is have a second thought about fair publicity an give all players an equal chance.


Sterling himself has been the focus of a vitriolic obsession by the media over recent years, with newspapers picking over aspects of his personal life in a tone that has given off more than a whiff of classism and racial prejudice.

Take the time he himself bought his mother a house. He was “OBSCENE RAHEEM”, “showing off” his “blinging house” according to the Sun’s front page in 2016, after Sterling posted a picture of a sink in the house he’d bought (the splash failed to mention that it was for his single mother who raised him): 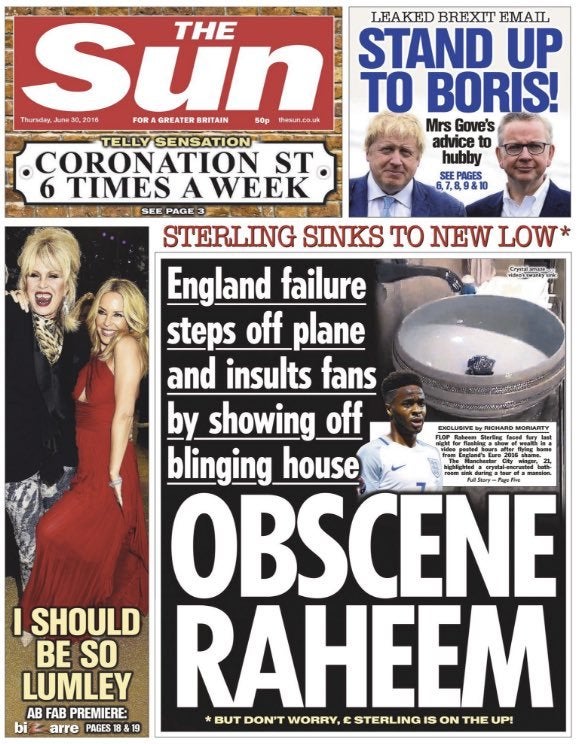 In fact, all of his spending decisions are torn apart in a way no white player would have to endure.

The Mirror in 2015 cried “DON’T BE SO GREEDY” from its back page regarding Sterling’s pay negotiations – something all top players are involved in – while the Daily Star mocked his “FILTHY £50k Mercedes” in 2017, as if he doesn’t deserve an expensive item because he doesn’t know how to look after it. 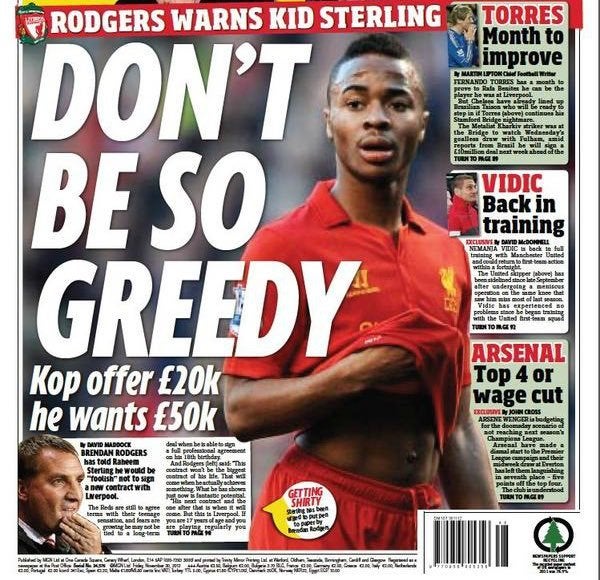 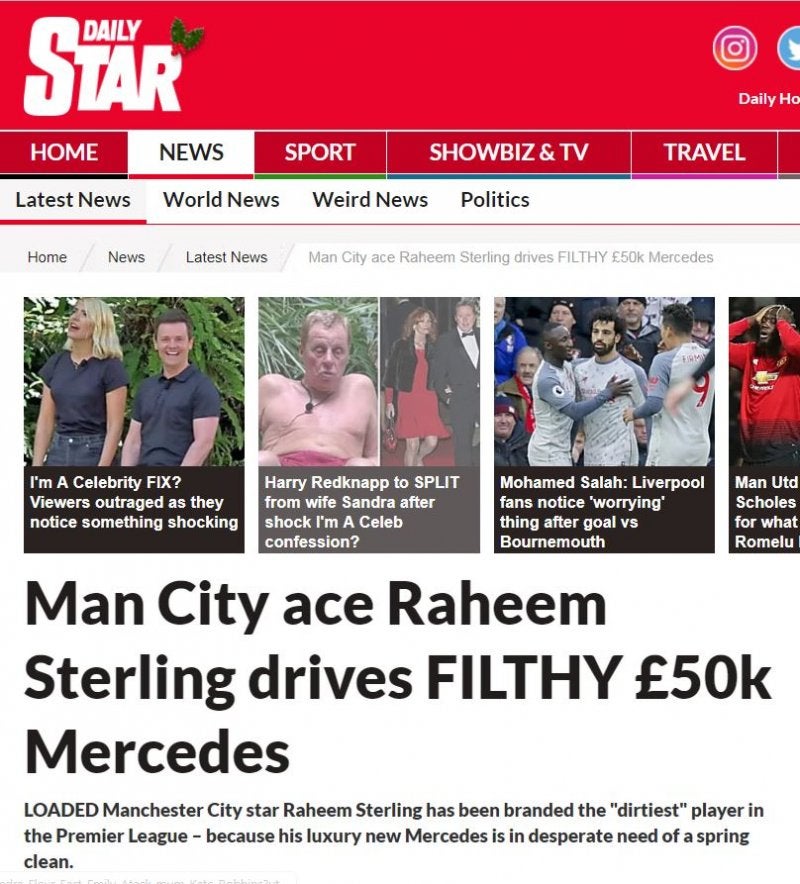 Before a Euro 2016 match against Iceland, one broadsheet reported that Sterling had been recalled to play in the match – embedding a ticker to inform readers of how much money he’d earned in the time it took to read the article.

Simultaneously, there were stories mocking him for eating pasties from Greggs, shopping in Poundworld (when “he’s happy to splash his cash on £500,000 Bentleys”, according to the MailOnline), and flying with EasyJet. 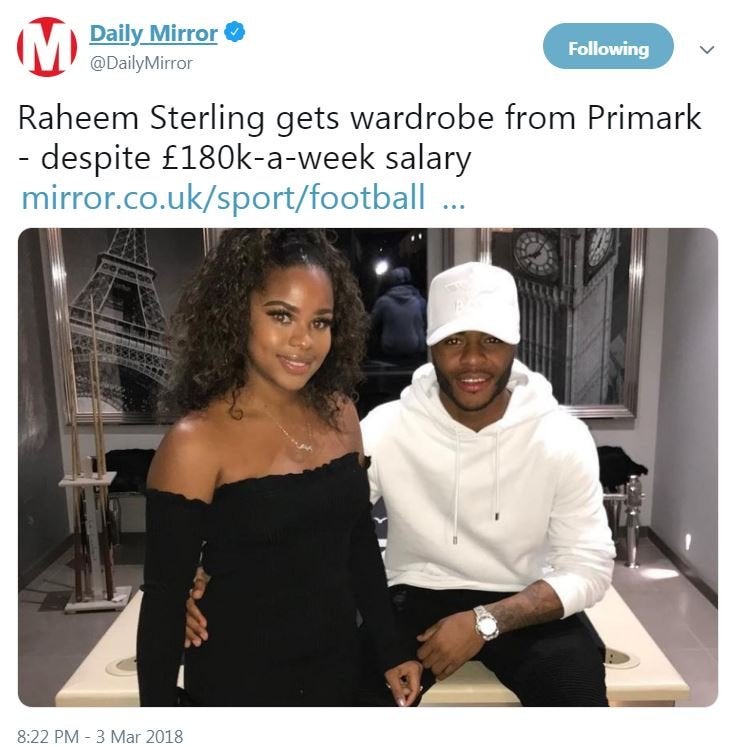 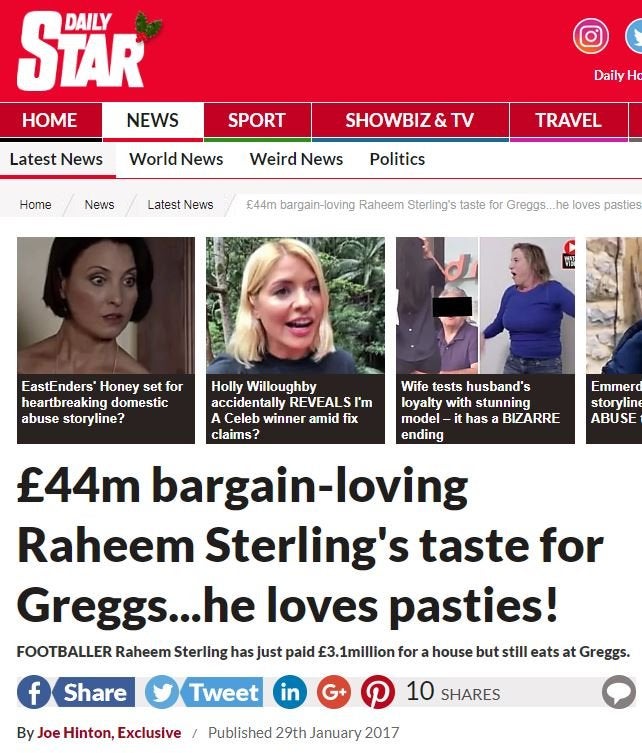 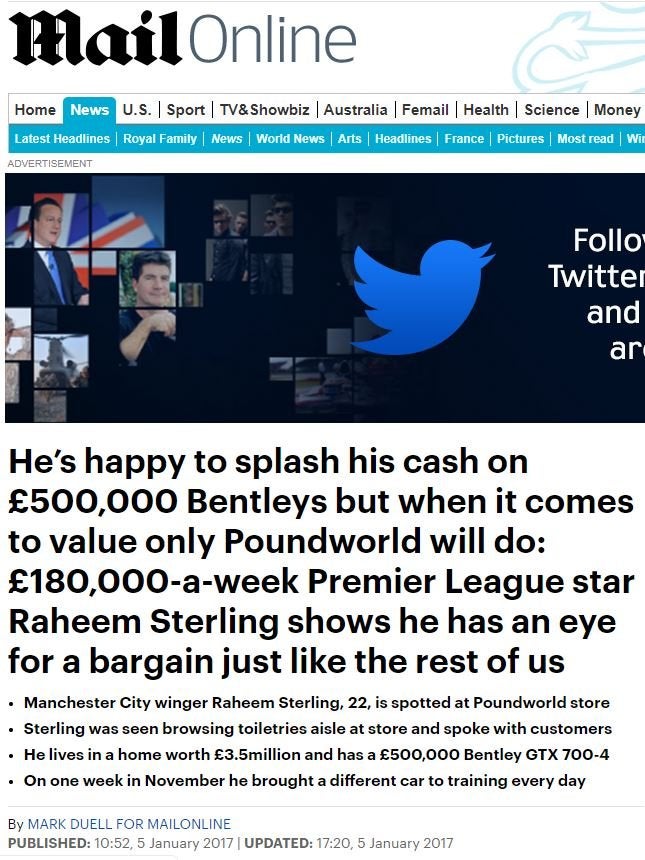 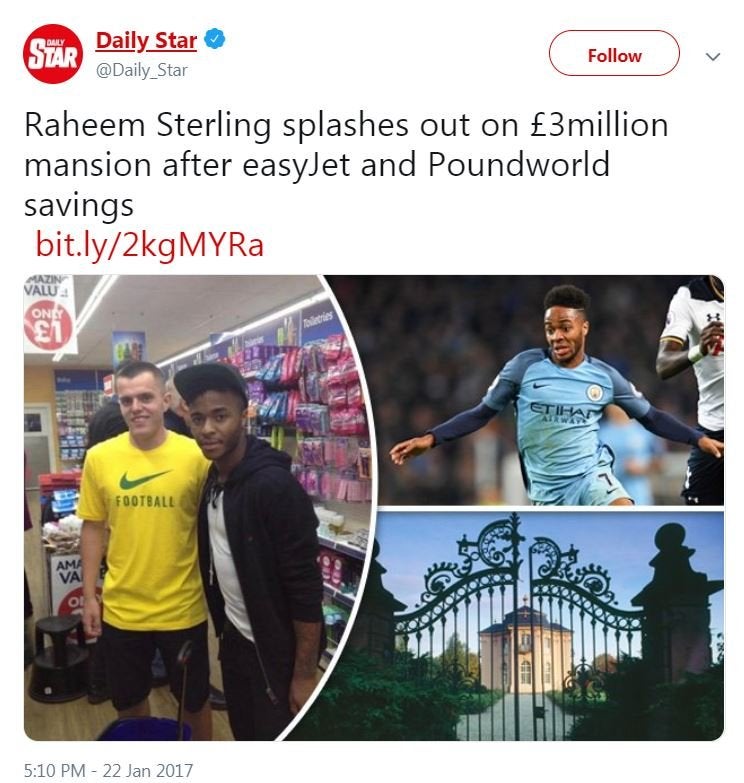 If he earns and spends a lot, he’s flashy, spoilt and undeserving. If he shops normally, he’s ridiculed.

A recent example of troubling coverage came from the Sun ringing up anti-gun groups to see if he should be banned from playing in the World Cup earlier this year due to the tattoo on his leg: 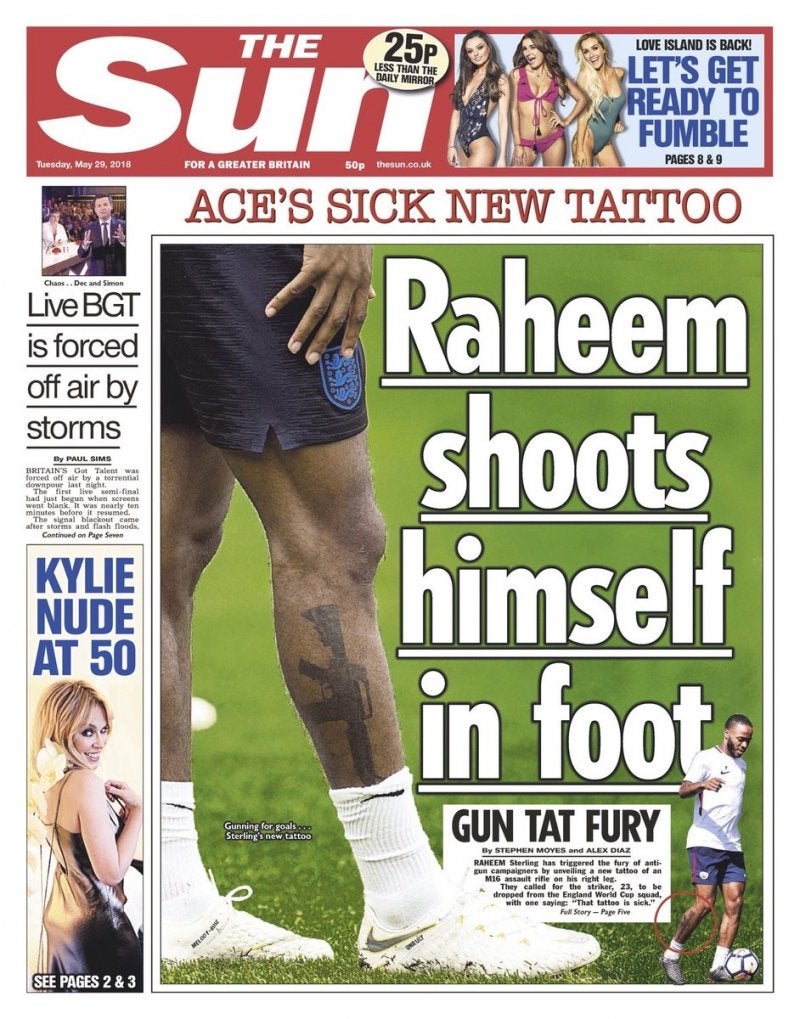 “ACE’S SICK NEW TATTOO,” screamed the paper, ignoring his side of the story – that it was in tribute to his father who was shot dead in Jamaica. Sterling wrote on Instagram that he had “made a promise to myself I would never touch a gun”. He was two years old when his dad died.

Then there’s the fixation on his relationships – he’s been called “PREM RAT OF THE CARIBBEAN” on the Sun’s front page in 2017 after being photographed with a female friend on holiday, and called a “love rat” by the Sun when proposing to his girlfriend. 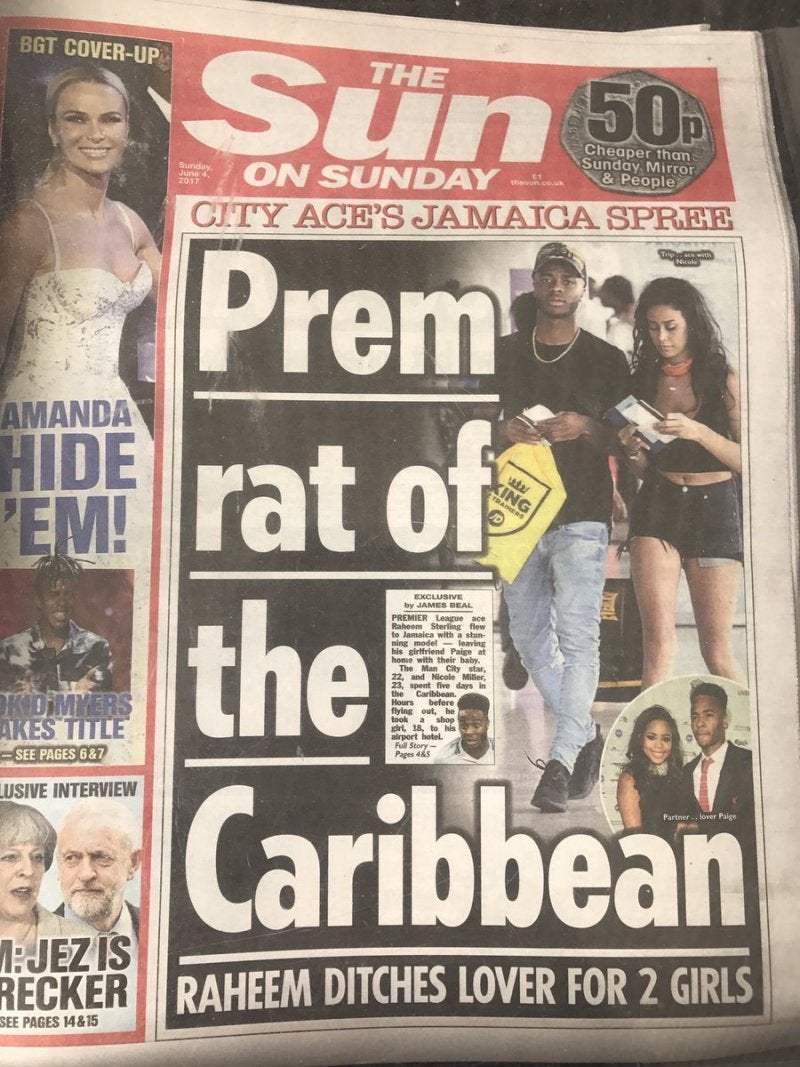 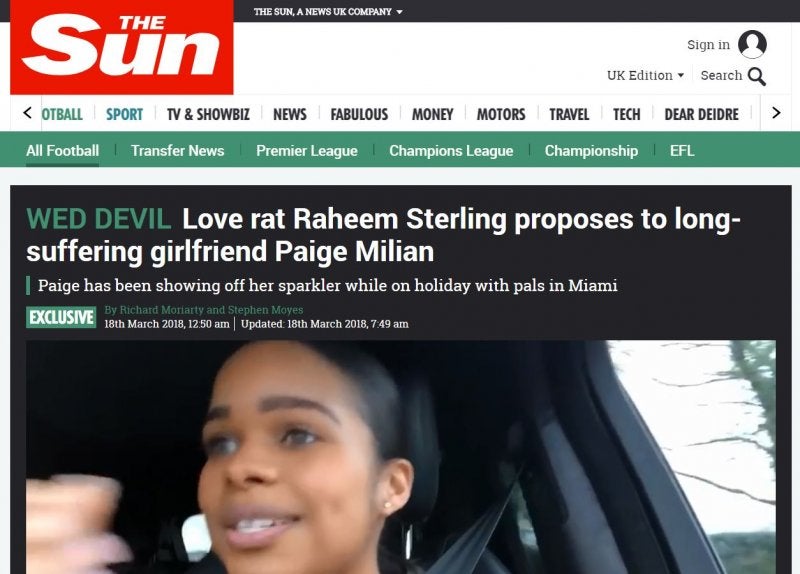 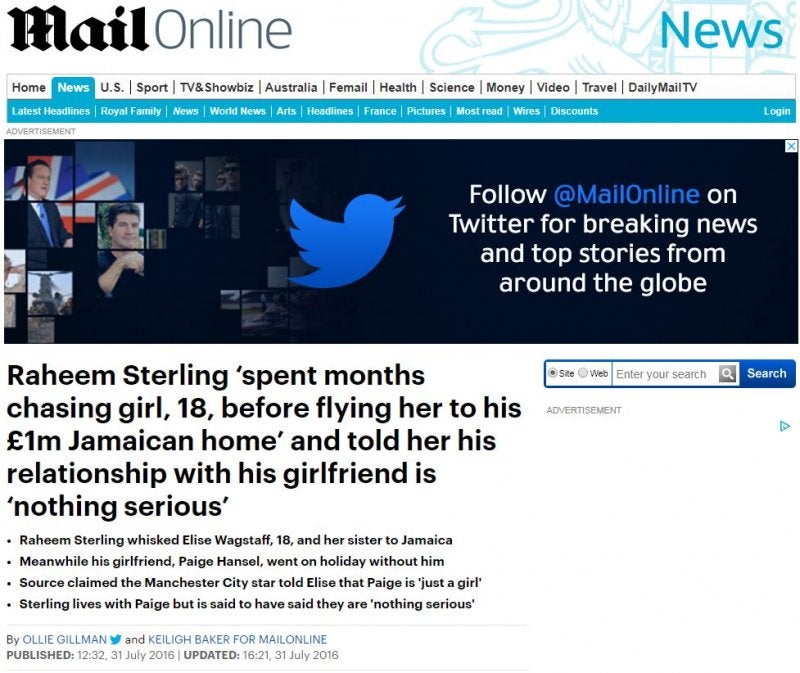 In one tweet in 2016 he was called “troubled youth” and “footie idiot” by the Sun, and he has even been mocked on a Sun splash for looking “tired”, and by the MailOnline for “treating himself” to a “spot of breakfast”. The audacity. 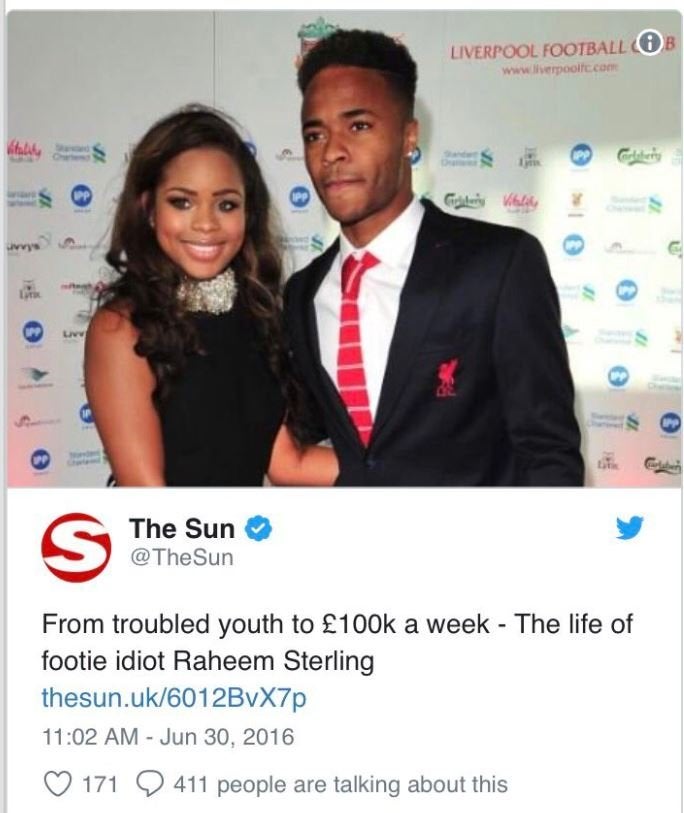 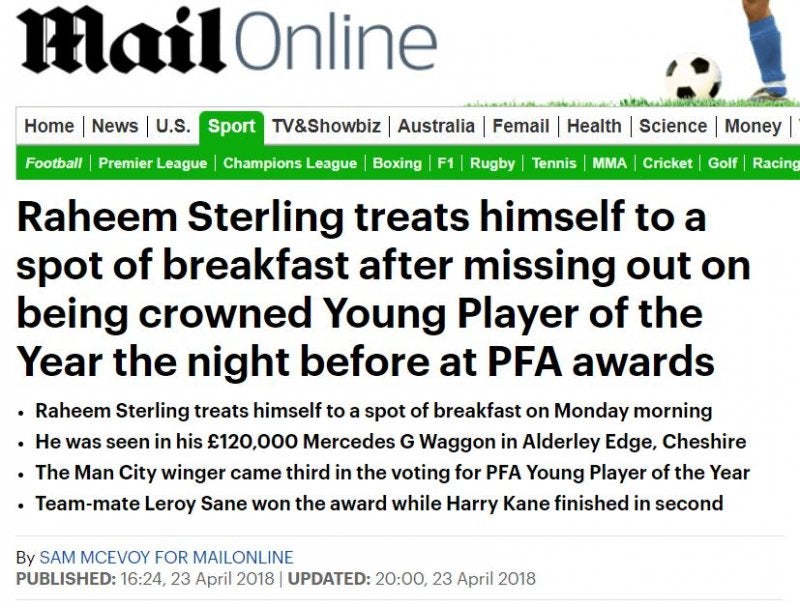 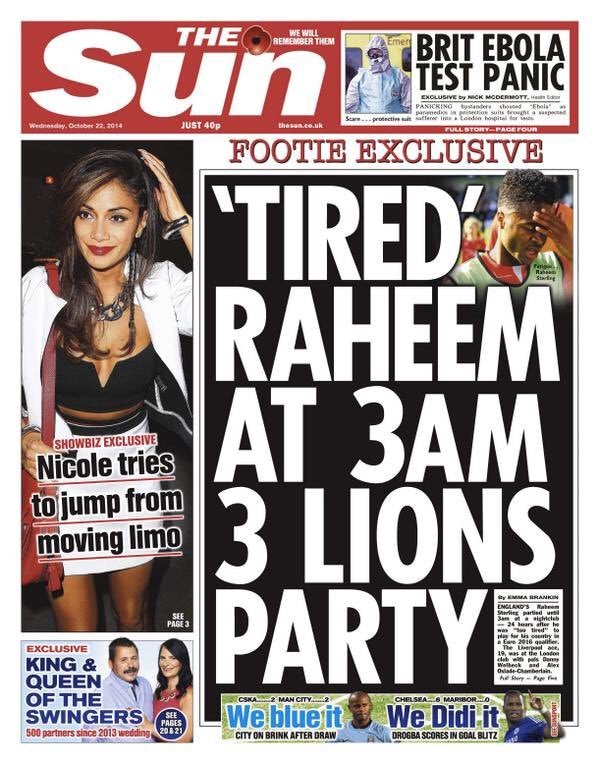 Top footballers have always been showbiz gossip fodder, scrutinised for their wealth and relationship drama. But the tone of stories and headlines that have chased Sterling since his career took off are extraordinary. They suggest that the almost uniformly white press pack of sports reporters and headline writers have an issue with some players enjoying wealth and success more than others. Your mole is pretty sure what the difference is.