I have a pet theory: slow footballers make the best managers. Alex Ferguson, Arsène Wenger and José Mourinho, whose lack of pace and power never allowed him to make it as a professional, all fit the bill. So, too, does Manchester United’s manager, Louis van Gaal, who as a defensive midfielder for Sparta Rotterdam in the late 1970s was said to resemble “a slug on sandpaper”, or a medieval knight clunking around in a full suit of armour.

Tall, bolt upright, he ran, in the words of one spectator, “as if he’d swallowed an umbrella” and would direct games from the centre circle, recycling possession, barking instructions at his team-mates and rolling his eyes at their technical shortcomings regardless of their seniority. He was not only a control freak but a battler, too, his flattened nose testimony to his fearlessness in attacking aerial balls with his “Minotaur noggin”. To his eternal surprise, he was never selected to play for Holland, though he went on to manage the national team twice – an ill-fated spell from 2000 to 2002 and then, by way of penance, at the 2014 World Cup, when he led them to the semi-final in which they were defeated by Argentina on penalties.

As a 28-year-old, van Gaal apprised the Dutch weekly Voetbal International of his belief that “it’s very hard to reach the top unless you’re a cocky bastard”. Yet underpinning his arrogance has always been a remarkable work ethic and desire to learn, characterised by his obsessive note-taking (there is, it is rumoured, a van Gaal archive). While captain of Sparta, he continued to work as a PE teacher in the mornings, training in the afternoon and studying for his coaching badges in the evening. He would drive 180 miles a day between his home in Avenhorn, Amsterdam where he was teaching, and Rotterdam. The fatigue caused him to have three bad car crashes in eight years, though he escaped without severe injury. 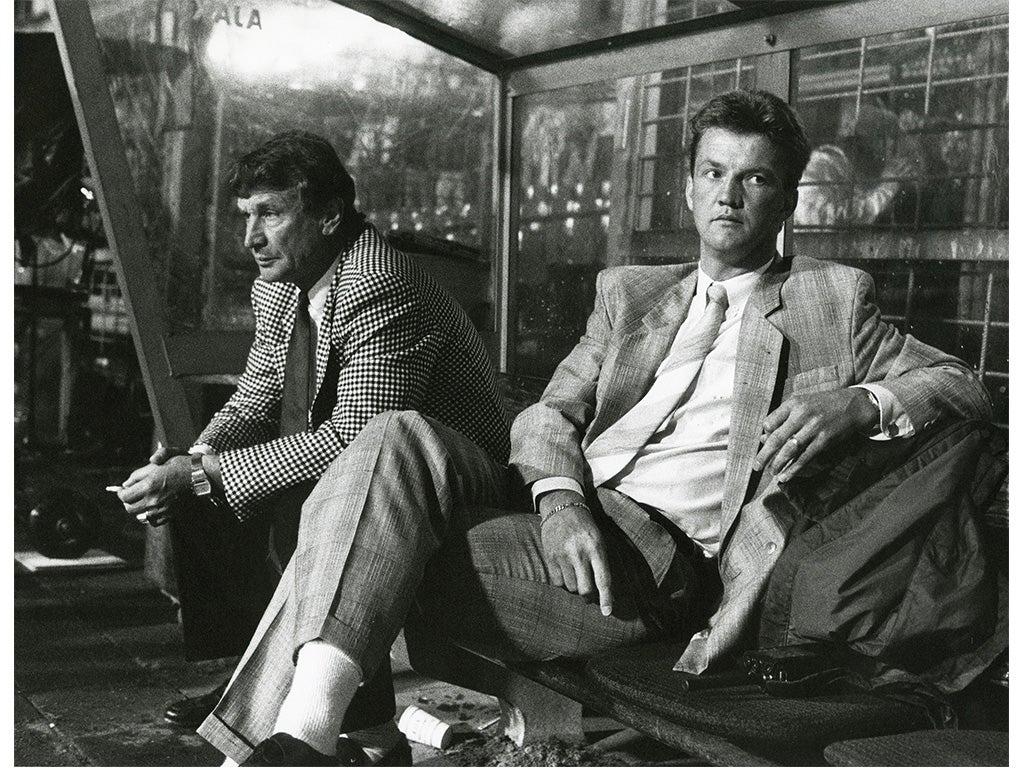 Combativeness, drive and unshakeable self-confidence were traits that van Gaal took into his illustrious managerial career. He shares several things with Alex Ferguson. One is that he gets on well with younger players and thrives off their energy. His Ajax team which beat Milan in the 1995 Uefa Champions League final was celebrated for eight out of the 13 players who made it on to the pitch for that match having come through the club’s academy.

Van Gaal’s tendency to fall out with people is legendary, from journalists and superstar players to fellow managers and club chairmen. The Brazilian contingent during his reign at Barcelona – players with flair such as Rivaldo and Sonny Anderson – found him insufferably dictatorial. Asked if van Gaal thought he was God, Uli Hoeneß, his then general manager at Bayern Munich, replied that van Gaal probably thought he was God’s father. Across the span of his career there have been countless squabbles with the other greats of Dutch football – Marco van Basten, Guus Hiddink, Ronald Koeman and Johan Cruyff, to name a few. The mutual dislike between van Gaal and Cruyff, in whose footsteps he followed to Ajax and Barcelona, is well known.

Yet van Gaal can also inspire the greatest loyalty. In recent years he has made a nonsense of the idea that he cannot work with older players. He has coaxed the very best from Arjen Robben, for Bayern Munich and Holland, and Robin van Persie, whose flying header and high-five with van Gaal at last year’s World Cup was one of the defining moments from the tournament. Wayne Rooney seems to be flourishing under him at a stuttering Manchester United.

The authors of these two books remind us that the Dutch do not do sports journalism quite like the English. Maarten Meijer has degrees in science and philosophy and a doctorate in Russian literature. His judicious and well-researched biography focuses on the man and his methods. We learn how van Gaal’s starting point was Rinus Michels’s “total football” philosophy but he adapted it to the different circumstances he found as a manager in Spain and Germany. He won the double in 1998 during his first spell at Barcelona and repeated the trick with Bayern Munich in 2010.

Though he came close with both teams, he was unable to repeat the Champions League triumph he’d had with Ajax. Yet van Gaal has not been shy in pointing out that he laid solid foundations at both clubs. Is it a coincidence that Barça and then Bayern went on to become the dominant teams in Europe shortly after he left? Not in his opinion. Though Meijer is far from sycophantic to his subject, he makes a good case that van Gaal deserves some credit for the subsequent success of both teams. He enlists the support of players such as Xavi, Robben, Andrés Iniesta, Philipp Lahm and Thomas Müller, who readily acknowledge their debt to van Gaal.

Hugo Borst, an award-winning Dutch journalist and television pundit, is cut from a different cloth altogether. O, Louis is a book about his own tortured relationship with van Gaal, which stretches back to 1978 when, as a Sparta Rotterdam supporter, the teenage Borst watched van Gaal make his debut as a cumbersome new signing. He describes how years later, when van Gaal began to get into the pundit business, a “bromance” developed between the two men. Given van Gaal’s deep, ingrained suspicion of the media and Borst’s own volatility, it was an odd friendship. Sure enough, it did not last.

Throughout the book Borst builds up the suspense about the impending fallout. When van Gaal mistakenly accuses him of passing his phone number on to a journalist and then fails to apologise for the false allegation, the die is cast. This seems a rather inadequate reason for the Roy Keane-like rage that Borst expends on his nemesis. The whole premise of the book is shamelessly self-important and self-indulgent. In fairness, Borst pokes fun at his own obsessiveness and righteous indignation. Although the portrait he paints of van Gaal is sometimes unkind, even cruel, his fascination with the Manchester United manager is itself a form of flattery.

O, Louis is an antidote to the platitudinous nonsense that constitutes much English sports journalism. Part biography and part internal monologue, it is genuinely hilarious – and does not lack the odd piercing insight. “There’s something spiritual about Louis van Gaal,” Borst writes at one point, “just like the Dalai Lama, Charles Manson and Stephen Fry.”

Some of the jokes are unashamedly crude. In Portugal for the 2004 European Championship, Borst recalls how he came to know van Gaal through a mutual friend who described the local wine as tasting like the Portuguese winger Luis Figo “taking a piss on your tongue”. Borst introduces van Gaal to the distinction between a “shower” and a “grower”. “Ever heard that one before, Truus?” van Gaal splutters to his wife, red-faced with delight, and full of Bacardi and Coke. Borst wonders whether his dentures will go flying out of his mouth, as they once did on the touchline at AZ Alkmaar.

Borst is highly regarded as a writer and O, Louis has its serious side. In an attempt to get into the mind of his subject, he goes beyond the usual territory of the football book and seeks the opinion of a range of Dutch personalities. These include a cleric, a politician, a psychiatrist, a theatre director and a poet, as well as the comedian and impersonator Erik van Muiswinkel who, we learn, “does a cracking Ruud Gullit”.

Both authors engage in a little pop psychology to explain the man’s relentless will to win and aptitude for getting into disputes. Van Gaal was the youngest in a Catholic family of nine children and had a poor relationship with his father, whom he remembers as strict and unaffectionate. His first wife, with whom he had two daughters, died of cancer in 1994. Having attended Mass for years, van Gaal lost his faith soon afterwards. “I don’t believe in monogamy,” he says, in a classic van Gaalism, “but I do practise it.”

Van Gaal is halfway into his first season as manager of Manchester United and there has yet to be a major diplomatic incident, though there have been flashes of temper. So what else can we expect from his time in England, in what is likely to be his last managerial job?

The first thing to note is that he brings new ideas to the English game, just as he did to Spanish and German football. He is the bridgehead between some of the best managers in the history of the sport, from Leo Beenhakker – whom he worked under at Ajax and then replaced – to Mourinho, who counts him as a mentor and friend.

At each club he has managed, van Gaal has emphasised that it takes time for players to understand his “philosophy”. Yet this philosophy is quite hard to pin down. His success has been in his pragmatism. At Manchester he has experimented with a 3-5-2 system and a midfield diamond, but there is no set van Gaal formation as there is with Mourinho. In some cases, as at AZ Alkmaar from 2005 to 2009, his teams have played hugely expansive and free-flowing football. In others (Barcelona) the play was more pedestrian. At the Nou Camp the build-up was too controlled, the pattern too predictable. The natives soon grew restless, as some United fans are doing now.

Johan Cruyff’s criticism is that van Gaal’s tactics resemble a “clockwork orange” – in which the various cogs work together but individual initiative may be stifled. Will such an emphasis on patience, possession and positional awareness work in the English Premier League, the fastest in the world? One thing is for certain: the Iron Tulip will not wilt in trying to leave his mark on these shores.