In the middle of the jungle stands Mongomo. The city, at the western edge of Equatorial Guinea, has a population of 7,000 and boasts the second-largest basilica in Africa, along with a compact football stadium, both with a capacity of almost 10,000. The Americans have just finished building a library and a museum and there’s a palace, where the country’s president, Teodoro Obiang Nguema Mbasogo, was born in 1942. It was here that Obiang’s uncle and predecessor, Francisco Macías Nguema, staged his last stand before being toppled by his nephew in 1979.

Macías was the country’s first president after it gained independence from Spain in 1968. He was rumoured to have been a cannibal; he banned private education and western medicine and hanged 150 dissidents in the national stadium in Malabo while an orchestra played Mary Hopkins’s “Those Were the Days”. Then he made the fatal mistake of not paying the military. As the armed forces mutinied, he holed up in a bunker in Mongomo. He was eventually captured and the bunker was set on fire – a strategy that had the unfortunate side effect of burning the country’s foreign cash reserves – and he was executed.

For a decade and a half, Equatorial Guinea struggled on. In 1992, oil was found. The country now has a respectable GDP per capita of $25,900 – though the vast majority lies in the hands of the Nguema family. There is talk that the falling oil price is squeezing resources but when Morocco withdrew from hosting the African Cup of Nations in October 2014, terrified what fears about ebola could do to its tourist industry, it was to Equatorial Guinea that the Confederation of African Football turned.

Who else could host a tournament at short notice but an oil-rich state with a dreadful human rights record? Equatorial Guinea co-hosted the tournament with Gabon in 2012 and did it well. Its stadiums in Bata and Malabo, the capital, needed little work. But the construction of two further stadiums, in the north-eastern city of Ebebiyín and in Mongomo, was speeded up.

Getting an idea of the true cost is all but impossible. When South Africa, the only non-oil state in Africa capable of hosting tournaments, stepped in to host the 2013 Cup of Nations after it became clear that Libya couldn’t, it cost around $44m. I bumped into the sports minister, Francisco Pascual Eyegue Obama Asue, in a restaurant in Ebebiyín. He could only give a vague figure of £10.5m for each of the two new stadiums, while acknowledging that the rush to complete the projects had pushed the price up.

The unbreakable spirit of Andy Murray

Obama Asue stressed that Equatorial Guinea hadn’t volunteered as hosts. “The Confederation of African Football asked us and we said yes,” he told me. “We were the last resort. If no one could, it would have gone to Qatar. It would not have been good for this tournament, a celebration of African football, to be cancelled or moved outside Africa. For that reason the president agreed. Africa has to consume what is African.”

This is a recurring motif. Equatorial Guinea seems to have made deliberate efforts to raise its profile over the past four or five years, hosting the African Union summit in 2011 as well as the Cup of Nations. “When we are asked, we are ready to help,” Obama Asue said. “There is a sense of satisfaction, of course, that the rest of Africa trusts us to do it.” 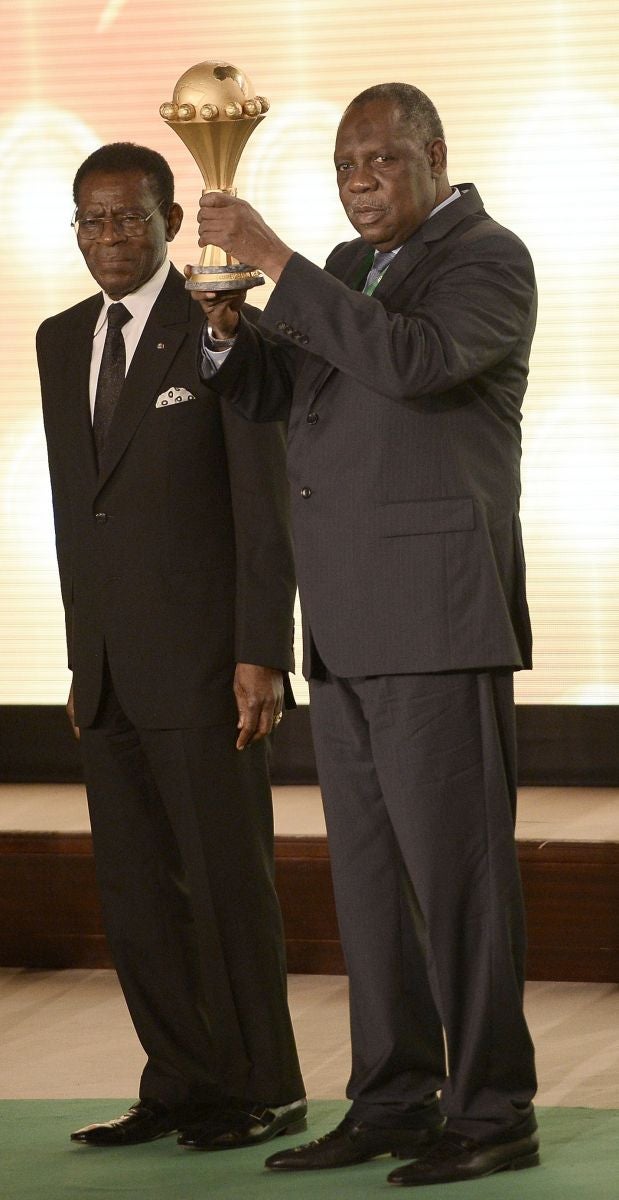 President Obiang is now 72. There is a feeling that he is preparing the country for a future without oil – precise information is hard to come by but it is rumoured that production has peaked – and without him. The effect of US, Chinese and government investment, even over the three years since I was last here, is startling. Most remarkable is the six-lane motorway that cuts through the jungle, connecting Bata with Mongomo and reducing a three-hour journey to an hour and a half.

Technically it’s not open yet. Apparently, Obiang is waiting for the Pope to come and cut the ribbon. British consultants overseeing the construction of a technical college in Mongomo speak of how sensibly Obiang’s grand project has been planned, getting the infrastructure right before putting up too many eye-catching buildings. Yet the human rights issues remain. Before the opening game in Bata, an opposition leader, Celestino Nvo Okenve, was arrested for handing out flyers and T-shirts urging people not to attend the tournament.

So far, understandable teething issues aside, the Cup of Nations has been a huge success, played out before packed stadiums. The flaws of Obiang’s government are manifold but in this it has done an incredible job.