Every edit to Wikipedia is public, as is the profile of every editor. Many of those who use and maintain Wikipedia set up profiles and take part in the chat that makes up the larger editorial community, but most editors are anonymous – they leave on a record of an IP address, and often make only a couple of edits at most. (Lots of these anonymous accounts are spammers or vandals, and the “real” editors spend a lot of time clearing up after them.)

If you know someone’s IP address, then, it’s relatively easy to keep track of any edits they might make. This was the thinking behind @ParliamentEdits, a Twitter bot set up to track any and all edits to Wikipedia made by the known block of IP addresses assigned to the Houses of Parliament. It in turn gave birth to similar bots keeping tabs on, for example, the US Congress, or the government of Canada. There have been a spate of stories over the last year about government employees making anonymous, malicious edits to Wikipedia pages for political purposes, thanks to these bots – like Channel 4 discovering that someone was trying to downplay the murder of Jean Charles de Menezes.

Channel 4 actually set up its own bot, @WhitehallEdits, to cover the known IP addresses for government computers on Whitehall which take up a different block to those used by Parliament, to spot the occassional bit of vandalism by a government employee somewhere.

But instead it’s mostly keeping tabs on a civil servant with an obsessive interest in Scottish football:

After the England-Germany game, I have a cunning plan to win the World Cup

I first noticed back in August that – most often over the course of a Monday morning – someone was spending a lot of time making sure that the stats of Scottish league sides were kept as up-to-date as possible with results from the weekend before.

Today, though, whoever it is has been on overdrive – there were forty consecutive football edits within a period of a few hours: 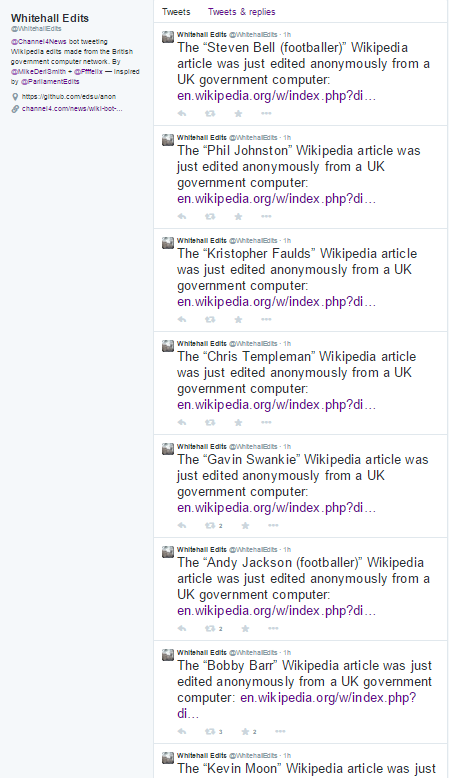 Looking through the edit histories of some of the IP addresses within the block (like this, or this) shows that no single address makes all the edits, nor is any single address responsible for only football edits. That’s unsurprising – Whitehall computers all connect to the internet via Government Secure Intranet proxies, and it’s the IP addresses of the proxies that @WhitehallEdits is keeping tabs on. We can’t see beyond it to the computer (or computers) responsible, and Freedom of Information requests for that kind of info in the past have been rejected.

It seems safe to say there’s a civil servant somewhere who’s taken on the job of making sure Wikipedia’s records of the Scottish lower leagues are up-to-date, then. But who? And how has nobody noticed this person is spending so much of their weekly office hours updating goal tallies on Wikipedia?