Did you ever wonder where they came from, that constant stream of transfer rumours? Were the top journalists snooping around the training grounds, listening to gossip? Did members of the public really see Footballer X’s wife shopping in the Arndale Centre, concluding he was bound to be making a big move?

Or – and let’s try and put this as delicately as possible – was it all made up?

Today, the antics of tweeter ‘@footballagent49’ have shone a light into a murky world. Footballagent49 amassed 40,000 followers in a short space of time, delivering plausible enough stories and claiming retrospective credit for big scoops. But today the tweeter said:

“I am not a ‘Football Agent’ or ‘ITK. [in the know]’ I am infact an 18 year old and I have been fooling all of you gullible idiots with my fake stories for the past 2 months.

“I’m proud to say that I haven’t had even one transfer scoop in my time yet people still say im [sic] more reliable than Sky Sports News and the BBC. Laughable. Some of my personal highlights were the Kaka and Falcao stories which were completely made up.”

Footballagent49 added: “The Daily Mail even wrote an article based on my Kaka tweets and the 2 journalists who wrote it were following me.”

Did that happen? Let’s look at the evidence. On the evening of August 18, Footballagent49 tweeted: “Manchester United asked Madrid on Friday about taking Kaka on loan. Club officials are confident a deal can be done but its [sic] early stages”.

The next day, the Daily Mail published this story, saying: “Kaka has been offered to Manchester United on a season-long loan as Real Madrid prepare for the arrival of Luka Modric.”

As is always the case with these rumours, they were kicked around by most of the rest of the sportsdesks, hungry for the latest news on the biggest clubs. The Guardian wrote: “Real Madrid are hoping to free up a dressing-room peg for [Luka Modric] by offering Kaka to Manchester United on loan.” The story also appeared in other papers’ round-ups.

Except, was there any truth in it at all? When you think about it, why would a football agent bother to tweet his secret deals to Twitter when it could jeopardise his earnings? Does it matter if we can’t believe what we read in a ‘trivial’ subject like football, or does that tarnish the reputation of the rest of the paper?

Neil Ashton, one of the two Mail journalists mentioned in the @footballagent49 post (and who was still following the account at the time of writing), said in response to one reader asking if he’d regurgitated a made-up story: “Ha, no, not quite… Kaka being offered around was common knowledge.” Maybe the ‘fake’ account had accidentally landed on a genuine possible deal? Maybe it came from another source? You can’t rule it out.

As far as the source’s more recent ‘Falcao to Chelsea’ tale is concerned, that is a re-heating of an earlier rumour. Again, there is a grain of truth making it plausible – but not a great deal.

So, does it matter? Football transfer rumours have been going for years, and are a useful source of stories when nothing else is happening – especially during the summer break and during the transfer window. There are a huge amount of movements that are possible, and can be made to sound believable. If you know a manager who’s looking for a player, and you know a player who’s looking for a move, why not link them, even if they aren’t really linked? What harm does it do? Fans treat most rumours with the contempt they deserve, and (rightly or wrongly) are even more sceptical about those sections than they are about the others.

Every now and then, of course, one of the so-called ‘fliers’ actually takes off, and is proven right. You’ll see ragouts and ‘We told you first!’ triumphant headlines when that does happen; what you won’t see are the dozens and dozens more times when the rumours turned out to be, well, not quite as concrete as they were made to seem at the time. Those failed fliers get quietly forgotten about.

It’s hard to disprove a negative. How can you show there was no truth in a story when a ‘want-away striker’ issues a ‘come and get me plea’ and another club are looking ‘to bolster their frontline’, to use that delightful dialect of the back pages? Probably not. Maybe @footballagent49 is a real agent, and this is just an elaborate double bluff to take the heat away. If by some miracle that implausible guess is correct, remember you heard it here first. 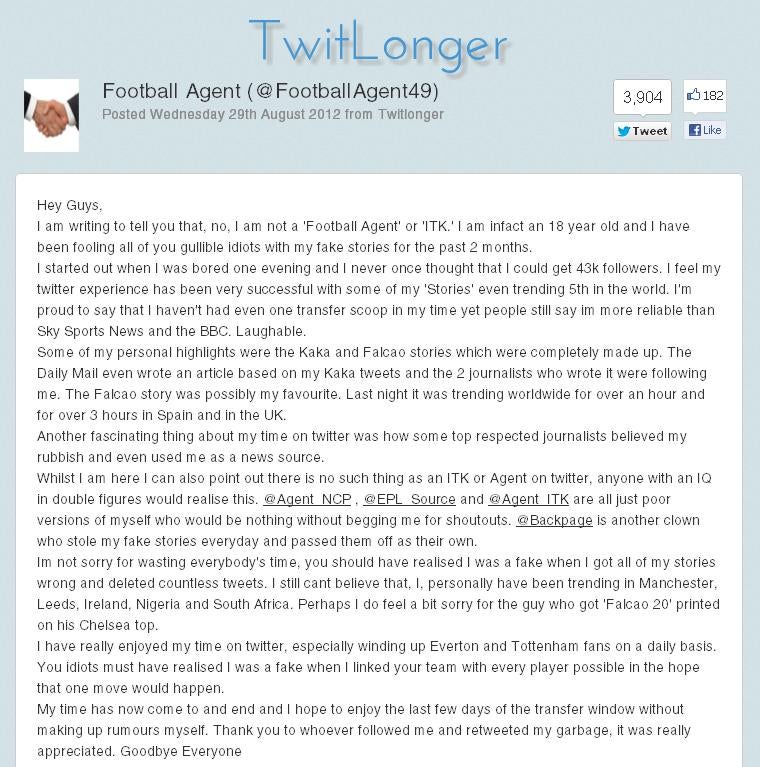