How often do you get a good costume in life? But how sad to grow out of it. I was about five when this picture was taken, and already getting too big for my bird costume.

Before everyone travelled so maniacally (in shameful ignorance, or defiance, of the consequences for the environment), the local newspaper in Evanston, Illinois, the Evanston Review, considered it noteworthy that my family was going off to Rome for a year in 1960. They wrote: “The English professor will be accompanied by his wife, three children and the family dog. They include Stephen, nine, Maud, six, and Lucy, three. The dog’s name is Pierre. They leave 3 September.” Slow news day.

All three of us were soon settled into the American school in Rome – my first school and a gentle introduction to the next 20 hit-or-miss years of education. My sister, a little older than me, was in love with a boy named Andrew in her class. I found a boy named Andrew to love in my class too. 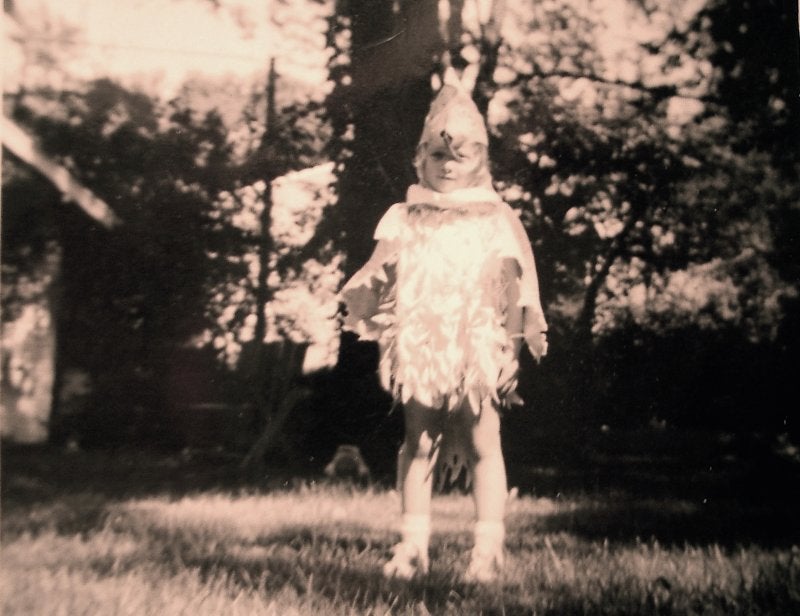 In Italy, my mother learned to say “Pronto!” on the phone. I learned to eat pasta in brodo and twirl my spaghetti. My cheek got painfully tweaked by strangers a fair bit. We had wild tortoises in the back garden. And, once, we made a trip to Naples, where I caught a cold and missed out on Vesuvius.

Most memorably though, I was in a play at school that involved a whole bunch of yellow birds running round and round a little hut, chirping. Was it in aid of Easter? I can’t remember. I think it was just an end-of-year event. Every single kid in the class was cast as a bird, and the teachers made costumes for us all. It took them weeks! They patiently sewed on every feather individually. This was the first time I became aware of sewing as an activity, much less a necessity, and I was deeply impressed by the teachers’ painstaking attitude to the task.

Their labour was not in vain. It had a magical effect: by the time they finished those multi-feathered costumes, we all believed we could become birds. Or I did anyway. We ran maniacally around that hut, cheeping with passion.

I still wish I could wear that bird costume all the time. Is this really too much to ask?