Your eyes do not deceive: Elvis Presley buys a packed lunch from a platform vendor before climbing back on board a train bound (inevitably) for Memphis. He is nearing the end of a 27-hour journey from New York City and he doesn’t have a hair out of place. He is 21 years old, very beautiful, and attuned to occult forces, or he must be, for how else to explain the world-quaking levels of psychosexual energy he is about to unleash by means of honeyed vocal delivery and pelvic gyration. It is the 4th of July in 1956, and this is the Amtrak station in Sheffield, Alabama, a city of 9,000 souls on the southern bank of the Tennessee River.

The photo, taken by Alfred Wertheimer, is not quite what it seems. When I first came across it, I believed this was Elvis in the final weeks before fame descended in a blinding flash but, in fact, “Heartbreak Hotel” had been released in January of the year and had topped the Billboard chart for six weeks. Elvis was en route from New York to Memphis for a concert at Russwood Park – there would be gyrations, there would be jellied knees, there would be sky-renting screams. 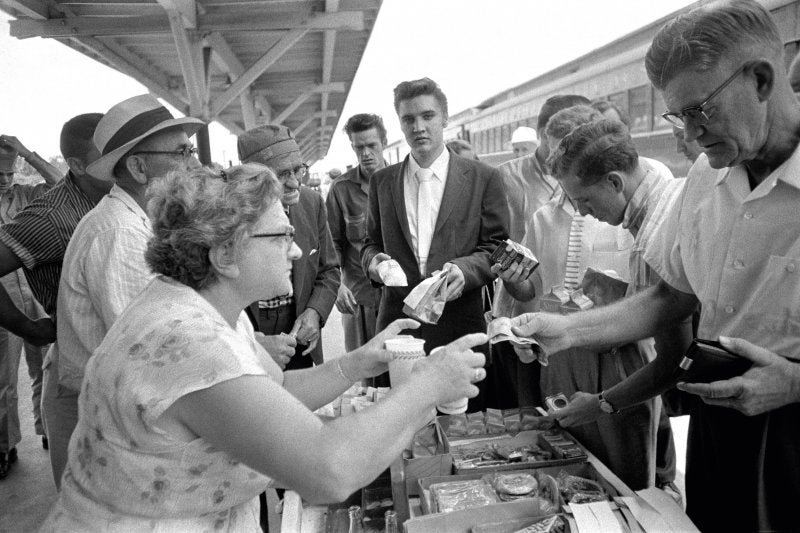 Back in New York, Presley had made an appearance on the top-rated Steve Allen Show and he got in a quick recording session at the RCA studio that yielded “Hound Dog” and “Don’t Be Cruel”. Written by Jerry Leiber and Mike Stoller, “Hound Dog” was a knockabout 12-bar blues in a burlesque mode and nobody took it very seriously – it was originally recorded by Big Mama Thornton, about a woman who tells a gigolo to scram from her house and life.

But it would go on to be Presley’s biggest-selling single, the release that took him way, way beyond an audience of 14,000 at Russwood Park and into the stratosphere – a few months later this photo would not have been possible. But there they are, the citizens of the humid South, a straight-laced looking bunch, all short-back-and-sides and evangelical bearing, and entirely unaware that the boy King is in their midst and staring that camera down. This moment holds forever.