My writing room is crammed with pictures, maps, election posters, knick-knacks and snow globes I have picked up round the world. Some make me smile, some make me sad.

None, however, is quite as poignant as the photo over my desk showing the back of a woman, floaty white scarf draped over her hair, amulets affixed to her right arm powerfully raised, as she addressed a vast crowd in a Rawalpindi park. It was taken on 27 December 2007 and less than an hour later she would be dead.

That woman was Benazir Bhutto, one of the bravest people I have ever met, and she literally changed my life. In the summer of 1987, I had just left university and was interning at the Financial Times when the foreign editor sent me to a lunch of South Asian politicians. I sat next to a man from Pakistan Peoples Party and he asked me if I would like to interview Benazir Bhutto, who was living in London in exile from the military dictator General Zia, who had executed her father. Of course, I said yes.

On the allotted day, I arrived at her Kensington flat to find it crammed with bouquets, as she had recently got engaged. We got on very well and her engagement gave my interview an unexpected peg.

Some months later, I was working as a trainee reporter for Central TV in Birmingham and came home to my rented room in Walsall to find on my doormat the most exquisite invitation I had ever seen. It was to Benazir’s wedding in Karachi. That wedding was not only fabulously colourful, but an incredible introduction to Pakistan. I moved there shortly afterwards and have been a foreign correspondent ever since. 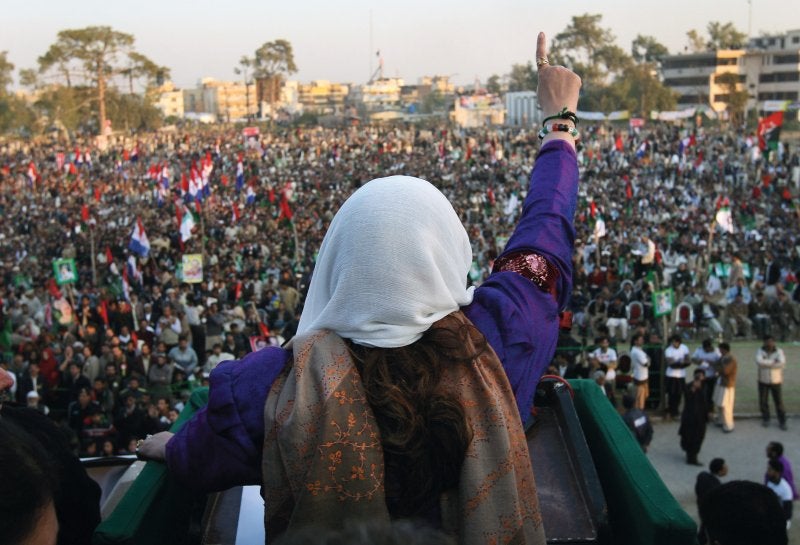 Benazir and I had our ups and downs. After General Zia was killed in a mysterious air crash, she became prime minister. But her government was a disappointment that did little and was quickly mired in corruption. She didn’t like me writing about it, and when I wrote about the generals plotting against her, I was deported.

But I kept going back and forth to Pakistan as Benazir revolved between power and jail. When I got married, she sent me a crystal bowl. Our friendship was revived after another military dictator took over, and she ended up back in exile in London.

When she returned to Pakistan in October 2007, I was with her on her bus, and we were both blown up in the country’s biggest ever bomb. We were lucky to survive, but it was clear to me – as it must have been to her – that whoever was responsible for the attack was not going to stop at that.

It was two days after Christmas that same year, and I was in the whitewashed medieval village of Óbidos in Portugal, when my foreign desk called. “Benazir has been injured,” they said. As she spoke in that Rawalpindi park, shots had been fired, followed by a bomb.

I knew straight away. Tears filled my eyes, but I was with my parents, husband and our young son. Óbidos had been turned into a Christmas village. All around me were grinning elves proffering chocolate cups of cherry brandy. I just wanted to get away.

Shortly after, the call from a mutual friend came to say Benazir was dead.

Christina Lamb is the author of Our Bodies Their Battlefield: What War does to Women (William Collins)