I’m a vegetarian. Have been for 12 smug, tofu-filled years. I don’t eat fish. I don’t eat meat. As I’m fed up of telling my nan, I don’t even eat chicken.

I am a fully paid-up member of what the Alt-Right would call the “soy boys”. A real Lentil Lad. The idea of eating a steak makes me feel queasy in the same way meaties probably feel about salad.

Nonetheless: the latest campaign from PETA makes me want to force a mole through a shredder.

The People for the Ethical Treatment of Animals have, in their infinite wisdom, decided to release a handy chart on how to “remove speciesism” from your language. “Just as it became unacceptable to use racist, homophobic, or ableist language,” they write on Twitter, “phrases that trivialize cruelty to animals will vanish as more people begin to appreciate animals for who they are and start” – oh God – “‘bringing home the bagels’ instead of the bacon.” 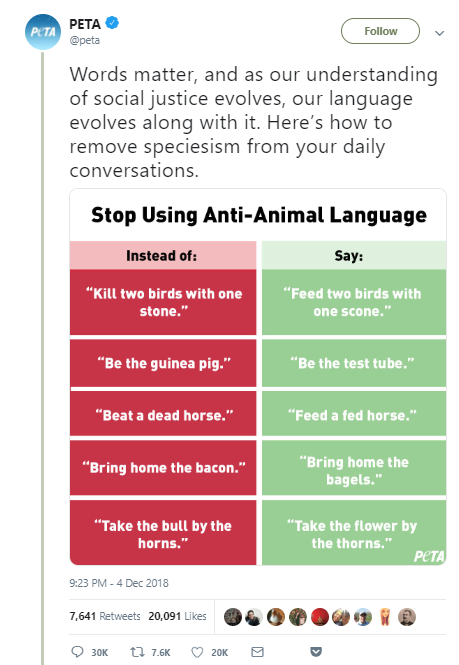 Even leaving aside the fact that “scone” rhymes with “con” not “cone”, the metaphor still doesn’t work. Scones are poisonous to birds, so feeding two birds with one scone is an act of grotesque cruelty. So poisonous, in fact, that pelting the little robins with stones afterwards would count as a mercy killing.

Then comes the phrase “beating a dead horse” which they suggest replacing with “feed a fed horse”. It’s unclear at this stage why PETA believe force-feeding a fed horse to the point of obesity is less cruel than hitting a feelingless imaginary dead horse, but there we are.

PETA appear to miss the problem with violent language entirely. They could have argued that violent language towards animals shapes attitudes towards them. Nobody has ever heard the phrase “choke the chicken” and thought, “Yeah ok I’ll head to a farm, let’s try this”, but at least their argument would have been coherent.

Instead PETA say that their goal is to “remove speciesism from everyday conversations” in the same way that racist, homophobic and ableist language has evolved.

But homophobic and racist language is so horrendous because the people you are being homophobic and racist towards can understand it. No cat’s feelings were ever hurt by calling it a hoity-toity slightly shitty dog. No shark is ever going to develop low-shark esteem no matter how many times you call it a “unimaginative James Bond trap” or a “subpar dolphin twat”.

Altering our language won’t protect any animals other than entirely imaginary horses and cats. It’s PETA are asking the whole world how they speak in order to protect a cartoon mouse.

Sorry to slap a dead dog with second deader dog here, but when we use the phrase “beating a dead horse” we aren’t referring to a specific horse. And any violence inflicted upon imaginary animals – for example, by throwing a shotgun to a monkey and making it duel its wife – has no effect on the real world. Yes, the monkey shot his monkey wife and then developed a drinking habit from the trauma that eventually led to an early monkey death, but only in your own minds.

No animals were harmed in the making of any of these metaphors. Even if they were centuries ago when the phrases were invented, their sacrifice would be worth it for the clarity of language we have now.

The metaphors work, and they’re saving us millions of man-hours. When you say be the “guinea pig” everyone knows that you mean “test subject”. If you say PETA’s suggested alternative, the “test tube”, you then have to spend five minutes explaining, “No, I know the test tube isn’t the subject of a test – yes it is very confusing but what I really mean is guinea pig”. Just say guinea pig. Using the time you’ve saved from not having to explain what the hell you’re talking about, maybe you could rescue a cat.

We’ve spent years building these phrases up. Let’s not ditch this to spare the feelings of animals who could spend decades locked in a room with Shakespeare and still not fully grasp what a simile is.

And if you still aren’t convinced, here’s some real world consequences for my fellow animal lovers: I’ve been a vegetarian since 2006. If anyone dares use the phrase “take the flower by the thorns” instead of “taking the bull by the horns” I swear I’ll start a new career as the most brutal matador the world has ever seen.